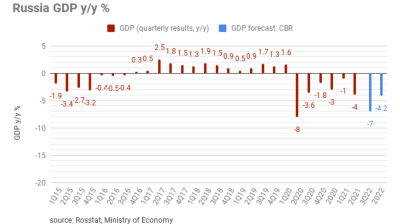 Russian Russian President Vladimir Putin gave one of the most optimistic outlooks for the economy this year, predicting the contraction would be as small as -2.5%. The Central Bank of Russia also improved its outlook by cutting 1.8% off its previous estimate, but it still will be -4.2% / bne IntelliNews
By bne IntelliNews September 9, 2022

Russian President Vladimir Putin gave the most optimistic forecast for this year’s economic performance of any government yet, saying that there will be no budget deficit and that economic contraction will be no more than 2.5% on September 7.

"State finances have stabilised, and I would like to note that this year’s budget will have a surplus of up to RUB0.5 trillion, around RUB485bn ($8bn) despite all dismal projections," he said at a plenary session of the Eastern Economic Forum (EEF) on September 7.

Russia’s economy has been doing a lot better than expected in the face of extreme Western sanctions, partly thanks to its extremely profitable oil exports.

Still, Putin’s forecasts are significantly better than those of the government. The CBR and line ministries are forecasting a contraction of 4%-5% this year. In April Russian Finance Minister Anton Siluanov predicted that the budget would end this year with a 2% of GDP deficit or about RUB2 trillion.

The CBR also has been downbeat with a gloomy monetary policy strategy released on August 12. This comes on top of a bleak leaked macroeconomic report for senior politicians. However, as bne IntelliNews reported, the leak is probably part of the posturing ahead of setting a new three-year budget later this year.

The authorities will continue efforts to defeat inflation, Putin added. "At least everything will be done for that," he noted.

Inflation in Russia is declining, by the end of the year its level may reach around 12%, Putin said.

"The short-sighted actions of the Western authorities have also triggered global inflation, it has already updated long-standing highs in developed economies. By the end of July, inflation in the United States was 8.5%. We now have it at 14%, with a trend to decline, in contrast to Western economies. I believe it will be around 12% by the end of the year," he said.

According to many experts, Putin continued, by the second quarter of next year, Russia will most likely reach the inflation target. "Some say 5-6%, and others say that 4% will be reached. Let's see, in any case, the trends are positive," he said.

Separately, Russia’s Energy Minister Nikolay Shulginov also gave a very upbeat prognosis for oil production, talking to journalists at the Forum. He said by the end of 2022, Russia is likely to slightly reduce oil production (by about 2%), oil refining will decrease by 8% to about 262mn tonnes.

"There is an increase in oil [production] now, but at the end of the year, production is likely to be slightly lower than last year – by about 2%. For oil refining, we expect a 8% decline, based on the current trend. By the end of the year it will be about 262mn tonnes," he said.

Previously the government had predicted that production could fall by up to 15% this year.

According to the Central Dispatching Department of the Fuel and Energy Complex, in 2021 Russia increased oil and condensate production by 2.2% year on year to 524mn tonnes. Processing increased by 3.9% up to 280.7mn tonnes.

According to the CBR's recent survey of macroeconomists, the Russian economy will show a 4.2% contraction in 2022 vs 6% suggested in its June survey.

The survey also indicates that annual inflation is expected at 12.9% Dec/Dec instead of 15% Dec/Dec. Expected inflationary pressure easing may force the regulator to cut the interest rate further – in 2022, its average level, according to the CBR survey, will be 10.5%, while one month ago it was estimated at c11%.

Labour market positions are also expected to remain relatively stable – the unemployment rate was downgraded to 4.9% vs 5.6%, while nominal wage growth rate was revised up to 10.4% y/y vs 10% y/y in the CBR’s June survey.

“Long-lasting recession with milder contraction in 2022. While these projections are considered as a relevant reflection of better-than-expected macroeconomic situation in 1H22, we still believe that downside risks may shift to end-2022/beginning-2023, especially amid fiscal positions’ weakening and subdued domestic consumption,” BCS GM said in a note.

Russia’s industrial output decline slows to only 0.1% in August
12 hours ago
Putin's popularity remains high, but even after a hit in September it is still at 77%
12 hours ago
Russia on track to have a record-smashing grain harvest
2 days ago
Bosnia posts annual CPI inflation of 16.8% y/y in August
2 days ago
IMF sees Romania’s economy growing by 4.8% in 2022, analysts are even more bullish
3 days ago