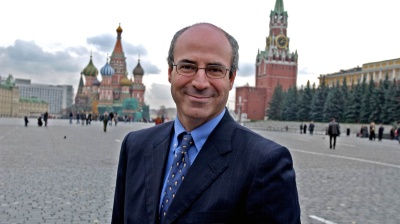 Financier Bill Browder is in Dublin this week in a bid to introduce an Irish Magnitsky Act / bne IntelliNews
By Jason Corcoran in Moscow November 28, 2018

Financier Bill Browder will land in Dublin this week in a bid to introduce an Irish Magnitsky Act targeting corrupt Russian officials due to the city’s dubious reputation as a shadow-banking hub.

Browder, 54, is scheduled to meet in Dublin with Senator Pádraig Ó Céidigh, a candidate in Ireland’s recent Presidential election, about formulating an Irish Magnitsky Act, bne IntelliNews can reveal. Ó Céidigh, a co-founder of the Irish airline Aer Arann and an independent politician, has been in discussions with Browder for months about sponsoring legislation after leading frontbenchers from the ruling Fine Gael party and the main opposition Fianna Fail party had toyed with backing a new plan.

It is understood that Ó Céidigh has drafted a bill and Browder will travel to Dublin on Friday November 30 to canvass support from other lawmakers and to talk to local media.

“Currently, Magnitsky Acts are in place in US, Canada, UK, Estonia, Lithuania Latvia and Gibraltar,” a spokeswoman for the campaign told bne IntelliNews. “We hope to work towards Ireland being the eighth country to adopt this law. Similar initiatives are currently taking place in France, Denmark, Netherlands, Sweden and Australia.”

Browder, head of investment fund Hermitage Capital Management, is spearheading a global campaign to expose corruption and punish Russian officials he blames for the 2009 death in a Moscow prison of Sergei Magnitsky, who he employed as a lawyer.

Browder, whose firm was once the biggest foreign portfolio investor in Russia with $4.5bn in assets until his expulsion from Russia, has successfully lobbied the US Congress, along with other European countries, to pass legislation freezing assets and denying visas to Russian officials allegedly involved in the Magnitsky case.

US-born Browder, who spends more time on activism these days than managing money, said he is concerned by recent research by Trinity College Dublin that 125 Russian-linked companies have raised about €110bn through the IFSC [Irish Financial Services Centre] since 2007.

“The main issue is that there are a lot of people in Ireland who are doing the Russians’ bidding and who are feeding at the trough servicing Russian money,” Browder told bne IntelliNews earlier this year. “We have the same problem in the UK where we have accountants, lawyers, estate agents, restaurateurs, jewellery sales people and others who are wholly surviving off the crumbs of Russian oligarchs’ table.”

Research by the Trinity academics shows that major Russian banks, such as MDM and Binbank (aka B&N Bank), are using Dublin's financial centre and “insider dealing schemes” to create fictitious assets and hide losses on their balance sheets.

Browder also believes Ireland is vulnerable to Russian hackers as the “soft underbelly” of US tech multinationals.

“Ireland is the soft underbelly of the tech industry because they have access to Facebook, Google and Apple without the national security overlay in America, where they are under more scrutiny by US intelligence services,” he said.

A report by the Sunday Times suggested Russian intelligence networks have increased their activity in Ireland to spy on companies involved in the technology sphere. Ireland is home to the European headquarters of Google, Facebook, Amazon, Twitter and Apple due to its low corporate tax and easy access to the EU market.

“The Putin regime has literally a thousand different projects going with an unlimited budget to disrupt democracy in the west and it wouldn’t surprise me if they are active [in Ireland],” said Browder. “They run a thousand initiatives with the expectations that 995 will fail.”

Disclosures made by Browder to the Irish Times in April this year indicate that the proceeds from the $230m tax fraud against Hermitage appear to have travelled through the bank accounts of Bank of Ireland and AIB, Ireland's two largest lenders.

Hermitage has asked the Irish authorities to investigate these transactions and money flows and to see whether the names of the Dublin companies were being used as part of a vast money-laundering scheme.

The scope of the Magnitsky act has been expanded beyond corrupt Russian officials. For example, the US last week used the Global Magnitsky Act to sanction 17 Saudi individuals involved in the murder of the Washington Post journalist Jamal Khashoggi.

Russian authorities last week announced new charges against Browder in another twist in a highly politicised case that has seen the Kremlin tirelessly go after one of its biggest critics.

Prosecutors in Moscow accused Browder of organising a “transnational criminal group” and made the scarcely credulous claim that he may have poisoned Magnitsky.

Browder, who gave up his US citizenship for UK nationality, previously said he would “come over to Ireland in a flash” if he could find enough political backing to pass a Magnitsky act.

Magnitsky was arrested in 2008 after raising the alarm over a $230mn tax fraud committed by Russian government officials. In testimony this month to the House of Commons’ digital, culture, media and sport committee, Browder said that Magnitsky had been tortured and killed “by eight riot guards with rubber batons” in 2009.

The Magnitsky Acts works on the principle that Russian fraudsters make their money at home and then spend and invest their ill-gotten gains in the West. The acts seek to deliver justice where the Russian courts have failed, through visa bans and the freezing of property, yachts and bank accounts.

Plans to introduce an Irish Magnitsky bill were scuppered in 2013 after Russia threatened to block Irish citizens from adopting Russian orphans. In a letter dated March 11, 2013, then Russian Ambassador Maxim Peshkov warned that pursuing Magnitsky legislation would “not enrich Russian-Irish bilateral relations and can have negative influence on the negotiations on the Adoption Agreement between Russia and Ireland.”

Russia had been the most popular foreign country from which Irish people adopted children with hundreds of orphans adopted there. American citizens were subsequently banned from adopted Russian orphans following the introduction of a US Magnitsky law in a controversial tit-for-tat measure.

Browder had been invited to come to Ireland in 2013 after meeting and discussing his campaign with then Senator Jim Walsh at the Parliamentary Assembly of the Organization for Security and Co-operation in Europe (OSCE).

“I came to Ireland on a mission to try to get the parliamentary committee of the Dail to introduce a Magnitsky bill and it was extraordinary how much support I had,” he said. “Ireland is very similar to the US and the UK in terms of right and wrong, good and evil and it was an easy pitch to get a parliamentary resolution calling on the government to do it.”

During his testimony to the Joint Oireachtas Committee on Foreign Affairs and Trade, Browder said two FSB agents were observed in the gallery. “When the gallery emptied of all the Amnesty International supporters, there were two people left in the gallery and they were FSB agents,” he said. “Someone caught them speaking Russian in the lobby afterwards.”

Browder returned to Dublin for a second time in 2013 to finalise details for the legislation, but the campaign floundered.

“There was a number of adoptions in process at the time and a number of parliamentarians didn’t want to go ahead and the initiative failed,” he said “It was the one and only time that Russian intimidated a country into not doing a Magnitsky Act."

Walsh said there had been cross-party support for introducing such a bill but the government, led by then Taoiseach Enda Kenny, had gotten cold feet due to fears about economic repercussions.

“It really is an important human rights matter and we should stand up and be counted,” said Walsh. “We should have a better chance succeeding now considering the appalling events that we have seen in the UK.”

“I haven’t pushed for a Magnitsky Act in Ireland since that whole debacle with our initiative and the Russians counter attack threatening banning Irish adoptions, but perhaps now is a good time to revisit it,” he said.

Browder, who didn’t know Sergei Skripal, said he isn’t taking any additional security measures since the attempted assassination of the former Russian spy.

Browder told a House of Commons committee that he believes the Kremlin “would like to arrest me, get me back to Russia and then kill me within the control of their own system.”

Browder last week helped spearhead a campaign to block Russian from taking the presidency of Interpol. The Kremlin has several times placed him on Interpol’s wanted list, exploiting a loophole that lets countries unilaterally place individuals on its database used to request an arrest.