Public mass trials to open in Tehran for 1,000 arrested amid Iran unrest 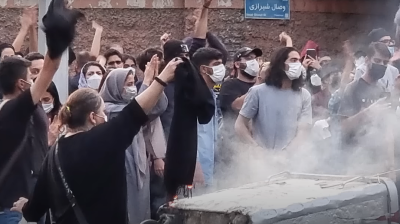 Rights groups estimate around 14,000 people may have been arrested during six and a half weeks of protests. / social media, screenshot.
By bne IntelIiNews November 1, 2022

Tehran will this week put on public mass trials, with officials having charged around 1,000 people in connection with the anti-regime protests that have swept the country for more than six weeks, according to Iran’s chief prosecutor.

Charges include "acts of sabotage", including the murdering of security guards and arson.

Rights activists have estimated that nationwide around 14,000 people have been arrested amid the unrest. Local reports suggested that as well as the Tehran trials, around another 1,000 people would face open trials outside the capital.

German Chancellor Olaf Scholz said that he was shocked by the sheer number of innocent protesters who were being illegally and violently arrested. Canada announced a fourth round of sanctions against senior Iranian officials and its law enforcement agencies. Ukraine formally asked for Iran’s football team to be expelled from the Fifa World Cup finals starting on November 20, pointing to what it claims are Russia’s use of Iranian-made drones in attacks on Ukrainian civilians and civilian infrastructure targets and Iranian human rights abuse across Iran during the unrest that would likely violate the Fifa charter. Iranian President Ebrahim Raisi said he would be contacting Qatar, the hosts of the tournament, apparently to press Iran’s case for keeping its football team, wildly popular with Iranians, in the tournament.

Also on October 31, Iran urged countries not to attend a US and Albania-organised informal security council meeting at the United Nations on the protests in Iran, according to a letter from Tehran seen by Reuters that accused Washington of politicising human rights.

As the authorities prepared for the trials, sit-ins continued in universities. Also, more than 500 Iranian journalists signed a petition demanding that reporters who helped break the story of Mahsa Amini—the 22-year-old accused of breaching Iran’s Islamic dress code, who died while in the custody of Tehran’s “morality police”, triggering the protests that started in mid-September—be released from detention. Officials have accused the journalists of being CIA agents. The latest high-profile arrest, announced on October 30, saw rapper Toomaj Salehi, one of the most prominent artists in Iran to back the protests, detained.

Unverified social media posts carried reports of a mother on October 3 as telling  how her son Mohammad Ghobadlo, a protester arrested on the charge of “corruption on earth” after attending an anti-government rally, was sentenced to death after just one hearing, with no legal representation.

“My son is only 22 years old and he is also ill. They deprived him of having a lawyer and do not allow lawyers to enter the court,” Ghobadlo’s mother said in a clip published online.

In the fierce crackdown on the protests, at least 253 people have been killed, including 34 Iranians under 18 and 35 security personnel, according to human rights observers.

As the regime internally debated how to handle the ongoing persistent protests, former foreign minister Mohammad Javad Zarif cautioned that opponents of dialogue, regardless of their guise or slogan, would appear to prefer violence.

Iran’s judiciary chief, Gholam-Hossein Mohseni Ejei, claimed that prosecutors at the trials would attempt to distinguish between angry Iranians, who merely sought to vent grievances on the streets, and those who wanted to topple the Islamic Republic. “Even among the agitators, it should be clarified as to who had the intention of confronting the system and overthrowing it,” he said.