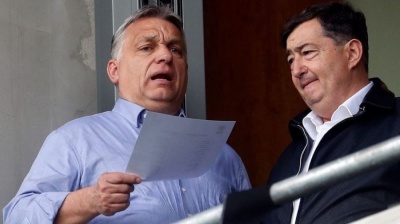 Former gas fitter Lorinc Meszaros has amassed a fortune thanks to his friendship with Viktor Orban.
By bne IntelliNews February 4, 2021

Prime Minister Viktor Orban’s friend and close ally Lorinc Meszaros is Hungary’s richest man with wealth of HUF500bn (€1.4bn), according to Forbes’ annual list of Hungary’s 50 Richest. Hungary’s billionaires’ have become ever richer under Orban and have never been as wealthy as in 2020.

The former gas fitter managed to increase his assets by HUF70bn despite a divorce and the underperformance of his flagship holding company Opus Global on the Budapest bourse.

The holding consists of 40 companies from all sectors of the economy, from asset management, insurance, agriculture, industry to construction and tourism. Meszaros used to have a huge media portfolio, but he transferred it to the Central European Press and Media Foundation (KESMA) controlled by Orban allies.

The former mayor of Orban’s home village, Meszaros has been portrayed as the proxy to the prime minister. Orban himself claims to have zero savings, according to his latest asset declaration.

Meszaros' rise to the business elite began after Lajos Simicska, the former cashier of Fidesz fell out of favour with the prime minister in early 2015. After the break-up, Simicska’s companies were excluded from state tenders and Hungary’s most powerful oligarch was forced to sell his companies after the 2018 elections. His media companies were gobbled up by Meszaros.

The sale of Hungary’s second-largest power plant also boosted his wealth. State-owned utility giant MVM paid HUF17.4bn for his 76% stake in Hungary’s second-largest power plant last year. The state had injected an additional HUF57bn for the loss-making coal-fired plant later, but that was only revealed after a data request by opposition politicians.

When Meszaros acquired the company in the spring of 2018 he tapped HUF11bn of dividends set aside by former owner Germany's RWE and EnBW.

The former gas fitter’s wealth has shown an exponential rise from HUF8bn in 2015. He broke the HUF100bn mark in 2017.

While other companies are struggling to stay afloat, the pandemic has had little impact on Orban’s cronies. They have also benefited from state lifelines. Hunguest Hotels, owned by Meszaros was the recipient of a HUF17bn state grant during the first wave.

This did not prevent Hungary’s richest man from laying off hundreds of people.  In comparison, the government is dishing out some HUF27bn for more than 14,000 companies to save 100,000 jobs in tourism and catering.

Meszaros has also been involved in the largest deal ever in the financial sphere. The tie-up between MKB-Takarekbank-Budapest Bank would create the country’s largest lender after OTP. Meszaros has a 48.6% stake in MKB, which controls a 30.35% stake in the joint bank holding company in charge of the merger process.

Sandor Csanyi, chairman-CEO of OTP Bank, kept his spot as the second richest. His worth is estimated at HUF393bn. In addition to the OTP Group, Csanyi’s portfolio also includes significant agricultural interests.

Hungary’s largest real estate investor Tibor Veres, the owner of Wing and Wallis, comes third on the list, with an estimated wealth of HUF259bn.

Forbes’ Hungary’s 50 Richest has only 49 names. Owners of Hell Energy, ranked 26th last year won a lawsuit against the magazine after it included their names a year ago. Forbes Hungary was instructed by the court not to publish the company’s name in this year’s list.