Private jets linked to the business empire of current Ukrainian President Petro Poroshenko and his partners Igor Kononenko and Oleh Gladkovsky helped evacuate the Donetsk elite allied to exiled president Viktor Yanukovych from Kyiv, following a massacre of opposition protestors on February 20, 2014, according to a bne IntelliNews investigation.

While Ukraine froze in horror in the hours after the Maidan violence on February 20 last year that left up to 50 dead in murky circumstances, one business sprung into action: Ukraine's market for VIP flights. A horde of cronies of Yanukovych followed their leader's flight from Kyiv to their stronghold in Donetsk or to their luxury retreats abroad, ironically with many of them leaving Kyiv on private jets operated by the Ukrprominvest empire, which was founded by Yanukovych's successor, President Poroshenko, together with his partners Kononenko and Gladkovsky.

The three men have filled the power vacuum left in Kyiv by the exile of the Donetsk clique: alongside Poroshenko as president, Kononenko became boss of the Bloc Petro Poroshenko parliamentary group, the largest political force, while Gladovsky is now first deputy secretary of the National Security and Defence Council, with oversight over the sprawling defence industry.

The Ukrprominvest VIP aviation division was known as Business Airlines, and was run out of the Ukrprominvest headquarters in Kyiv's riverside Podil distict, along with the better known automotive division Bogdan Corporation and shipyard Leninska Kuznya. Business Airlines also banked with the Poroshenko-owned International Investment Bank (MIB), according to internal documents.

As bne IntelliNews has shown, top Yanukovych cronies were frequent fliers on the Ukrprominvest planes between 2010 and 2014, including hardliners such as Andriy Kluyev and Nestor Shufrich, secretary and deputy secretary respectively of the National Defence and Security Council, first deputy prime minister Serhiy Arbuzov, and members of the family of former prime minister Mykola Azarov, who all paid vast sums in cash for the secretive luxury flights.

The Business Airlines website has since been taken down, but remains available in archive form along with a 2014 company presentation. Crosschecking the 2014 airfleet with flight data for the immediate aftermath of the Maidan massacre of February 20, 2014 reveals that the jets flew numerous flights out of Kyiv to Donetsk on February 20-24, as well as further afield to Europe and Russia.

Although there is no personalised data available showing who flew when and where between February 20 and February 24, the pattern of flights of the Ukrprominvest planes certainly suggests a mass exodus from Kyiv of Yanukovych's wealthy allies, fearful of retribution after the massacre that left up to 50 opposition protestors and police dead.

Yanukovych himself fled his residence near Kyiv on the night of February 21, after a truce with the opposition failed to hold. He flew by helicopter to Kharkiv in East Ukraine, before travelling by road via Donetsk to Crimea, from where he left by ship to Russia.

At the time, however, Yanukovych was widely reported to have flown out of the country to Dubai on what was supposed to be his private Airbus 318 with registration number OE-ICE, which flew to Dubai from Kyiv at 9:55pm on February 21 – immediately after opposition protestors on the Maidan rejected a EU-negotiated peace deal.

While the information was erroneous, the plane proves to be linked to Yanukovych's successor as president, as part of the Business Airlines fleet, according to the 2014 company presentation. It is not clear who were the actual passengers.

The conspicuous OE-ICE flight was just one of a score out of Kyiv on February 20-24 that were flown by the Business Airlines fleet – as identified from the company website, as well as from internal documents relating to the operation's offshore vehicle, Intraco Management, that were leaked to the Ukrainian press.

The busiest of the luxury jets was Cessna Citation jet TC-LLL, pictured here among the Business Airlines fleet.

According to international flight data seen by bne IntelliNews, TC-LLL flew to Donetsk from Kyiv's Zhuliany airport at 11:30am on February 20 – about two hours after the gunfire on the Maidan peaked, and as the scale of the violence became clear. The plane returned immediately to Kyiv, before flying to Sochi at 6:30pm. Sochi was at the time the scene of Russia's showcase Winter Olympics, and the temporary seat of Russian President Vladimir Putin and his Kremlin elite, who had backed Yanukovych and his corrupt regime.

TC-LLL was back in Kyiv from Sochi on the night of February 20, before flying again to Donetsk at 10:25am on February 21, as frantic talks were taking place in Kyiv to reach a peace deal between the embattled Yanukovych regime and the opposition. TC-LLL then returned to Kyiv and flew again to Donetsk from Kyiv's Borispol airport at 4:15pm on the same day.

UR-DAV, a Dornier 328-300 jet listed in internal documents for Business Airlines/Intraco Management, flew from Kyiv's Borispol airport twice to Donetsk on February 20, at midday and at 4:40pm, and a third time on February 21, before flying to Moscow's Domodedovo airport from Donetsk at 4:40pm on February 22.

UR-DWL, a Cessna Citation jet, flew from Kyiv to Donetsk at 6:45pm on February 20, and then on to Kharkiv, before flying from Kyiv Borispol to capital of Ukraine's Crimea peninsula, Simferopol, on February 21.

Many Business Airlines-linked jets besides OE-ICE took their clients to retreats in Western Europe or Russia during the dying days of the Yanukovych regime.

Cessna OE-GBY, pictured here in the Business Airlines fleet, flew out of Kyiv to Barcelona in the morning of February 20, and was back in the evening to fly to Egypt's Sharm-el-Sheik, then to Catalonia's Girona on February 21, to Vienna and Nice on February 22, and to Barcelona again on February 24.

TC-DAK, pictured here in the Business Airlines fleet, then flew to Nice on February 21, to St Moritz on February 22 and to Moscow's Domodevo airport on February 23.

According to Valentyn Nalyvaichenko, former head of Ukraine's security service SBU, it is Ihor Kononenko, deputy head of Bloc Petro Poroshenko, who directly supervises the Business Airlines/Intraco private jet business. Kononenko, though, has denied any connection to the business. “I am not a beneficial owner or director of the companies mentioned in your query,” he has told bne IntelliNews.

Kononenko said that the leak of incriminating documents to the press was linked to the ongoing local election campaign. “Unfortunately, made-to-order scenes on TV, articles in newspapers and magazines, but most of all on Facebook, have become commonplace in our society,” he said. 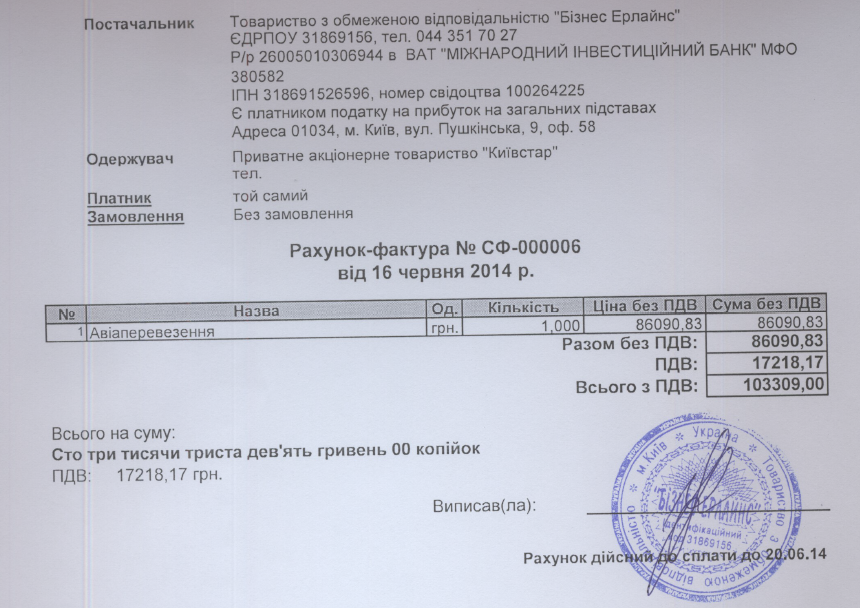