Populist candidate leads in polls ahead of Slovenian presidential election 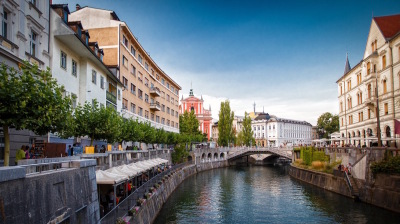 LJUBLJANA: In the second round, Anze Logar is likely to face lawyer Natasa Pirc Musar, supported by 19.8% of those polled, or Milan Brglez (18.6%). / bne IntelliNews
By Valentina Dimitrievska October 20, 2022

Seven candidates are standing in the first round of the Slovenian presidential elections on October 23, with opinion polls indicating that Anze Logar,  backed by former populist premier Janez Jansa's Slovenian Democratic Party, will have a strong lead going into the likely run-off on November 13.

Incumbent President Borut Pahor is ineligible to run for a third mandate for the presidency, which has largely formal powers.

Logar, a 46-year old economist, is supported by 31.7% of those surveyed in the latest poll. Logar was minister in the third government of Jansa from 2020 until 2022. Logar filed his candidacy in September with the support of 13,000 voter signatures, above the threshold of the needed 5,000, which makes him an independent candidate, even though he is supported by Jansa’s SDS.

The latest Ninamedia poll showed that the election could go to a second round, in which Logar could face lawyer Natasa Pirc Musar, supported by 19.8% of those polled, or Milan Brglez (18.6%).

Logar’s slogan in the election campaign is Sodeleujemo #ZAprihodnost (Working together #FORtheFuture ). His electoral programme advocates the creation of a stimulating economic environment, inclusion of young people, green transformation and the issue of security and foreign policy. In order to achieve this Logar believes that cooperation of all political parties is needed, according to the portraits of candidates published by broadcaster RTV Slovenia.

“Even if we have different opinions, we definitely have something that connects us, and in thus we must combine these positive areas and step confidently into tomorrow, in which Slovenia will breathe with full lungs and use all attributes at his disposal,” Logar said.

Natasa Pirc Musar, a 54-year old lawyer, entered the presidential race because she believes that her experience, knowledge and activities in public life, will serve the state's interests. She said she will not be silent about irregularities in the society.

Pirc Musar highlighted the topics of human rights, fight against the poverty, giving opportunities to young people and respecting the elderly for their work in the past.

55-year old Milan Brglez is a political scientist and former speaker of the parliament. He has been serving as a MEP since 2019. He is running as a candidate of the Slovenian Democrats (SD) party led by Foreign Minister Tanja Fajon, but is also supported by the Freedom Movement, the biggest party in the parliament, led by PM Robert Golob.

“The joint candidate means that I am not subordinate to anyone, but I am working for this country to get a president it deserves,” he said.

“We need integration and respect, these are two key issues that we must internalise in these difficult times," Brglez said when announcing his candidacy for president.

The Freedom Movement decided in April not to put forward a candidate for the presidential election in October, after its candidate for president Marta Kos withdrew her candidacy. The ruling party is expected to focus on the local elections due on November 22.

Nearly 1.7mn voters are eligible to cast a vote, of which 107,107 have permanent residence abroad.