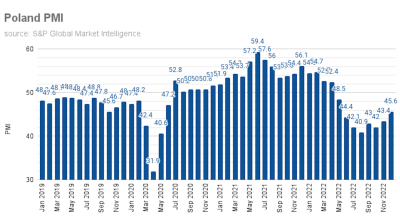 Output and new orders drove the December fall, while employment and purchasing continued to be cut, S&P Global said in an analysis. “However, rates of decline were generally softer than those seen in November, and there was some positive news on the inflation front as costs rose to a noticeably weaker degree,” the index’s compiler added.

Facing further downturns in demand and production, alongside generally uncertain and unpredictable market conditions, companies continued to optimise their resources, even making further reductions to both their purchasing activities and employment, S&P said.

There were some positives, however, S&P’s Economics Director Paul Smith said in a comment.

“Rates of contraction have generally eased, and whilst a long way to go still, the sector is slowly making its way back towards stability,” Smith said.

“Moreover, inflation rates are heading downwards, with costs rising at their slowest rate for 29 months, adding further to hopes that the worst of the downturn is behind us,” Smith added.

Real data from Poland’s industrial sector appears to be following PMI surveys to an extent. November output slowed 2pp to 4.6% y/y in November – still clearly above the consensus line of 2%.

According to PKO BP, Poland’s industrial sector may be approaching the rebound point while the still subdued activity supports the easing of inflation.

December industrial production data from GUS are due on January 23.