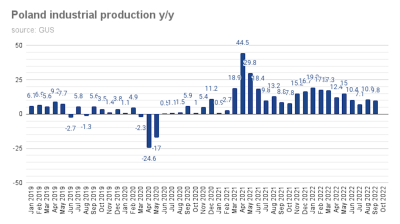 The expansion came in above the consensus line and offered a positive surprise amidst worries of a looming economic slowdown due to the central bank’s fight with inflation and the ongoing energy crisis.

“The data show that Poland’s industrial sector remains resilient to external shocks – so far,” PKO BP said in a comment.

Seasonally adjusted, output growth came in at 10.3% y/y in September following a gain of 11.2% y/y the preceding month.

In unadjusted monthly terms, industrial production grew 9.8% after growing 0.7% m/m in May, GUS also said. Adjusted month-on-month expansion came in at 0.3%, easing from a gain of 0.7% m/m in August.

Broken down by the main segments and in unadjusted terms, production grew 11% y/y in September in manufacturing, a slight ease from August’s expansion of +11.2% y/y.

Output in the utility sector slid 3.7% y/y in September after a revised expansion of 5% y/y the preceding month.

In water supply and waste management, there was a growth of 2.8% y/y in the ninth month, which followed a gain of 8.2% y/y in August.

Industrial production data do not change much in the outlook for Poland’s monetary policy, with the National Bank of Poland now walking a tightrope between measures to quell inflation and the imperative to avoid a sharp decline in economic growth and employment.

Poland's GDP expansion halved to 4.7% y/y in Q2 while falling 2.3% in q/q terms. Third quarter flash GDP data are due in mid-November.