Poland to build barrier along its border with Russia's Kaliningrad region 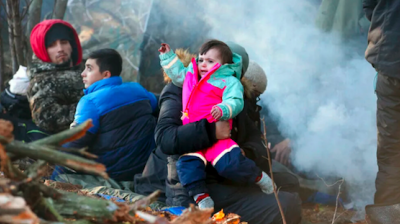 Poland will consider erecting a barrier along its border with Russia’s Kaliningrad region similar to the one currently being completed along the border with Belarus, a government official told local media on October 25.

Poland is concerned about Russia reportedly opening the Kaliningrad region – a Russian exclave tucked between EU members Poland and Lithuania, and the Baltic Sea – to flights from the Middle East and Asia.

Russian media reported in early October that the move is to attract tourism to the region. The offer is targeting Turkish carriers, which can fly across the EU airspace freely. Because of sanctions, Russian and Belarusian ones have to fly over the Baltic Sea to get to the Kaliningrad region.

Warsaw fears that tourism is just smokescreen for Moscow planning to launch a new stage of “hybrid war” by flying in migrants to push them towards the Polish border in a destabilisation bid. After Russia attacked Ukraine in February, Poland has become the West's key outpost for sending humanitarian and military help to Kyiv.

“We are ready for [migrants arriving from the Kaliningrad region] and we have shown that the attack from Belarus did not bring any results, at least not ones expected by [Russia President Vladimir] Putin and [Belarusian President Alexander] Lukashenko,” Krzysztof Sobolewski, secretary-general of Poland’s ruling Law and Justice (PiS) party, told the state Polish Radio.

“We will have to … build similar border fortifications that are currently in the Polish-Belarusian section [of the border] and do everything to make this hybrid war not work out,” Sobolewski also said.

Poland has nearly completed a physical barrier with electronic surveillance along its border with Belarus, which Poland says teamed up with Russia in the second half of 2021 to orchestrate a migration wave from the Middle East, Asia, and Africa, stoking tensions and clashes.

Many migrants died along the border after wandering too long in difficult terrain in low temperatures late in 2021. That led to Poland being accused by human rights organisations of pushing migrants back to Belarus without reviewing their situation.

Kremlin spokesman Dmitry Peskov said that Russia would not interfere were Poland to carry out its plans, Reuters reported.

"History proves the stupidity of decisions to build walls every time, because over the years or decades, all walls fall," Peskov said.