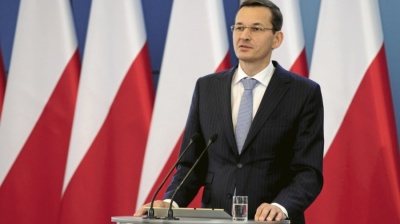 Facing a mutiny from United Poland, Prime Minister Mateusz Morawiecki has appealed to the opposition for help. / bne IntelliNews
By Wojciech Kosc in Warsaw December 15, 2022

Poland’s ruling Law and Justice (PiS) party needs the opposition’s support to pass new legislation that it hopes will convince Brussels to unlock tens of billions of euros from the EU’s pandemic recovery fund.

On December 13, PiS tabled a new legislative proposal changing how disciplinary matters concerning court judges are handled. The disciplinary regime for judges is at the heart of a long-running dispute between Poland and the European Commission, which says the regime undermines judges’ independence and impartiality, facilitating political control over judges and, by extension, the judiciary as a whole.

PiS expects that the proposal – if passed by the parliament during  December  - will convince the Commission that Poland has seriously reconsidered the EU executive’s concerns over judicial independence and effectively walked back measures that compromise it.

That is seen as the Polish government’s retreat over an issue that it has long said was non-negotiable because it touched the very foundation of the balance of power between EU member states and the bloc’s institutions.

PiS and its junior partner in the coalition, the small rightwing United Poland party, have spent years trying to convince the Polish and European public that the Commission is usurping new powers over member states by dictating to them what is – or is not – possible in reforming the national court system.

But as PiS is about to face arguably the toughest year of its administration in 2023 – with an economic crisis, a protracting war next door in Ukraine, and a general election – the party’s outlook has changed.

PiS now needs to secure billions from the pandemic recovery so that the impact of the unfolding economic crisis is lessened by public investment that the funds will make possible.

PiS will need the support of the opposition to pass the proposal since United Poland said that it would not support it. “Passing it would lead to anarchy in the judiciary,” Deputy Justice Minister Sebastian Kaleta told reporters in the parliament on December 14.

Still, United Poland asked for a “few days” to consider its position in a hint that a compromise is possible so as to avoid a coalition crisis.

The main provision of the proposal is to move disciplinary matters concerning judges from the Supreme Court to the Administrative Supreme Court, a separate entity.

The new legislation also proposes that judges formally motioning to test the independence of other judges would not face disciplinary procedures, which is a sanction contained in the current disciplinary regime and one of the provisions seen as a tool to subjugate judges opposing the reforms.

Facing a mutiny from United Poland, Prime Minister Mateusz Morawiecki appealed to the opposition for help.

Morawiecki said that it was “more important” now to make sure that the recovery fund money will go to public investments like roads or energy so that there is “budget money for defence”.

“I hope that the great majority of the political class will arrive at the same conclusion,” Morawiecki said.

But the opposition appears not to buy the viewpoint of the government, which it says is responsible for all the problems with the recovery fund in the first place.

“We are going to work on the proposal but our support will depend on its final shape,” leaders of the opposition said on December 14.

The parliament is expected to begin debating the proposal on December 15. Work is then expected to continue next week.