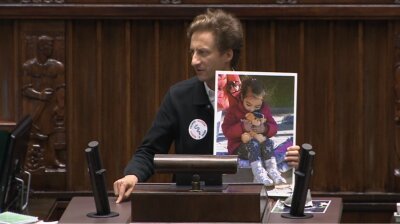 Franciszek Serczewski, a member of the Civic Coalition (which includes the Civic Platform party) speaks in the migration debate in the Sejm.
By Wojciech Kosc in Warsaw October 1, 2021

The Polish parliament voted late on September 30 to extend the state of emergency along the border with Belarus until the end of November.

Poland has been dealing with a steep spike in the number of people trying to cross from Belarus. In September alone, Poland’s Border Guard recorded some 6,000 attempts to cross the border, 60 times the figure from the entire 2020.

Poland says the influx of migrants, who are chiefly from the Middle East and South Asia, is a premeditated action by Belarusian President Alexander Lukashenka to sow chaos on the eastern flank of the EU. Lithuania and Latvia have also been trying to stem the inflow of migrants.

The parliament okayed a motion from President Andrzej Duda 237 to 179 with 31 abstentions. A state of emergency can only be extended once by no more than 60 days.

Poland’s government claims that the state of emergency is necessary to contain the inflow of migrants, who could pose a danger to the Polish state and its citizens.

“In one of the phones [intercepted from migrants], [we] found the number to a person arrested in one of the EU countries on August 22. According to our allies' databases, that person was involved in preparing a terrorist attack in the EU and is a fighter for the Islamic state,” Home Affairs Minister Mariusz Kaminski told the parliament.

Earlier this week, Kaminski led a press conference, which attempted to depict migrants as dangerous by showing pictures – allegedly found on migrants’ phones – of a man having an intercourse with a horse and another man groping seemingly underage girls. Other pictures were also shown to suggest migrants’ ties to the Islamic State or the Taliban.

The government’s allegations have proved difficult to confirm, as the media and NGOs are banned from the border area on the grounds of the state of emergency regulations.

Opposition parties, some media, and NGOs claim that Poland is violating international law by not allowing migrants to file for protection once intercepted on Polish territory. The Polish Border Guard, aided by the military, is also accused of pushing the migrants back to Belarus, where they are stuck right at the border, as the Belarusian servicemen do not allow them to go back any further. The opposition and NGOs have been

— Franek Sterczewski (@f_sterczewski) September 30, 2021  that there are children among the migrants pushed back to Belarus.

The temperature in the area has dropped to below 10°C at night. At least five migrants have died in the border area due to exposure and it has been unclear how Poland had handled them after they crossed from Belarus. The government claims that it helps all who require medical care.

Poland is refusing help from the EU’s border protection agency Frontex, based in Poland, which could shed more light on the situation.

“Poland has been actively cooperating with Frontex since the beginning of the crisis and is in constant contact with its leadership,” Kaminski said on Twitter after meeting Ylva Johansson, the European Commissioner responsible for home affairs, in Warsaw on September 30.

Poland has called the influx a “hybrid war” waged by Belarusian President Lukashenka in response to EU’s sanctions against his regime following the rigged presidential election last year.