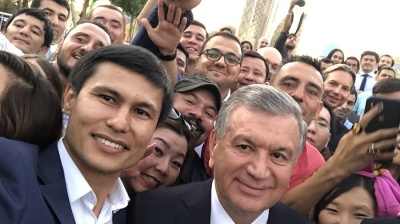 bne intellinews’ annual Outlook series of reports looks ahead to what 2023 holds for the countries in our news regions. Below is an introduction. Read the full report on Uzbekistan here (Flipbuilder) or in PDF (see links at foot of this article).

The past year has seen Uzbekistan, in common with the rest of Central Asia, braced for economic impacts of the Russian invasion of Ukraine and the Western sanctions imposed on the Russian economy as a result of the Kremlin’s choice to wage war.

The effects have yet to register on anything like a critical scale in the region, while there have been some positive outcomes such as a rather cornered Moscow’s increased readiness to compromise in the pursuit of badly needed trade and investment deals, but some conclusions on economic damage can already be drawn and there is the worry that, combined with the global economic downturn, 2023 could bring some serious setbacks. The latest IMF Outlook found that the poverty level across the countries of Central Asia and the South Caucasus looked set to worsen by around 1%.

At the beginning of 2022, experts were quick to predict a sharp decline in Central Asia, given how its economies are substantially interlinked with the Russian economy. That has not really come to pass with, for instance, remittances from the region holding up as Russia fought to defend its economy. Yet there are renewed fears that as some of the more medium-term effects of the war sanctions and international downturn start to eat into the Russian economy, there could be a more pronounced fall-off in jobs and earnings available in Russia to Uzbek and other migrants, causing a significant reduction in remittances sent home. That’s causing anxieties. In Uzbekistan’s case, for instance, migrants generate some 6% of GDP.

The Uzbek central bank has compiled both basic and alternative economic scenarios the country might face in the years ahead. Whereas the pandemic was the dominant irregular factor for a couple of years, geopolitical shocks have now come to the fore.

In its basic forecast, the central bank foresees a scenario in which global economic growth continues, albeit at a slower pace of around 3%. Also in this outlook, the exchange rates of the main partner currencies to the Uzbek som (with the exception of the ruble) would remain relatively stable, while the oil price would hover at around $80-90 per barrel. Remittances would decrease slightly in 2023, but would then increase.

Foreign investment in Uzbekistan would continue to grow, facilitated by the further opening up of the capital market to foreign investors and IPOs/SPOs. A gradual transition to market prices for energy and structural reforms applied to various industries would be expected.

The situation would allow for a resumption of fiscal consolidation and a reduction of the budget deficit by a percentage point or so.

In the central bank's alternative scenario, continued uncertainty would beset the energy market, the conflict between Russia and Ukraine would escalate – as would the sanctions regime applied to Moscow – and investors would likely become more cautious. They might be given more pause for thought by a further tightening of monetary policy around the world.

Global economic growth would slow to 1.5%, while oil and raw material prices would fall sharply due to the risk of recession. This would weaken the main partner currencies to the som and squeeze remittance inflows. On a brighter note, food prices might fall.

To support the economy, the fiscal stimulus would continue through 2023, meaning the budget deficit would remain at the current 4-4.5% of GDP. Starting from 2024, against a background of fiscal consolidation, it would decrease to 3.5−4% of GDP.

The liberalisation of regulated prices would have to be postponed. That would make it possible to reduce inflation to 7-8% in 2023. Subsequently, inflation would decline at a slower pace – to 6-7% in 2024 and the targeted 5% in 2025.

In either scenario, the regulator would stick with a moderately tight monetary policy.