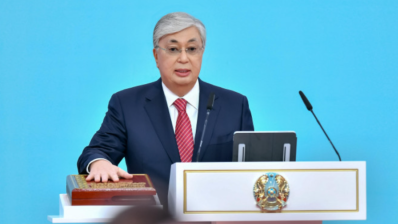 Re-elected Tokayev faces the challenge of steering a multi-vector foreign policy that does not upset the Kremlin and delivering enough genuine reform to persuade Kazakhs that real change is at hand. / akorda.kz
By Nizom Khodjayev in Astana January 9, 2023

bne intellinews’ annual Outlook series of reports looks ahead to what 2023 holds for the countries in our news regions. Below is an introduction. Read the full report on Kazakhstan here (Flipbuilder) or in PDF (see links at the foot of this article).

Kazakhstan has just endured one of its most jarring and challenging years since independence was gained in 1991.

The year got under way with “Bloody January”. Major countrywide civil unrest turned into a coup attempt. The president, Kassym-Jomart Tokayev, warned violent protesters he was applying a ‘shoot-to-kill’ crackdown. Russian troops were even invited in as part of a Collective Security Treaty Organisation (CSTO) response approved by Tokayev to underline that he was deadly serious about staying in power.

From late February, when Russia invaded Ukraine, the economic impacts of the ensuing war, including those related to the Western sanctions response against Moscow, were unavoidable for Kazakhstan. Its economy is heavily intertwined with that of Russia.

By the end of the year, political power in Kazakhstan was fully reconsolidated under its second president since independence, Tokayev. But wary of showing too much outward closeness to traditional strategic partner Russia, turned into an international pariah by its actions towards Ukraine, Astana found itself juggling foreign relations between Russia, the West and China more than ever.

Tokayev trod a fine line. He stayed on good terms with the West by voicing respect for the war sanctions imposed on Russia and at the same time he shrewdly worked to ensure Kazakhstan remained an ally of Russia by staying within the limits of the Kremlin’s tolerance. With Russia rather overstretched by its difficulties with Ukraine, that proved possible despite Tokayev publicly declining to recognise the so-called independence declared by the Russia-occupied Donbas and Luhansk territories snatched from Kyiv.

Simultaneously, fully aware that the new mood in Kazakhstan meant it was wise to increasingly sideline predecessor and former mentor Nursultan Nazarbayev, Tokayev made sure to do so.

On the economic side, nothing highlights Kazakhstan's dependence on Russia more than the reliance on the Caspian Pipeline Consortium (CPC). It provides the export route for around 80% of Kazakh oil flows to the West. The route’s vital infrastructure is a pipeline that passes through Russia to the Russian Black Sea port oil terminal in Novorossiysk. S&P Global Ratings has lowered its outlook on Kazakhstan to negative from stable, given concerns over how dependent the country’s oil industry is on the CPC export provision.

Since the Kremlin invaded Ukraine, Kazakhstan has several times experienced CPC restrictions beyond its control on oil exports from Novorossiysk. The S&P downgrade was triggered as analysts digested just how vulnerable the CPC pipeline remains to disruption. Each time CPC announces that technical, or other difficulties, are hindering Kazakh oil flows through its pipeline, sceptics wonder whether the real story relates to a political decision taken by Vladimir Putin’s Russia.

On top of the anxieties and infrastructure vulnerabilities plaguing Kazakhstan’s oil sector, the country’s economy more generally is now highly exposed to supply chain disruptions. The hindering of trade that runs through Russia is a distinct factor in the major surge in inflation experienced by Kazakhstan in the past year. The inflation woes added to existing economic anxieties of Kazakh citizens who were dissatisfied with their lot even prior to the setbacks caused by the COVID-19 pandemic.

In the year 2023, assuming that there are no new ‘black Swan’ surprises, Kazakhstan will face more of much of what’s been outlined above. It’s likely that the coming year will see a continued surge in inflation, further worries centred on the exodus into Kazakhstan of Russians fleeing the war mobilisation and, at the same time, the high expectations of many – or extremely low expectations, depending on whom you ask. Tokayev has pledged to alleviate chronic poverty and dismantle Nazarbayev’s oppressive legacy. Kazakhs will want to see good evidence of near-term progress.

On the positive side of things, Kazakhstan is enjoying a great expansion in the transit of goods dispatched from China to Europe and vice versa. Its territory plays a key role in the Trans-Caspian International Trade Route (TITR), also known as the “Middle Corridor”. Use of the route has kicked into full gear as traders shy away from sending consignments via sanctions-embroiled Russia.