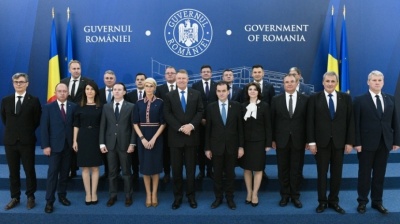 Romania underwent major political turmoil during the second half of 2019, which eventually diminished with the formation of a new government led by the National Liberal Party (PNL) on November 5 and the victory of the new government’s political sponsor, President Klaus Iohannis, in the presidential elections on November 24.

This should provide certain stability ahead of the local (June 7) and general elections in the autumn of 2020 — if they are not held early — but the government’s capacity to pursue major economic reforms remains limited given the electoral context.

The PNL-led government under Prime Minister Ludovic Orban is backed by several formerly opposition parties and individual MPs, which came together to oust the latest Social Democratic Party (PSD) led government led by Viorica Dancila. However, there are already numerous sources of conflict among the parties that backed the government which are likely to intensify as term general elections approach in 2020. With the PSD still a major political force with great potential to put the new government under pressure, early elections cannot be ruled out.

Iohannis commented on the question of early election at the beginning of January. "I believe that they [the elections] are possible and I will get involved to promote the concept of early elections. Yes, I want early elections,” Iohannis said in a speech broadcast by B1 TV. Orban said earlier in the week that he would try to reach a pact on early elections with political parties represented in the parliament.

Meanwhile, the new government has already made moves to roll back some of the most investor-unfriendly policies of the last few PSD-led governments, but its scope for action in the months before the next elections is limited.

The government’s possible attempts to achieve fiscal consolidation by means other than unpopular or electorally-sensitive “austerity” steps (cutting wages, curtailing public employment) namely by thorough reconsideration of the entire taxation system toward higher property and profit/dividend taxation already received an early warning from rating agency S&P that put the country on the rating watch negative list in December.

Independent analysts put Romania’s GDP growth for 2020 around 3%. This marks a steep slowdown from the record 7.1% GDP growth in 2017.

In a note on Romania, Raiffeisen analysts cite the below-expectations growth in 2019, and forecast: “Our expectations are for a further deceleration of the GDP advance in 2020 to 3%, a level close to potential growth. Domestic demand is expected to remain the main GDP driver. Still, we look for a more visible deceleration of the GDP advance in 2021, as the much-needed fiscal consolidation would likely be delayed after the 2020 elections.”

The latest GDP growth data released by the statistics office, INS, in December showed that Romania’s economic growth eased to 3.0% in 3Q19, from 4.6% in the first half of the year.

Agriculture and industry made a combined negative contribution of 1.2 percentage points to the GDP growth in the third quarter — compared to -0.1pp in Q2 when the overall GDP growth was 4.4% y/y. The two sectors were thus almost entirely responsible for the slowdown seen in Q3 compared to Q2. However, negative performances in other sectors point to a broader slowdown likely to continue during the coming quarters. On the upside, gross fixed capital formation soared in Q3 at the expense of a slower advance of consumption.

Also in December, the INS reported that Romania’s industrial production index contracted by 4.5% y/y in October and accumulated an average decline of 1.9% in the first ten months of 2019 compared to the same period of 2018. This was the steepest decline since the 2009 recession.

Retail sales continued to grow strongly in the second half of 2019. However, the real 6.8% y/y increase in October marked a slight decline from the average 7.4% y/y growth rate posted in Q3 and 7.8% y/y in January-September.

The wide but arguably under control external deficit of close to 5% of GDP per annum is a constant threat to the stability of the exchange rate and prices, but the central bank does not encourage an exchange rate correction — while banks still have enough forex loans on their balance sheets to abstain from encouraging such a move.

The current account deficit (CAD) remains under pressure from weakening external demand and strong import growth underpinned largely by expansionary fiscal policies. On a 12-month rolling basis the CAD has been close to 5% of GDP since May, driven by increasing trade deficit (up 23% y/y in January August).

Rating agency Fitch expects the deficit to remain around 5% of GDP during the forecast period (compared with the current BBB median of 1%), assuming no sharp fiscal deterioration and a gradual recovery in external demand by 2021.

Beside the local and general elections, fiscal policy remains a hot topic and a source of risks through 2020 after the expected 4.4%-of-GDP budget deficit in 2019.

The government’s budget for 2020 is subject to multiple risks. It envisages a 3.5%-of-GDP deficit but the shaping of the fiscal policy is only at the beginning. The main causes of the fiscal deficit are the pension hikes (15% in September 2019, followed by 40% planned in September 2020) on top of the public payroll hikes over the last few years. The new government promised to observe the 40% hike in September 2020, while the corrective measures are still unconvincing, though they are likely to be enhanced.

The budget was adopted at the end of December 2019 without a debate in parliament as the government chose to use the so-called responsibility procedure. The budget law was promulgated by Iohannis in January.

Rating agency S&P said when revising downward Romania’s outlook to negative that it believes “there are grounds to question the realism of the revised budgetary targets over the 2020-2022 period.” And indeed, S&P projects a 4% of GDP deficit target for 2020, versus the official target of 3.5%. On the upside, public debt is not expected to exceed 40% of GDP over the forecast period, according to the rating agency’s forecast.

While maintaining its rating and stable outlook on Romania’s sovereign in early November, fellow rating agency Fitch said it expects public debt levels to rise to 38% of GDP in 2021 (from 35% in 2018), still below the current BBB median of 40%.

Finance Minister Florin Citu told Bloomberg in December that Romania will tap international markets “in the first part of next year [2020],” since its financing needs are safely covered by the internal market where there is a strong demand for state bonds at this moment.

Citu added that Romania has an “optimum size buffer” to face any funding or exchange-rate pressure and announced yet unspecified measures to bring the budget deficit down to around 3% of GDP.

bne IntelliNews columnist Alex Tanase pointed out in November that while Romania is not yet a highly indebted nation by international standards, the country’s debt has been rising steadily. “During the last three years alone total foreign debt increased by €16bn from €92.9bn as of end-2016 and most of it was for consumption, not investment,” Tanase said in a comment for bne IntelliNews. “The issue of Romania’s foreign debt has been disregarded by almost all governments in power since 1990,” he added.

In the private sector, in December Romania’s BCR, which is part of Austrian Erste Bank group, successfully placed the first senior non-preferred bonds in Romania and the Central and Eastern Europe (CEE) region on the Bucharest Stock Exchange (BVB).

Romania’s banking system is highly capitalised, the non-performing loans (NPLs) have decreased close to pre-crisis levels and on an aggregate basis it boasts record profits despite the so-called “greed tax” that has already sweetened before most likely being abolished by the new government.

The aggregated net profits of Romanian banks reached RON2.23bn (€470mn) in the third quarter of 2019, and despite the slim 3.4% y/y advance this marked the second-best result in the post-crisis period.

Furthermore, the NPL ratio dropped to the lowest level since it started being assessed in 2014 (4.6% under EBA methodology). Higher quarterly profits were posted only in the last quarter of 2015 (€498mn) while the profits reported in the third quarter of 2018 were also outstanding: €461mn.

The banking system’s assets increased by 6.4% y/y at the end of September, which is a modest performance given the nominal GDP annual advance that is now close to double digits, to RON473bn, less than 50% of the year’s GDP. The return on assets ratio (ROA) calculated for whole January-September period was 1.45%, compared to 1.76% in the same period of 2018. The return on equity (ROE) in January-September also edged down from 16.4% in the first three quarters of 2018 to 13.2% in the same period of 2019.

The weaker profitability in the 2019 YTD period was due to the provisions built in the second quarter by two savings-mortgage banks that are required to pay back state grants collected in the past.

Despite the positive trends in the sector, smaller banks are under pressure as they cannot achieve the same levels of productivity as large ones.