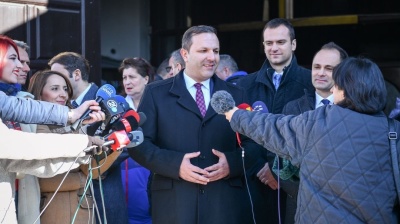 North Macedonia is heading for snap general elections in April 2020 after EU leaders failed to agree during their summit in October 2019 to set a date for Skopje (and also Tirana) to start EU accession talks, despite previous promises. The rejection came primarily from French President Emmanuel Macron who insists on internal EU reforms in terms of adopting a new enlargement methodology prior to setting a date.

However there is strong pressure from numerous EU countries to allow the two countries — especially North Macedonia — to start negotiations, and the European Council is expected to reconsider enlargement before the EU-Western Balkans summit in Zagreb in May 2020.

The decision was a grave disappointment especially in Skopje, as EU leaders were expected to decide to open membership negotiations with North Macedonia in October 2019, particularly after the country changed its name and resolved the name dispute with Greece.

What is positive is that the country is set to become the 30th Nato member in 2020 after it signed the Prespa agreement which solved the name dispute with Greece. Spain will be the last Nato member to sign the accession protocol, which it is expected to do in January.

S&P Global Ratings said in October that the European Council failure to set a date to launch EU accession negotiations with North Macedonia and Albania will probably have limited short-term economic consequences, but in the long-term it could potentially weigh on the two countries' reform commitments.

North Macedonia’s parliament is expected to be dissolved in February to open the way for the snap vote. Regular elections were to be held at the end of 2020.

Prime Minister Zoran Zaev stepped down at the beginning of January, and North Macedonia’s parliament approved the interim government led by former interior minister Oliver Spasovski, and including some ministers from the conservative opposition VMRO-DPMNE, on January 3. The government will be responsible for organising a free and democratic election.

Other priorities in the short period of time before the election will include finalisation of North Macedonia’s Nato accession process, the launch of the EU accession negotiations, economic development and judicial reforms.

The country’s last general elections were held in December 2016, but the government led by Zaev only took office in May 2017, as it took months to form a parliamentary majority.

North Macedonia’s government is projecting economic growth of 3.8% in 2020 that will be driven by domestic consumption and the recovery of investment.

The growth of domestic consumption is seen at 3.3% in 2020, due to wage hikes, higher employment and increased social protection of vulnerable groups of citizens.

The European Commission expects GDP growth of 3.2% for North Macedonia in 2020, but with a more difficult external environment ahead, net exports are not expected to contribute to the GDP growth over the forecast horizon.

The country’s inflation is projected by the European Commission to increase slightly over the forecast horizon, mainly as domestic demand is firming, backed by higher wages. Inflation is seen at 1.9% in 2020 up from 1.4% predicted in 2019. The government expects inflation rate to stay low at 1.7% in 2020, which means a period of stable prices.

Gross investments are planned to increase by 8% in 2020, boosted by investments in the public sector as well as support for investment activities of local and foreign companies.

North Macedonia plans a budget deficit of 2.3% of GDP in 2020 or a total of MKD17.38bn (€282.6mn). The gap will be lower than that of 2019, which will come in at about 2.5% of GDP. The moderate deficit reduction will directly affect the stabilisation of government and public debt in the medium-term.

European Commission expects North Macedonia’s fiscal balance to improve gradually, as the positive net effect from recent policy measures (the pensions deficit, social assistance reform in force since June 2019) is set to increase. However, subsidies for investment and employment are expected to be stepped up in 2020-2021. Risks to fiscal projections arise from possible increases in pensions (the government announced an increase beyond the agreed CPI-only indexation for 2020), and public sector wages.

North Macedonia’s general government debt is set to rise further in the coming years, as a result of primary fiscal deficits and financing requirements for significant repayment obligations in 2020 and 2021.

The European Bank for Reconstruction and Development (EBRD) said that the country's public debt is assessed as relatively high while the structure of government spending worsened further in 2018, shifting from capital to current expenditures.

The government should further improve revenue collection, reduce tax exemptions, rationalise subsidies and ensure long-term pension sustainability, the Commission said, noting that the introduction of fiscal rules is also needed as North Macedonia is the only Western Balkans country lacking such rules.

The European Commission also said that fiscal consolidation measures are having a beneficial impact on the primary balance, but are not sufficient to stabilise debt level.

North Macedonia is rated BB-/Stable/B by S&P and BB/negative by Fitch.

The last time, North Macedonia issued a Eurobond was on January 11, 2018. The seven-year €500mn Eurobond was sold with an annual interest rate of 2.75% and funds were aimed at financing the budget deficit and to repay all debts.

No new Eurobond issue is planned for now.

The World Bank said that lending continued its robust growth in 2019 with a rise in corporate lending, according to a World Bank report. The survey of credit activity indicates a continued rise in lending, based on higher demand and easing of credit requirements.

The latest data from the central bank showed that the total assets and liabilities of the North Macedonia’s commercial banks and saving houses totalled MKD629.16bn (€10.2bn) in November 2019, 10.2% up from a year earlier. Loans increased 6% y/y in November and were up 1% on a monthly basis.

The merger of SBM and Ohridska will make a new bank that will be the fourth largest on the market with 12-13% market share.