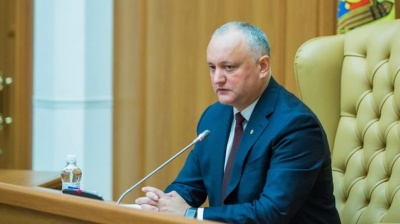 Moldova has undergone major political turmoil since the February 24, 2019 elections: three governments succeeded each other during the year and pro-Russian President Igor Dodon eventually gained full control over the executive.

Dodon’s Socialist Party (PSRM) first teamed up with the pro-EU ACUM bloc at the end of June to overthrow the government of the Democratic Party (PDM), and later in mid-November it teamed up with the Democrats (that underwent a political re-positioning after its leader Vlad Plahotniuc left the country) to overthrow the government headed by ACUM’s Maia Sandu.

Overall, it was the year of President Dodon, who defeated both his rivals. Plahotniuc, who had been increasing his control over all state structures until June 2019, fled the country and is now being pursued by the prosecution office that is gradually coming under the control of the president. Meanwhile, Sandu has lost her credibility among pro-EU voters after her deal with the pro-Russian president.

Furthermore, Dodon managed to pursue his plans with the support of Moldova’s Eastern and Western development partners, which brokered the PSRM-ACUM coalition in June.

The second government appointed by Dodon this year, headed by his former adviser Ion Chicu, was installed by the Socialists following major technical mistakes by Sandu in a dispute with Dodon over how Moldova’s chief prosecutor is appointed.

Moldova’s Western development partners welcomed Sandu’s government, and the International Monetary Fund (IMF) resumed its financing during the summer. Now, the European Union had expressed concerns after Dodon appointed his adviser as prime minister, as has Romania’s new Prime Minister Ludovic Orban. This could have repercussions later on; Chicu does not rely, at least currently, on the IMF’s support, but that might change if the $500mn Chicu says he expects from Russia fails to arrive.

Economically, the periods of political turmoil in 2019 were neither prolonged nor intense enough to create instability, although they inevitably caused investor confidence to deteriorate.

After growing by 5.8% y/y in Q2, during the climax of the recent political tensions, Moldova’s GDP increased by 4.3% y/y in Q3. In January-September, the average growth rate was 4.8% y/y.

The central bank’s decision to cut its key rate by 2pp to 5.5% despite inflation heading to 8% at yearend and the government’s generous public spending plans are likely to maintain robust growth rates in the coming quarters although the new executive (which took over in mid-November) drafted the 2020 budget on the safe assumption of 3.8% growth drafted by the previous government.

The major international financial institutions (IFIs) expect the country's economic growth in 2019 to be around 3.4-3.5% — a slowdown from 2018’s 4.9% growth rate, despite the 5.2% advance posted in H1 (and even compared to the 4.8% y/y performance in January-September).

The GDP growth in the first three quarters of 2019 was superior to the government’s 4.2% full-year projection, while the World Bank’s cautious 3.4% forecast issued in October remains on the pessimistic side.

However, the World Bank’s forecast was assuming fiscal consolidation measures to be introduced by Sandu’s government that took office in July, after the pre-electoral fiscal stimulus and election-related spending seen by the World Bank as having driven the 4.1% y/y growth in Q1.

In fact, the growth rate strengthened under Sandu’s government during the second and third quarters, driven by lagged effects of past policies. More recently, with the change in government in November, the outlook changed from moderate fiscal consolidation to more fiscal stimulus. The new government informally headed by Dodon planned a budget deficit of 3.3% of GDP for 2020, one-third larger than in 2019, although the financing sources remain to be clarified.

The new executive, which took over in mid-November, drafted the 2020 budget on the safe assumption of 3.8% growth projected by the previous government. A 3.3% of GDP budget deficit is planned for 2020.

In the short term, the Moldovan government can count on pursuing Dodon’s plans using local banks’ resources after the central bank cut the monetary policy rate by 2pp towards the end of 2019. The structure of the budget will determine whether this spurs inflation.

While the long-term impact of the deep 2pp interest rate cut remains debatable, the move will provide safe and cheap financing from local resources for the government in case Moldova’s Western development partners freeze the financing on political concerns or the ambitious plans for $500mn worth of loans from Russia vanish. Separately, it will encourage retail lending with a positive impact on GDP.

In the business sphere, the European Bank for Reconstruction and Development (EBRD) said in November that Moldova’s competitiveness is the weakest in the Eastern Europe and Caucasus region.

The new government that took office in mid-2019 swiftly found itself embroiled a dispute with a new international investor. In August, NR Investments, controlled by financier Nathaniel (Nat) Rothschild, purchased the indirect control of Chisinau airport from Russian investors whose identity was never fully disclosed, represented by controversial Moldovan businessman Ilan Shor and his family. This prompted scrutiny of the 2013 deal under which the concession for the airport was issued, and NR Investments in turn claimed political pressure and warned of possible legal action against the authorities in Chisinau. However, at the end of 2019, NR Investments disposed of its holding to a Russian investor.

Controversy also surrounds the sale of flag carrier Air Moldova to Romanian low cost airline Blue Air and two individual investors. The Agency for the Recovery of Criminal Assets (ARBI) and the National Anticorruption Centre (CNA) announced in October they had seized assets worth MDL670mn (€34.5mn) from Air Moldova as part of a money laundering investigation. The same month, Blue Air exited its stake in the airline.

However, other investments are still in the works. Among them, major Moldovan grain trader and processor Trans-Oil said in late 2019 it will build a sunflower oil plant with a processing capacity of 700 tonnes per day at the country’s sole international port Giurgiulesti, and Balti Free Economic Zone (ZELB) will borrow €5mn to create a Park for Innovation, Research and Development in Engineering (PICDI) that will focus on mechanical engineering and digital technologies.

Moldova’s banking system is gradually recovering after the regulatory framework was thoroughly revised and the biggest banks are now controlled by transparent foreign investors. Lending has taken off as well, although the bias towards retail lending remains a problem.

Significant progress has been achieved in the financial sector’s reform agenda, the International Monetary Fund (IMF) concluded when completing the third and fourth reviews under its programme with the country. Important measures to secure shareholder transparency and fitness and probity of the domestic banking system have been completed. Progress has been achieved in improving supervision, regulatory frameworks, unwinding bank related-party exposures, and strengthening financial safety nets.

Moving forward, the exit of the second largest bank from temporary administration, addressing rising risks in the non-bank financial sector, and improving the AML/CFT framework will be critical, in addition to making decisive progress on asset recovery.

The volume of new loans extended by Moldovan banks increased by 26.1% in the third quarter of 2019 compared to the third quarter of 2018 as the interest rate on new loans increased insignificantly to the level of 8.16%. After a period of almost three years of stagnation, the population has begun to borrow more consumer loans and mortgages from banks. According to experts, developments in this regard have been determined by the fact that in the last year the lending interest rates have been historically low, varying between 7% and 10%.

In addition, the central bank claims that it has created conditions to stimulate lending in the national currency to companies, to reduce systemic risks for the country's economy. In the first nine months of 2019, the country's financial and banking institutions issued new loans worth nearly MDL17bn (€870mn), up 29% over the same period of 2018. MDL7.3bn were loans expressed in foreign currency, the same level as in the same period of 2018.