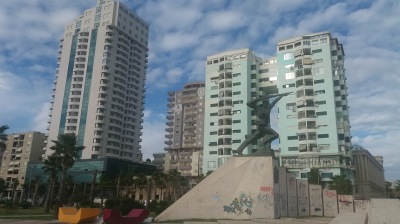 The coastal city of Durres was among the areas worst hit by the November 2019 earthquake.
By bne IntelliNews January 6, 2020

The biggest question facing Albania in 2020 is whether EU countries will set a date for the start of accession talks at the EU Council summit in May 2020.

Albania, along with North Macedonia, failed to obtain a date to start EU accession talks during the previous EU summit in October 2019, due to the veto by French President Emmanuel Macron. Macron talked of a rethink of the enlargement process, but other EU member states have been pushing for a green light at the next summit.

Judicial, administration and electoral reforms are the priorities for the country in its EU accession path. The country is also required to strengthen the fight against crime, corruption and drug trafficking.

Another failure to secure a date to start talks would have negative political repercussions at home and most likely set back the reform process.

Albania is due to hold a regular election in 2021, but the main opposition Democratic Party is pressing for a snap general election as the way out of the political crisis in the country. Opposition MPs handed over signed statements in February 2019 giving up their parliamentary seats and demanding a fresh election. However, Prime Minister Eli Rama’s Socialists won a majority of seats in the last election, and is unlikely to call a snap election.

2020 will be a year of post-earthquake reconstruction, after the country was hit by a strong quake on November 26, killing 51 people and leaving thousands without homes.

The quake has thrown out economic projections for 2020, as the government starts to rebuild infrastructure in affected areas which include the country’s main port city Durres.

Even before the quake, the Albanian government was forecasting that the country’s economic growth will decelerate slightly to 4.1% in 2020, from 4.3% projected for 2019. The Albanian economy expanded strongly by 4.1% and 3.8% in 2018 and 2017, respectively.

In their latest projections, the International Monetary Fund (IMF) forecast 3.9% economic growth in Albania in 2020, while the European Commission projects the Albanian economy will expand by 3.7% in 2020.

Economic activities are expected to rebound in the next two years on the back of a continuing solid increase in household spending. Risks to this forecast are mainly on the downside due to the deteriorating external environment and the tense political climate in the country. The conclusion of large energy projects is expected to result in a moderation of construction-related imports and an expansion of domestic energy production capacities.

As a result, the current account deficit is expected to gradually contract to some 5% of GDP by the end of 2021, covered predominantly by FDI inflows. However, downside risks arise from slow growth in Albania’s key trading partners in the EU, especially Italy. According to Raiffeisen, domestic political disputes could weigh on the economy, while the financial effects of the earthquake on the economy are not yet clear.

When the parliament endorsed the budget in December, Prime Minister Edi Rama said the main parameters would remain as planned. However, Tirana is still assessing the reconstruction costs following the deadly earthquake in November 2019 that left thousands of people homeless.

“Reconstruction of damaged dwellings is foreseen to start shortly after the estimation of damages by end of January 2020. The government will start to reconstruct with an amount of $200mn but predicts to allocate up to 0.4% of GDP,” said Raiffeisen in a note on Albania.

“The budget deficit is contained with an estimated value of 0.5% of GDP till October 2019 and even though the expenses are usually postponed for the year end we do not expect a budget deficit higher than 2% of GDP. But for the next year [2020], we predict expansion of the budget deficit to 2.2% or higher to cover the financial effects of the natural disaster.”

According to Finance Minister Anita Denaj, assessments are underway and the final cost of reconstruction will not be known until the third week in January, ahead of a planned donor conference.

The government has already allocated ALL20bn for reconstruction, but more will be needed, Denaj said in an interview with Euronoews Albania. The amount “will be supported by an increased amount of financing from borrowing, but aiming nevertheless to maintain fiscal parameters, depending on Albania’s economic development,” Denaj said in the interview.

According to the 2020 budget, money will be allocated to support government-initiated reforms promoting economic growth, employment, improving the quality of services to citizens and the EU integration process. Priority sectors were education, health, agriculture and infrastructure, which are important to stimulate potential growth in the economy.

According to the European Commission, Albania’s budget execution improved in the second half of 2019, with both revenue and expenditure broadly in line with the plan. A budget deficit below 2% of GDP is expected by the end of 2019. In the absence of additional measures, the deficit is forecast to hover around 1.5% of GDP in the medium-term.

The main fiscal risks stem from the possible further accumulation of payment arrears and from the materialisation of contingent liabilities from public-private partnerships (PPPs).

The government expects that by the end of 2020 Albania’s public debt will drop to 62.2% of GDP, from 64% of GDP in 2019, and will decline further below 60% of GDP in 2021. However, the European Commission said that although Albania’s debt ratio is set to remain on a declining path, it is projected to remain relatively high, at around 62% of GDP in 2021.

The last time Albania issued a Eurobond was in October 2018. The seven-year Eurobond worth €500mn will be used to repurchase €200mn of the outstanding €450mn Eurobond due in 2020 and to cover the budget deficit.

Belarus economy increasing well managed, but remains vulnerable to external shocks
6 days ago
TURKEY INSIGHT: With the lira through the looking glass, global finance questions whether Erdogan can sell eurobonds
8 days ago
Tajikistan: Coronavirus brings bonanza of aid, but zero accountability
9 days ago
After reopening, Armenian economy continues to struggle
9 days ago
Misery vs death
13 days ago