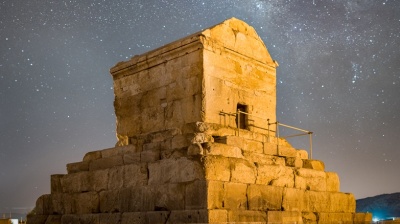 Tomb of Cyrus the Great, founder of the first Persian Empire, in Pasargadae, Fars Province.
By bne IntelIiNews April 1, 2020

The point here is that whether you’re anti-regime or pro-regime, or somewhere in between, you shouldn’t begrudge the ‘ordinary’ Iranian a kind thought or wish. However you describe Donald Trump (a sociopathic bully? A principled American?), there’s no mistaking the fact that Iran is up against a ruthless adversary who appears to think that wrecking the present-day hopes and aspirations of millions of regular Iranians is necessary collateral damage if he is to bring the Islamic Republic to heel.

Which takes us to likely the most crucial crossroads moment for Iran in the 2020/2021 year ahead: the November re-election or otherwise of the tormentor-in-chief. Any last chance Trump had of building bridges with Iran was probably blown away in early January when he ordered the drone strike assassination of second most powerful Iranian official and de facto head of its military Major General Qasem Soleimani. The move, almost certainly contrary to international law, brought outpourings of grief from huge numbers of Iranians (with a good number of moderates and reformists among them) on the streets.

Sentiment in Iranian society against Trump must also have been turned by his refusal to budge on his “maximum pressure” sanctions to ease flows of medicines and medical equipment into Iran even as the country’s death toll from the coronavirus (COVID-19) pandemic began to climb into the thousands.

Both the hardline political masters of Iran, led by Supreme Leader Ayatollah Ali Khamenei, and the pragmatic, moderate government of President Hassan Rouhani (somewhat hobbled lately when the hardliners barred many reformists from standing in the parliamentary elections, thereby giving them a grip on the legislature) plainly need to see Trump gone. A Trump emboldened by a second term might very well push for an end-game with Iran, the ultimate consequences of which don’t bear thinking about. So what likelihood is there of Iran—top officials of which often belittle Trump as a rogue president and depraved clown up against an ancient civilisation—entering into bold actions in the months ahead that could increase the US president’s unpopularity at home.

The likelihood may rise if Trump’s ongoing bump in the polls is sustained in the weeks and months ahead. One option for Iran would be to ramp up sponsored militia attacks on US troops in Iraq in line with Tehran’s policy of ridding the Middle East of American forces (interestingly, Trump was on April 1 warning of a “sneak attack” in Iraq by Iran or its proxies, while hours earlier an aide to Khamenei cautioned the US on consequences of “provocative actions” in the country). His bluff called, Trump might find himself faced with looking soft should he not hit back hard at the Iranians, while on the other hand a major attack on Iran or Iranian interests might risk drawing him into foreign adventures that might not play well with his base at home.

In unilaterally walking out on the 2015 nuclear deal between Iran and six major powers, Trump said he would use sanctions to crush Iran into accepting a tougher accord that would curb its nuclear programme and ballistic missile development and mean an end to Tehran supporting powerful militias in various Middle East conflict zones (and there’s no doubt Iran has felt the pain, with GDP down 4.9% in 2018, 8.7% in 2019 and now unlikely to meet the World Bank projection of 0.0% in 2020 given Iran’s quite wretched experience of the pandemic). But Europe’s big three—the UK, Germany and France—as well as fellow deal signatories Russia and China stuck with Iran, saying the agreement—supposed to shield Iran from major sanctions in return for nuclear programme compliance—should be preserved because the Iranians had essentially fulfilled all their obligations.

The solidarity between the ‘E3’ and Iran, however, gradually fell to pieces as Tehran pointed out that Europe had failed to come through with any meaningful assistance to protect the Iranian economy from the punishing US sanctions. Iran, in a high stakes bid to pressure Europe into delivering economically, has switched to in-your-face non-compliance with the nuclear deal, but—particularly with the new Boris Johnson UK administration desperate to pal up with Trump to secure a good post-Brexit US trade deal—the gambit is yet to produce results, with Paris, Berlin and London demanding Iran return to meeting the terms of the accord or face consequences that could even mean the return of UN sanctions.

Wary of caving to “bully boy”

The Europeans, wary of being seen to cave to the “bully boy” Trump, have of late slowed the process of holding Iran to account for its deal violations and the coronavirus emergency—during which it seems the E3 have been lobbying Trump to ease up on his sanctions to give Iran more of a chance of getting on top of its virus outbreak, while also, according to some reports, urging him not to veto a request to the IMF from Iran for $5bn of emergency funding—appears to have eased the pressure even more on the Iranians.

The extent of the emergency caused in the US by the pandemic, meanwhile, would seem to mean that Trump will have little time to concentrate on turning the screw on Iran in the time he has left in office. In his dreams, no doubt, he sees Iranians rising up, sweeping the regime away and praising him for opening the door to a new era of freedom. But there is still a disjuncture in Iran between the working class protestors wont to foment unrest in response to economic hardship and middle-class student demonstrators more into testing the authorities’ patience, for instance, with protests against the shooting down of an airliner and subsequent cover-up or the denial of human rights. Only should those two groups unite might the theocracy tremble, while Tehran’s proven ability to at will turn off the internet and close down social media when serious trouble flares up means fanning the flames of discontent inside Iran has become that much more challenging.

Economic misery not going away

Iran’s economic misery is not going away any time soon, despite the sometimes ingenious, sometimes devious efforts made amid the “resistance economy”. The Iranian rial, knocked by the global COVID-19 upheaval, stands at a pitiful 166,000 to the dollar. The price of oil (for what oil Iran can still sell in the face of the US attempt to drive its crude exports to zero) has sunk to what a few months ago were hardly imaginable lows as big producers fight it out for fallen demand and now even the trade breakthroughs Iran was managing to strike with countries in the Caucasus, Central Asia and Russia may be curtailed by the economic ill-effects of the destructive blow the coronavirus has dealt to economies everywhere.

Getting a handle on where Iran’s economy is headed this year is a thankless task right now given the as yet unknown ramifications of the health emergency’s impact on world finances and markets longer term. All one can say is that alongside the outdated World Bank growth predictions, there is forecasting from the IMF from last October that says Iran will have a 2020 fiscal deficit of 5.1% (hugely unlikely given the COVID-19 necessitated spending to keep people and companies afloat), needs an oil price of $194.6 a barrel to balance its budget in 2020 (the chance would be a fine thing, Iran is busy undercutting the actual oil price on the grey market), can expect annual inflation of 31% this year (that figure too has gone in for a potentially big revision), and can anticipate exports of goods and services falling further to $55.5bn this year from $60.3bn last year and $103.2bn in 2018 (all bets are off). But all one really need say is Iran’s Persian year will almost certainly hinge on Tuesday, November 3 when it will discover whether the dream of a post-Trump world will be made or broken.