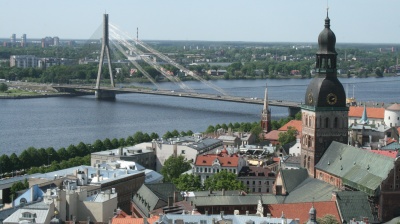 At the end of 2018, three months after Latvia's general election, there was still no government in Riga.

The fragmented parliament that emerged in the aftermath of the October vote has been struggling to piece together a functioning coalition. The fourth prime ministerial candidate is currently trying to bring together party interests to the benefit of the Baltic state lying on the eastern flank of the EU and Nato.

While there might be a government in December, the bumpy process of forming it seems a harbinger of a year of fragile political balance in Latvia in 2019. That could be exacerbated further because of the presidential vote due in 2019 as well, even if the president’s political weight is less significant than the parliament’s.

Even the country’s central bank took a swipe at politicians’ disagreeing over the formation of a government. “A functional government with a clear vision as to its main future policy directions is quite a decisive factor when investors decide on investing in any country,” said the Bank of Latvia.

Economically, Latvia appears to be in for another good year. The Baltic state – alongside neighbours Lithuania and Estonia – is set to enter the new year as a “Goldilocks economy,” or an economy with balanced growth that avoids inflation on the one hand and too big a slowdown on the other hand, Swedbank said on December 19.

Latvia’s economic growth is now expected to come in at 3.5% in 2019 by the Bank of Latvia, which upped its previous forecast by 0.5pp. The European Bank for Reconstruction and Development (EBRD) forecasts an economic expansion of 3.5% as well, while the European Commission has it at 3.2%.

“Private consumption, investment and, to a lesser extent, exports will remain the drivers of growth, yet the latter is already decelerating significantly,” the central bank said on December 18.

“A long-term challenge on the supply side is the tightening labour market, as businesses report shortages of qualified labour force, as well as the low level of investment. Despite positive growth, the level of investment remains insufficient,” the central bank warned.

Inflation is expected at 2.9% in Latvia in 2019, while government deficit will increase rather slightly by 0.2pp to 1% of GDP, the central bank also said.

With no government in place, Latvia has not yet adopted its budget for 2019, leading former finance minister Andris Vilks to warn that the budget for the year may not be put into operation until March 2019 at the earliest. As an interim measure, a temporary budget has been passed by the parliament.

However, the delay has knock on effects for lower levels of government, with the city of Riga saying it will not pass its budget for 2019 until the state budget is in place.

Latvia as hit by wildfires in summer 2018, as temperatures soared across northern Europe. Latvian farmers suffered losses of €359mn due to the severe drought this summer, according to a report from the agriculture ministry quoted by local media. Forest owners were hit by a further €92.9mn worth of damage from wildfires that broke out across the country over the summer, forcing Riga to seek help from neighbouring countries.

Still, the sector was the subject of one of the biggest deals of the year, as Sweden's Bergvik Skog sold its forests and enterprises in Latvia to forestry cooperative Sodra, also from Sweden, in a €324mn deal.

Meanwhile, in the energy sector, Latvia is ramping up investment into renewables, in particular wind power, with a €250mn investment into a wind farm planned by Sweden’s Eolus, though this has met with opposition from local residents.