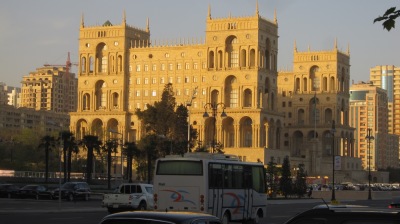 Politics
In coverage of Azerbaijani politics three big topics continue to hog the headlines—energy cooperation, human rights and the longstanding frozen conflict (with sporadic flare-ups) between Azerbaijan and Armenia over the Nagorno-Karabakh breakaway region.

When visiting Baku in late August for talks with Azerbaijani President Ilham Aliyev, German Chancellor Angela Merkel took on each of these crux issues. With a new post-revolution government in office in Armenia there might be some limited scope for freshly energised discussions on achieving a Nagorno-Karabakh settlement (though there have been reports lately of Azerbaijan jockeying for advantageous territory by seizing bits of supposedly neutral territory on the Nakhichevan border), but it was with the other two matters that Merkel had to perform a delicate balancing act.

With its eye on diversifying away from over-reliance on Russian gas, the EU is looking to purchase Azerbaijani gas flows that will reach Italy via pipelines laid along the Southern Gas Corridor (SCG), taking a route that traverses Georgia, Turkey, Greece, Albania and then runs under the Adriatic Sea. Azerbaijan has invested tens of billions of dollars in developing the Shah Deniz 2 gas field in the Caspian Sea to feed it. But at the same time Aliyev has in the past two years faced mounting allegations of carrying out a targeted crackdown on dissent and persecuting opposition politicians. Baku may be expected to rein in its human rights abuses and allow a reasonably active civil society if it wants Merkel and fellow European leaders to help build its supercharged hydrocarbon export dream. Merkel pointedly also met rights activists during her stop-off in the Azerbaijani capital.

The idea that there is as yet any permitted, meaningful opposition in Azerbaijan is still fanciful—thousands gathered in a Baku stadium in April to protest against the “rigged” election victory that gave Aliyev another seven years—but when it comes to its big SCG gas ambitions, the country might yet come to rue some damaging political trouble in Italy.

Italy’s populist 5-Star Movement in late October backed off from its electoral pledge to stop the last leg of the SCG pipeline project on environmental grounds. For now, the way to the completion of that leg, the Trans Adriatic Pipeline (TAP), appears to have been cleared but the debate may not be over.

An enduring PR headache for the Aliyev regime are the regular reports connecting Azerbaijan to huge money laundering scandals such as the “Azerbaijani Laundromat”. London’s tabloids continue to follow the plight of Zamira Hajiyeva, the wife of the jailed former boss of Azerbaijan's biggest bank, state-owned International Bank of Azerbaijan (IBA). She has become known as the woman who spent more than $21m in luxury London department store Harrods over a decade. Britain's National Crime Agency (NCA) has secured the UK’s first-ever unexplained wealth order (UWO) against Hajiyeva, who in November was detained.

Economics
Azerbaijan’s parliament passed its 2019 budget based on an oil price estimate of $60 per barrel and GDP growth in 2019 of 3.6%, up from an expected 2% in 2018, and in line with the expansion anticipated by the IMF. 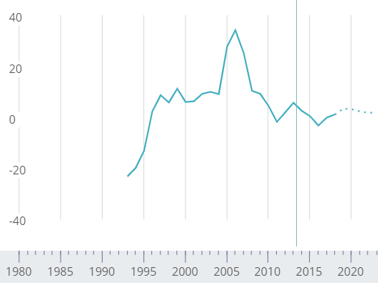 The hydrocarbon-rich nation of 9.9mn has climbed out of a slump thanks to the oil price recovery. It grew just 0.1% in 2017.

Oil and gas account for around three-quarters of the country’s state revenue and 45% of GDP. In its latest assessment of Azerbaijan, the European Bank for Reconstruction and Development (EBRD) said: “The ongoing expansion of gas production and export capacity is supportive of the growth outlook, which is projected at 1.5 per cent in 2018 and 3.5 per cent in 2019. On the other hand, the remaining vulnerabilities in the banking sector are a drag on the economic recovery.”

Other government estimates for 2019 are oil output of 38.5mn tonnes compared to 37.8mn expected in 2018 and natural gas production at 36.91bn cubic metres from 30.2 bcm anticipated for this year.

Finance
When state-owned IBA, the largest lender in the country, defaulted on $3.3bn worth of foreign obligations in May 2017 there were fears that Azerbaijan’s banks might start going down like dominoes. IBA went for a debt restructuring process that saw its obligations swapped for dollar bonds issued by IBA and the government.

In October, IBA said it was on the path to recovery, having achieved a profit of AZN319mn (€163mn) in the first nine months of 2018. The bank stressed that the figures for the nine-month period “reflect such positive trends in the bank's activities, such as the successful completion of the recovery process and the transition to a new stage of development”.

The lender had been plagued by problems ever since March 2015, when a sudden depreciation of the Azebaijani manat pushed the bank to the brink of default. The government rescued IBA and proceeded to increase its stake in it from 51% to over 80% over the years, by injecting capital and taking over AZN14.7bn ($7.3bn) worth of non-performing loans. But two years later it turned out that those moves were not enough.

IBA added in October that it has launched a number of new projects in the local financial market, which “strengthened the market position of the bank and covered such client segments as large corporate entities, small and medium-sized businesses, and individuals”.

S&P Global Ratings in August affirmed its ‘BB+/B’ Azerbaijan ratings, with the outlook kept at negative. “Azerbaijan’s economy is slowly recovering from the 2014/2015 terms of trade shock. The government’s fiscal and foreign exchange buffers remain significant,” the rating agency said.

Baku celebrated an eyepopping leap of 32 places to 25th among the 190 ranked economies in Doing Business 2019 after carrying out a record eight business reforms.

In the survey’s sub-categories, Azerbaijan came 2nd for Protecting minority investors; 9th for Starting a business; 17th for Registering a property; 22nd for Getting credit and 28th for Paying taxes. Its worst position was 84th for Trading across borders, while it was 40th for Enforcing contracts and 45th for Resolving insolvency. Despite the progress in Dealing with construction permits, the country only placed 61st in that sub-category.

While partly relying on Turkey to get its gas to European markets via the SCG pipelines, Azerbaijan will also continue to pour capital into the Turkish oil refining and petrochemical industries. Azerbaijani national oil company Socar is now the biggest foreign investor in Turkey, having lately inaugurated, at a cost of $6.3bn, the first new oil refinery in the country since 1975 in a move that should secure raw materials for a series of petrochemical expansions at its Petkim subsidiary located near Izmir. Multi-billion-dollar investment decisions lie ahead.

Back home, Socar has set up SOCAR Polymer to drive up its currently small domestic petrochemical production. Azerbaijan believes it can boost its non-oil exports by 16% with petrochemical output at new plants developed by the subsidiary. Annual sales of polypropylene and high-density polyethylene made at Sumgayit Chemical Industrial Park outside Baku are presently expected to have an annual value of $350mn, with around 75-80% of output earmarked for export.

BP, which has taken the lead in developing Azerbaijan’s Shah Deniz gas fields, is now interested in developing renewables in the country and also petrochemical production alongside the new refinery built by Socar in Turkey.

Russia’s Rosatom, meanwhile, is proposing to build a nuclear power plant in the country.

Azerbaijan has proclaimed it rejects the sanctions regime targeted at “brother nation” Iran by the US, but how much business that political statement will realistically permit under the watchful eye of Washington is another matter.

There looks to be some scope for forming satellite technology joint projects with the Iranians. Azerbaijan is a leader in Eurasia when it comes to investing in satellite technology. It has launched three satellites in the past decade. Informal agreements have been struck to form a joint Iranian-Azerbaijani satellite project in the near future.