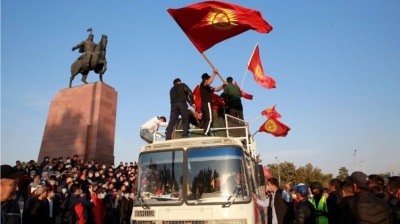 Kyrgyzstan’s Central Election Commission on October 6 annulled the results of the weekend parliamentary election but the concession appeared to come too late to stand a chance of appeasing opposition groups who said they had seized power after taking control of government buildings in the capital Bishkek and intended to impeach the president.

The president, Sooronbay Jeenbekov, said the country—strategically important partly because it hosts a Russian air base and is viewed by neighbouring China as a country in which it hopes to build its growing influence in Central Asia—was facing an attempted coup d'etat. He appeared to be in a precarious position, despite having ordered security forces not to open fire on the protesters who took to the streets to demonstrate against what they said was a fixed election. One person was killed and 590 wounded in the unrest overnight, the government said.

The opposition, which freed Jeenbekov’s predecessor and bitter opponent Almazbek Atambayev during the tumult, said it was already discussing the lineup of a provisional government.

Jeenbekov showed no immediate signs of relinquishing power, but the commission threw out the results of the parliamentary poll that were favourable to the president—the outcome handed most seats to establishment parties that support closer links between the former Soviet republic and Moscow—after the government headquarters were stormed. Some local reports spoke of Jeenbekov’s supporters being gathered in the southern city of Osh, where the president’s brother Asylbek Jeenbekov called for unity and order. The whereabouts of Jeenbekov were unclear.

RFE/RL correspondents reported from Bishkek that lawmakers split into two groups and wer holding sessions in two separate sites in the Kyrgyz capital. One group, led by parliament speaker Dastan Jumabekov, was said to be holding a session at the Dostuk Hotel. Journalists were not allowed to attend the session. Another group, consisting mainly of opposition parties, gathered in parliament itself with the meeting agenda unclear.

Kyrgyzstan has a history of political volatility. Two of its presidents have been toppled by revolutions in the past 15 years.

The Russian embassy in Kyrgyzstan issued a statement in which it supported resolving the matter through legal means while safeguarding people's safety and domestic stability.

Bishkek was littered with burnt out cars on the morning of October 6. Protesters took control of the main government building, known as the White House. They threw official documents from the windows and appeared to set it ablaze. Emergency services put out the fire.

Interior Minister Kashkar Junushaliyev reportedly did not show up for work on October 6. Local media outlets quoted an interior ministry spokesman as saying that Kursan Asanov, an opposition politician and former senior security official, had taken over as acting interior minister. He added that police had been deployed to  prevent looting.

The second-largest gold deposit in Kyrgyzstan, Jeruy, was shut down on October 6, its Russian-owned operator said.

Madumarov stated that Jeenbekov's intention to meet with the leaders of the opposition parties "has lost its relevance".

"He should have met with them yesterday, today such a meeting is irrelevant," the Council added.

The Union of Banks of Kyrgyzstan, meanwhile, announced that it was disconnecting the country’s ATMs.

Atambayev was jailed in June to 11 years and two months in prison for corruption after a bitter falling out with Jeenbekov last year.

Much of the action in Bishkek has centred on Ala-Too square, which was also the site of major demonstrations during Kyrgyzstan’s colour revolutions in 2005 and 2010.

There were hours of speeches from politicians demanding the election be rerun.