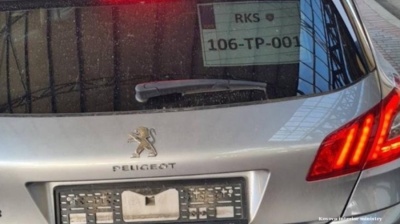 The latest tensions were sparked by the seemingly banal issue of vehicle license plates. / Kosovo interior ministry
By Alex Young in Belgrade December 13, 2022

One of the pivotal achievements of EU diplomacy, the 2013 Brussels Agreement between Serbia and Kosovo, will soon celebrate its tenth anniversary. Its main achievements, however, are quickly unraveling and north Kosovo faces its worst instability since the 2011 barricades.

Grounded in a multitude of disagreements deriving from Belgrade’s refusal to accept Kosovo’s independence, the latest tensions were sparked by the seemingly banal issue of vehicle license plates.

In September 2021, Kosovo’s moves to ban Serbian license plates prompted temporary barricades. An agreement was eventually reached on the use of cumbersome stickers to cover state insignia.

The issue emerged again in July when Pristina pressed ahead with forbidding the use of plates issued to Kosovo Serbs by the Republic of Serbia on its territory and announced that Serbian ID cards would no longer be accepted upon entry to Kosovo.

Though the latter issue was largely solved, the former lingered on despite repeated calls by the international community for it to be kicked down the road. Serbia’s president, Aleksandar Vucic, however, simultaneously ramped up pressure for the establishment of the Association/Community of Serb-majority municipalities.

Faced with the prospect of issuing fines to their own community for using specific Republic of Serbia license plates, Kosovo Serb police in the four northern municipalities resigned en masse. Kosovo Serb ministers and MPs quit too, as did mayors and other elected officials from north Kosovo.

They were followed by judges, prosecutors, local government employees, and others; basically, anyone who had integrated into Kosovo structures in the previous decade. Their return was conditioned upon a solution to the license plate issue and the establishment of the Association/Community.

The resignations created a security vacuum that has been partly filled by the Kosovo Police’s special operations units, most of whom are ethnic Albanian and largely rejected by the local ethnic Serb community. There have been various reports of harassment and intimidation.

A deal was reached in late November whereby Serbia would stop issuing license plates with Kosovo denominations, whilst Kosovo would ‘cease further actions related to re-registration of vehicles’. Both sides also committed to ‘fully concentrate on the proposal on normalisation of their relations’.

Pristina, however, refuses to budge on the Association/Community. A central pillar of the Brussels Agreement, it would give the Kosovo Serbs collective competencies - or ‘full overview’ - in key domains such as education, health, and economic development.

Many in Pristina refer to it as Kosovo’s own Republika Srpska, the predominantly Serb entity blamed for gridlocking Bosnia & Herzegovina. Kosovo’s Prime Minister Albin Kurti has been a particularly staunch opponent and has largely ruled out its creation.

Despite repeated calls from the EU and US, Pristina has failed to fulfill one of the fundamental obligations of the Belgrade-Pristina dialogue. Whilst there are various agreements outstanding (electricity, diploma recognition etc.), the Association/Community is arguably the most fundamental.

The situation in the north therefore remains extremely tense. Kosovo's efforts to organise local elections in the north in late December despite a boycott of Srpska Lista, the main Kosovo Serb party, were met with targeted violence. Pristina ultimately agreed to their postponement, again under international pressure.

The arrest of a Kosovo Serb former member of the Kosovo Police on December 10 poured further fuel on flames the EU felt it had temporarily dampened. Roadblocks were once again erected and residents mobilised through text messages and air raid sirens. A stun grenade was thrown at a reconnaissance patrol of EULEX (the EU’s rule of law mission in Kosovo).

Vucic has spoken about potentially requesting the return of Serbian security personnel for the first time since they were forced out in 1999. Though a possibility afforded by UN Security Council Resolution 1244, at least in certain limited instances, it requires the approval of the commander of Kfor, Nato’s presence in Kosovo. Vucic knows that such a request will be rebuffed, silently or otherwise, but it plays well domestically.

It also reinforces a stance that Belgrade has regularly employed since Russia invaded Ukraine; namely to point to contradictions in the approach of Western powers to international law. Serbia has simultaneously voted for UN resolutions condemning Russian actions, whilst refusing to sign up to European sanctions. It remains keen to stress the primacy of the UN in global affairs.

The risks of further escalation, including localised violence, should not be underestimated, even if the presence of Nato deters military deployments on Belgrade’s part. Those Serbs who resigned from the Kosovo Police could be reintegrated (formally or not) into Serbian policing structures - a return to the situation that existed prior to 2013. This would constitute a direct challenge to Kosovo’s sovereignty and prompt a firm response.

Criminal groups, meanwhile, have interests to protect and armored personal on whom they can call. Unverified rumours that their numbers have been supplemented by the Wagner Group should, however, be treated with the greatest of skepticism given the extent of disinformation swirling around.

Russia’s war in Ukraine has fundamentally altered the calculus of all concerned, though without any clear guidance or certainty. For Pristina, it is a defining moment for Europe; a battle for values that can be articulated through support for Kosovo’s statehood and incorporation into international bodies like the Council of Europe. Kosovo’s application for EU membership is imminent. For Belgrade, it is a delicate balancing act between Russia and the West.

The EU - under the stewardship of its envoy for the Belgrade-Pristina dialogue and the Western Balkans, Miroslav Lajcak - has been keen to imbue the normalisation process with a renewed sense of momentum. An agreement sometime in 2023 has been mooted.

A much-speculated French-German proposal would see acceptance of Kosovo's jurisdiction and symbols by Serbia, respect for its territorial integrity, and a pathway towards membership of certain international bodies. Extensive financial assistance would be offered and possibly an accelerated path towards the EU.

It would not be a final agreement. That would have to wait a decade or so, when both Serbia and Kosovo would ideally be on the verge of EU membership. Though fraught with difficulties, including the five EU non-recognisers, it offers the most tangible path towards a comprehensive settlement.

The current situation in north Kosovo, however, is threatening to undo a lot of progress made to date in terms of integrating Kosovo’s Serbs. Though haphazard and unpopular, the Kosovo Serb community have gradually become more accepting of the reality of Kosovo’s independence, even if they refuse to recognise it. Many now bear Kosovo ID cards and even passports. Thousands depend upon the Kosovan state for their monthly salary.

A case in point is the former civil protection unit, better known as ‘the Bridgewatchers’, who were renowned for intimidating and surveilling ethnic Albanians in the north. Almost five hundred of their number now work for Kosovo institutions. It is little spoken about, but sometimes silence is preferable to humiliation.

Violence in the north would tear apart the Belgrade-Pristina dialogue process, setting back the normalisation process and slamming the door firmly closed on a possible deal. The stakes are high and European diplomacy is being profoundly tested. With each party continuing to point fingers at the other however, the prospects for stability look bleak.

PANNIER: Uzbeks, Kyrgyz cooperating to level unthinkable 10 years ago
5 days ago
PANNIER: A very Turkmen coup
9 days ago
OPINION: Bulgaria sets itself a tough task with Burgas-Alexandroupolis pipeline revival
12 days ago
NEMETHY: Is Ukraine War the beginning of World War III?
12 days ago
RIDDLE: The Russian army in 2023
13 days ago