Oil prices fell below $80 for the first time in four years on November 5 after Saudi Arabia and other Opec members refused to cut production. But economists say despite the large movements in the oil price, the de facto freely floating ruble will mitigate much of the economic pain to Russia.

"The high dependency of the Russian economy on oil is usually surrounded by myths regarding the importance of the fuel sector in Russia’s GDP production," Natalia Orlova, chief economist at Alfa Bank, said in a note entitled "Revisiting Russia’s sensitivity".

Opec collectively supplies 40% of the world's oil, but it has preferred to keep producing rather than cut production to support prices, reports Bloomberg.

The Opec oil basket fell to $78.67 on November 4 – the lowest level since October 22, 2010, according to data compiled by Bloomberg. US oil production rose to the highest in at least 31 years amid slowing global demand, helping drive crude into a bear market since June. Opec’s biggest producers – Saudi Arabia, Iraq and Iran – are also offering biggest discounts to buyers in Asia since at least 2009. Opec will meet again in Vienna on November 27 to discuss whether to cut output to support prices.

"With oil price down from $115/bbl mid-year to current $85/bbl and the outlook cloudy, the market is discussing the consequences of this strong move for Russia. We see 3 channels of sensitivity: 1) trade balance and exchange rate; 2) GDP growth; and 3) the budget," Alfa’s Orlova said.

Alfa argues that while fuel production is important to Russia, it is not crucial. In physical terms the fuel sector contributes to around 20% of GDP. According to various estimates, the Russian fuel sector generates $40bn-50bn of profit for every $10 step-up in the price of a barrel. However, around 70% of it is sterilized through taxes, so the ultimate effect is to add around $15bn, or 0.5% of GDP, with each incremental change in price, according to Alfa Bank's estimates.

"In the case of sharp oil prices drop a la 2008-09, the negative effect is 0.8% per $10, reflecting contagion effect of lower trade balance and fuel value added on other GDP components," says Orlova.

Still, Russia's economy is increasingly sensitive to the really sharp drops in price, but even then it is associated panic that does the real damage. "According to our estimates, the $33/bbl drop in the average oil price seen in 2009 accounted for 2.4pp out of 7.8% Russian GDP drop, or 0.8% GDP per each $10/bbl. The remaining drop, according to EEG estimates, was attributable to the sudden stop of the global economy, which led to the contraction of the global demand for Russia’s non-oil (mainly metals) exports (40% of Russia’s 2009 GDP drop) and the closure of the external debt markets, which caused deleveraging on the local market (25% of the 2009 GDP drop), which was previously overheated by massive stockbuilding and debt accumulation," says Orlova.

Moreover, the growth of Russian oil production has lagged far behind the overall growth of the economy and so is not a crucial driver of economic growth. "For the last 10 years, the growth in oil and gas sector has only been around 1% year-on-year, including 1-3% annual growth in the last couple of years. Thus, the direct contribution of the oil sector to the economic growth is modest and the main concern over Russia’s dependency on oil should lie in the area of the financial impact of the oil prices volatility," says Orlova.

The major effect on the economy of falling oil prices is to drive down the value of the ruble. The rule of thumb is: each $10 fall in the price of a barrel of oil is equal to a RUB1.5-2.0/$ of exchange rate depreciation. With fuel accounting for two thirds of Russia’s annual exports, each $10 change in oil prices brings a change of $30bn in annual export revenues and $10bn-15bn trade surplus.

But the impact on the state's tax revenues is much more noticeable, as oil taxes account for up to half the state's revenues, although this is mitigated to an extent by the associated devaluation affects.

"Each $10 oil price drop lowers annual budget fuel revenues by $20bn and non-fuel by RUB100bn through the negative effect on overall GDP growth. However, the RUB1.5-2.0/$ depreciation boosts the FX-linked budget revenues by RUB300-400bn, and as a result, the net effect of the $10 drop is around $10bn of total revenues," writes Orlova.

The big difference to previous oil prices crashes (such as in 1997 when oil fell to $10 and stayed there on the back of the Asian crisis) is this time round the ruble has now been in practice free to float, which will absorb much of the shock and also allow the state to maintain its hard currency reserves instead of frittering them away on maintaining the exchange rate.

Alfa offers a fairly upbeat out look for next year as a result based on the expectation that oil prices will recover to $100 in 2015. "Under this assumption, we expect 1% GDP growth backed by $110bn current account surplus and a very small 0.4% of GDP ($7bn) budget deficit," says Orlova. "The extra budget revenues coming from the ruble depreciation will keep the Cabinet comfortable with financing investment growth, which we see as a driving force behind our next year growth case… The excess budget revenues which were made in 2014 thanks to the ruble depreciation will be enough to cover the needs of the budget deficit under $100/bbl in 2015 should ruble fluctuate at RUB40-45/$ range without borrowing on the market." 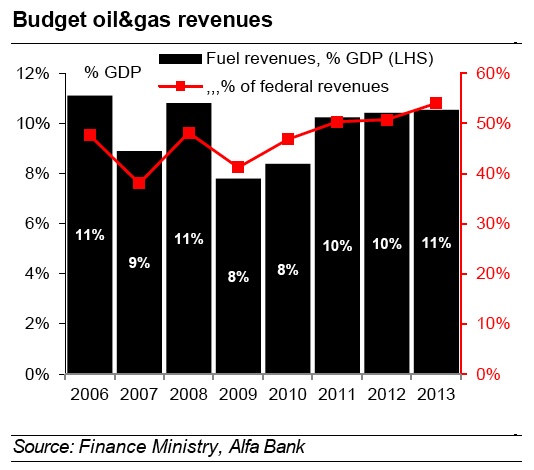