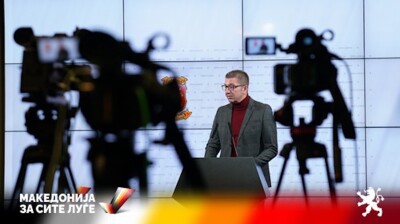 The leader of North Macedonia’s main opposition party VMRO-DPMNE, Hristijan Mickoski, on November 3 called for an immediate snap parliamentary election following the defeat of the ruling Social Democrats in the recent local elections.

In the second round of the local elections on October 31, Danela Arsovska, an independent candidate supported by VMRO-DPMNE, defeated the current mayor Petre Silegov, from the ruling SDSM, who was running for a second mandate. VMRO-DPMNE also won the majority of mayoral posts in other municipalities in the country.

SDSM leader and PM Zoran Zaev announced his resignation the same evening, when VMRO-DPMNE's candidates won most of the mayoral positions, including Skopje. However, Zaev has not yet filed his official resignation.

Mickoski believes that the possible new majority in the parliament will not be able to confront the challenges facing the country.

“Given the support received in the elections and in order to successfully deal with the crisis situation and to protect the interest of people, I am calling for immediate snap elections,” Mickoski said at the news conference.

The SDSM rejected the opposition leader’s call, saying that the Social Democrats and other parties from the ruling coalition won more votes for councilors than the opposition, adding that the current parliamentary majority is stable and that they will not vote for early elections.

“The parties of the ruling coalition won 419,180 votes for councilors in this election, which is 19,090 more than the votes obtained by the opposition parties,” the SDSM said in the statement.

According to the ruling party, in terms of councilor mandates, SDSM and the ruling coalition have 664 councilor seats, which is 61 more than those won by VMRO-DPMNE and the other opposition parties.

The SDSM’s coalition partner said that Zaev will officially submit his resignation in the next few days or by mid-next week at the latest, when the name of the candidate to replace Zaev will be known.

The new government will probably be elected within 10 days, Goran Milevski, leader of the Liberal Democratic Party (LDP), was cited by broadcaster Sitel.