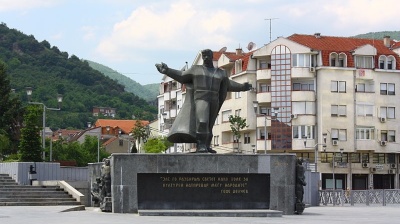 The case concerned fraud in the 2013 municipal elections in the eastern Macedonian town of Strumica (pictured).
By Valentina Dimitrievska in Skopje March 9, 2019

A court in Skopje sentenced the former secret police head of North Macedonia Saso Mijalkov to three years in prison in a local election fraud case, dubbed Titanik 2, on March 8.  Mijalkov, 53, was immediately put in detention.

This was the first verdict for the Special Prosecution Office (SPO) for Mijalkov, who also faces other trials, including over the destruction of surveillance equipment following the 2015 wiretapping scandal which brought down the previous government of the now opposition VMRO-DPMNE.

The court said that Mijalkov put pressure on election officials to annul results from some polling stations in the southern town of Strumica to allow a rerun in the local elections in 2013, to give the VMRO-DPMNE candidate a second chance to win.

A leader of the ethnic Albanian party DPA, Menduh Thaci, who influenced election commission officials on Mijalkov demand, was sentenced to three years and two months in prison in the same case.

Mijalkov is a cousin of former prime minister Nikola Gruevski, who fled to Hungary last November and was granted asylum there to escape serving a two-year prison sentence for the purchase of luxury Mercedes with budget money.

The SPO is tasked to probe high level crime and corruption.