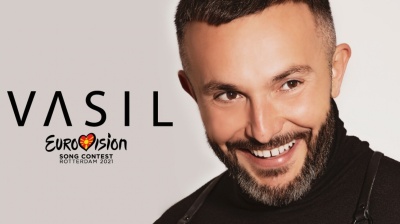 North Macedonia was forced to edit the official video for this year’s Eurovision song contest entry “Here I Stand” performed by Vasil Garvanliev to remove a controversial piece of artwork that looked like the Bulgarian national flag.

The video that doesn’t include North Macedonia’s national flag but displays a triptych with the colours of the Bulgarian flag was viewed as a deliberate provocation at a time when the country’s EU path has been blocked by Bulgaria’s veto and the two countries are locked in a diplomatic dispute over historical and language issues.

Some critics accused Garvanliev of introducing the Bulgarian flag into the video on purpose after he said previously that he has a Bulgarian passport because his grandmother was born in Bulgaria, and that Bulgaria and North Macedonia are the same country just divided by a border.

“Although with the Eurovision video I had a desire to showcase nothing but music and art, I am truly sorry for the misrepresentation of the work of our famous artist Zaneta Vangeli. No one involved in the realisation of the video filming nor representatives of the stated institution deliberately intervened in the artistic setting of the National Gallery Daut Pashin Amam [in Skopje],” Garvanliev said, according to eurovisionary.com.

“Thank you for the overwhelming support you are giving me these days, and because you believe in my sincere intention. I have been singing and representing [North] Macedonia and the Macedonian flag for over 20 years, and it will remain,” he added.

In a Facebook post, Garvanliev said on March 15 that he is a “music ambassador”, and had absolutely no intention to hurt anybody.

Eurovison is supposed to be non-political but politics almost invariably comes into it with voting often reflecting national and geo politics rather than the artistic merit of the entries. Ahead of this year’s contest, as well as the flag controversy in North Macedonia there has been an outcry over the nomination of Galasy ZMesta as Belarus’ entry. Galasy ZMesta is an overtly political band whose repertoire features songs that mock the mass protests against President Alexander Lukashenko, .

In North Macedonia, relations with Bulgaria have worsened after the neighbouring country vetoed the start of EU accession talks with North Macedonia citing historical and language issues at the end of 2020. Bulgaria wants North Macedonia to accept that the Macedonian language is a Bulgarian dialect and that Macedonian nation was artificially created in 1944, and to admit that there is no Macedonian minority in Bulgaria. It also insists on the rewriting of history textbooks.

The rift deepened in early March when Bulgarian President Rumen Radev urged the heads of the security services to take measures to protect the rights of Bulgarians abroad who are the target of attacks because of their national identity. This appeared to be targeted at Skopje, as confirmed by Foreign Minister Ekaterina Zakharieva who talked of intimidation of people who are dual citizens of Bulgaria and North Macedonia. North Macedonia’s President Stevo Pendarovski responded that Radev’s move was “contrary to the basic principle in the international policy of non-interference in the internal affairs of another country”.