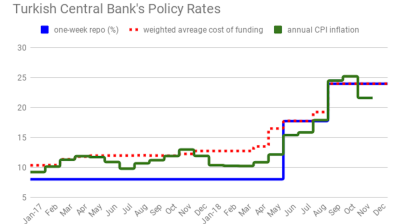 Turkey’s central bank held its policy rate at 24% at its December 13 rate-setters’ meeting as widely expected, but some analysts saw signs that the regulator could go for an interest rate hike as early as a month from now.

The extent of the decline in Turkish inflation in November—it dropped to 21.6% after hitting a 15-year peak of more than 25% in October—surprised the markets and sparked some anxiety that with the local elections coming up on March 31 next year, and with the country seemingly slipping into a recession, irresistible political pressure was building for both monetary and fiscal backsliding.

The Turkish lira (TRY) strengthened as far as 5.3043 against the USD after the rates decision was announced, but it was trading at 5.3453, 0.004% weaker on the day, as of around 16:30 local time. The lira remains around one-third weaker against the dollar in the year to date.

Muhammet Mercan of ING Bank said in a research note: “The USD/TRY has remained in a wide 5.30-5.40 range before and after the [central bank’s] decision. The recent recovery of the currency has caused some optimism on the inflation front, while market pricing based on the short-end of the lira swap curve shows a significant downward adjustment priced in over the current effective funding.

“However, the still-fragile lira, as observed in recent days with a rapid move to close to 5.40 against the USD from slightly above 5.10, likely attributable to some recovery in oil prices, concerns about change in the [central bank’s] tight stance ahead of the December MPC [monetary policy committee] meeting and end of the temporary cut in withholding tax collected from TRY deposits should be a signal for policy makers to be cautious on a premature easing.”

“The lira initially strengthened following the [rates] decision, suggesting that some investors had priced in a small chance of a rate cut, but it has since given up those gains,” Jason Tuvey of Capital Economics said in a research note entitled “Turkish central bank preparing for rate cuts in early 2019”.

“Contemplating rate cuts”
He added: “The statement accompanying today’s decision by Turkey’s central bank to leave policy on hold suggests that the MPC is contemplating rate cuts. With inflation falling back and political pressure on the central bank to lower rates set to build ahead of March’s local elections, we now think it’s more likely than not that policy loosening will begin at the [next MPC meeting to be held on January 16] with a 50bp cut in the one-week repo rate”.

Is Invest was sticking to its view that the first rate cut will arrive as late as the second half of 2019 despite the MPC’s more optimistic but still cautious tone, Muammer Komurcuoglu of the Istanbul-based brokerage told Reuters.

Timothy Ash of Bluebay Asset Management, a devoted lira bull since the beginning of September, was the sole market commentator who perceived the MPC’s tone in its press release on the rates decision as entirely hawkish.

“Solid commentary from the [central bank], promise of further tightening if need be. No mention of possible easing. A good and orthodox response,” Ash said on Twitter.

“Slight change in communication”
Mercan, meanwhile, added that ING’s analysts saw “a slight change in [the MPC’s] communication”. In the latest statement, he noted, the monetary committee said it had decided to maintain its tight policy stance until the inflation outlook displayed “a significant improvement”, while in October the MPC communicated that it would maintain a “tight stance in monetary policy… decisively until the inflation outlook displays a significant improvement”.

The main change from the October statement was that in the latest statement the sentence with “decisively” in it was removed, Mercan wrote.

“It’s difficult to know how to interpret this, but our sense is the MPC is laying the foundations to start loosening policy early next year. Pinning down the timing is not a precise science and much is likely to hinge on moves in the lira. But we think it’s more likely than not that the MPC will deliver the first rate cut at its meeting on 16th January,” Tuvey said.

He added: “At that point, the December inflation figures will have been released which we think will show a further (albeit more modest) fall in the headline rate. The CBRT [Central Bank of the Republic of Turkey] will also be in the process of revising its inflation forecasts ahead of the Inflation Report due to be released at the end of January—it could use a downward revision to its forecasts as justification for lowering rates. And there’s a strong possibility that President [Recep Tayyip] Erdogan puts pressure on the central bank to loosen policy ahead of March’s local elections.”

“Less hawkish tone”
In a research note entitled “The CBT maintains tight monetary policy stance, but with a less hawkish tone...”, Serkan Gonencler of Istanbul-based Seker Invest said: “Although there are slight changes in the accompanying statement, we believe that the [central bank] continues to maintain the tight monetary policy stance, though with a slightly less hawkish tone. Specifically, the lifting of the… “…decisively …” … sentence might be regarded as a rather dovish drift. Nevertheless, the [central bank] also keeps the “…further monetary policy tightening will be delivered, if needed” sentence, which, in our view, implies that any form of a monetary policy easing is not on the cards, at least over the short term. As a sign of the hawkish rhetoric, the [central bank] also states that risks to price stability prevail, although it believes that developments in import prices and domestic demand conditions have led to some improvement in the inflation outlook.”

Gonencler added: “The [central bank] will hold upcoming MPC meetings on 16 Jan and 6 Mar. Until then, we expect it to maintain a ‘wait-and-see’ approach and observe the inflation trend in 1Q, as the favorable impact of ‘tax cuts’ and ‘voluntary price discounts’ [requested of the private sector by the government amid the high inflation] might be reversed in early 2019. Meanwhile, there is no easing in the currency following the decision (as the USD/TRY continues to hover around 5.37), which might be implying that the market is still uneasy about a premature rate cut (e.g., before the March local elections).”

Violent clashes with police at thousands-strong anti-lockdown protest in Belgrade
5 hours ago
Belarus presidential election to have no outside observers, opposition may united by a single candidate
13 hours ago
US intelligence memo admits there is “no evidence” of Russian payment of bounties to Afghans for killing US soldiers
17 hours ago
The bubonic plague has swapped its rats for marmots in Mongolia where two cases reported
21 hours ago
Romania’s Blue Air goes from flying high to seeking debt restructuring
23 hours ago