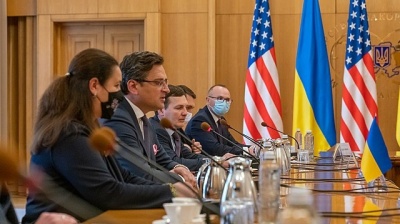 The rejection of one of Russia's core demands comes shortly after Nato ruled out discussions of the principle of the "indivisibility of security". / Image: US Department of State via Wiki Commons.
By Theo Normanton in Moscow February 3, 2022

Ukrainian Foreign Minister Dmitriy Kuleba has ruled out giving the Donbas region a special status in line with Russia’s demands. In an interview with Polish newspaper Rzeczpospolita on Wednesday, he rejected the idea of giving the majority Russian-speaking region a veto over federal government decisions, saying: "No Ukrainian region will have the right to veto decisions affecting the entire country. This is set in stone! There will be no special status like that envisaged by Russia."

This announcement effectively closes off another route to the peaceful de-escalation of tensions on the Russian-Ukrainian border. Russia’s demands for disarmament include a special status for Donbas, a bilateral treaty on European security with Nato (based on the principle of the “indivisibility of security), and a promise from Nato that it will not expand further East.

These demands have been dismissed in turn by the Western allies. Nato and the USA both rejected changes to Nato’s open door membership format for Russia’s sake, while leaked letters from the USA and Nato to Russia show that the latter is unwilling to discuss the “indivisibility of security” – the idea that no state’s security policy should be harmful to the security of other countries.

The delicate peace in the Donbas region is held together by the Minsk Agreements, whereby neither Russia nor Ukraine can deploy forces in the region and Ukraine must restore economic ties and dialogue on the potential for constitutional reform with representatives from the Donetsk People’s Republic and Luhansk People’s Republic.

"We are carrying out a very deep de-centralisation reform, and we are ready to work on the implementation of the Minsk agreements,” said Kuleba. “But the Minsk Agreements begin with security issues. The political aspect is secondary.”

But with Kyiv now officially rejecting a special status for the Donbas, one more avenue to peaceful settlement has been closed, and even more hinges on the talks between senior diplomats and politicians in the coming days.