No FX liquidity crunch yet faced by Turkish banks in wake of lira crisis: Fitch 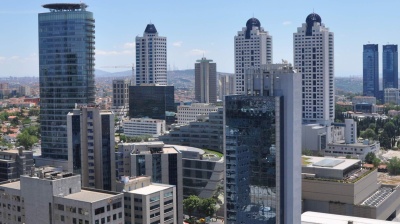 Levent business and financial district in Istanbul.
By Akin Nazli in Belgrade July 16, 2019

“FX deposits increased by 12% in 1Q19, supporting FX liquidity, and banks continue to have access to external funding, albeit at an increased cost. However, maturing foreign debt is sizeable and could be difficult to refinance if investor appetite weakens due to lira volatility, geopolitical tensions or policy uncertainty,” the rating agency warned.

Turkish banks' external debt fell to $161bn at end-1Q19 from $180bn at end-1H18, mainly due to debt repayments and lower rollover rates during tough market conditions.

External debt maturing within 12 months was $91bn at the end of the first quarter but, net of relatively stable sources of funding, refinancing needs were more moderate, with Fitch giving an estimate of $40bn-$45bn.

“This is well within the $89bn of FX liquidity that banks could have accessed, an amount that has increased with deposit dollarisation and, to a lesser extent, FX asset deleveraging. However, a scenario in which banks faced both FX deposit outflows and restricted access to external funding could result in a more rapid tightening of FX liquidity,” Fitch also said.

“However, the external financing requirement will remain large due to private-sector debt repayments,” Fitch underlined.

Fitch estimated Turkey's overall short FX position at end-1Q19 was $167bn. This was significantly less than its net external debt of $239 billion due to the lira component of foreign liabilities and banks' FX derivatives.

Turkish banks' foreign currency liquidity positions were broadly stable in 2Q19 as FX deposits were up by $3bn and lenders retained access to foreign funding markets. External debt numbers for end-June will only be available in late August.

In another observation, Fitch said it believed last week’s firing of the central bank governor by presidential decree on July 6 could jeopardise the inflow of foreign capital needed to meet Turkey's large external financing requirement and make it more challenging for banks to refinance maturing facilities.