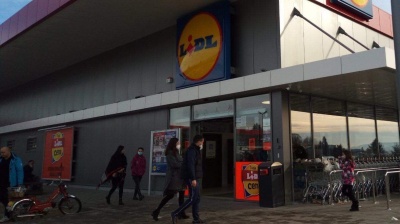 The newly opened Lidl store in the small city of Vranje, in the very south of Serbia, has become a popular destination for day trippers. Tour operators in North Macedonia — whose border is less than 50km from Vranje — are now organising coach trips that include a visit to the popular discount retailer.

German Schwartz Group opened a Lidl store in Vranje, its 31st town in Serbia, on January 14. The opening went ahead despite the pandemic, and the store has drawn crowds since its launch. Serbs, especially those in the south of the country, like Lidl because it reminds them of Greece, the most popular holiday destination for residents of southern Serbia. No holiday to Greece is considered complete without a shopping trip to Lidl, where not only are prices lower than in Serbia but it’s also possible to stock up on groceries like olives, olive oil, sunflower seeds and vanilla pudding.

Besides residents of Vranje, the first Lidl store in the area has become a big draw across the border in North Macedonia, which doesn’t yet have the German discounter chain. The retailer is popular among residents of nearby Kosovo too. These arrivals, eager to spend money in Vranje, brought multiple benefits to the small city that is still feeling the impact of multiple factory closures during the post-socialist transition and now from the coronacrisis too.

One older woman, who says she is already a frequent shopper (mainly because she loves the croissants from the store’s bakery), calls Lidl in Vranje “multi-culti” (multicultural). Asked by a bne IntelliNews reporter if she often sees North Macedonians or Albanians in the store, she says: “They're here all the time, from opening until closing!”

Lidl as a new ‘historic’ sight in Vranje

Tour companies in North Macedonia already offered day trips from cities like Skopje and Kumanovo to Vranje, but they have become much more popular since the opening of the German store.

An ad from Joco Tours, which runs day trips from Kumanovo, went viral as it offered a three-hour stop at Lidl besides visits to some of the city’s more historic sights. After the first excursion on January 23, Joco Tours has been offering the same trip every Saturday. The trip by “tourist bus” — as opposed to the old-style buses with wooden seats used for local journeys in the Balkans — collects the group from Kumanovo at 7am and the group gathers in front of Lidl in Vranje at 5pm to go back. Despite the publicity, Joco Tours has kept the price at a modest MKD350 (€5.68).

When Joco Tours’ ad made the news across Serbia, it left many people wondering why Lidl is so attractive to North Macedonians, bearing in mind that food in North Macedonia is inexpensive. Most of the shops in the neighbouring country are smaller local retailers, though Greek Veropulos and Turkish Ramstore are present on the market.

A middle-aged lady from North Macedonia, who agreed to talk to bne IntelliNews’ reporter, masked and maintaining social distance, said coming to Lidl in Vranje reminded her of visits to the Lidl at the Greek resort of Nea Vrasna. “I came to see if it is the same or not. ... It’s not really as cheap as people believe it is, but in these corona days it’s nice to get a chance to move around, even if it is just to come to Lidl in Vranje! I’ll come again for sure.”

A gentleman, also from North Macedonia, told bne IntelliNews that he came for the promotions. “Regular prices are not lower than anywhere else but products on promotion are. This is why I like Lidl and this is why I will come again. I have a friend here and I call him to find out what’s on sale and then I decide whether to come or not,” he said.

The other incentive in Joco Tours’ ad is “No PCR test needed” as North Macedonians do not need to prove they do not have COVID-19 in order to be admitted to Serbia. Likewise, citizens of Serbia do not need a PCR test to enter North Macedonia. Quarantine is not required on either side.

Geox shoes, “Made in Serbia” underwear and a cup of coffee

Lidl isn’t the only attraction in Vranje. The city is more than eight centuries old, for five of which it was part of the Ottoman Empire, and traces of that period are everywhere. It also has one of the hottest spas in Europe, fed by natural spring water whose temperature can reach 100C. However, the real draw is the cafe culture that attracted tourists even before Lidl opened.

Just like the rest of the country, Vranje has large number of cafes and restaurants, popularly called ‘kafanas’ in Serbia, that are always open and always full of people. Aiming to stop the spread of the coronavirus, in autumn 2020 the government ordered bars and restaurants to shut at 5pm. But it had to backtrack as the crowds just got bigger because everybody ran in at the same time. Over the weekends, cafes and bars in Vranje are full of visitors from North Macedonia.

“If you drive to downtown Vranje at the weekend, you won’t be able to park because cars with Macedonian plates will take all the spots. You also do not want to go shopping because they are in all the shops. You do not want to go and drink your coffee because they are already there, and all the tables are taken. Isn’t that beautiful? Our neighbours come to us, we go to them! We go there to get cigarettes and petrol now but we also go, in normal days, to the gorgeous lakes of Ohrid and Dojran. That’s how it should be. I’m happy they find so many things that they like here, that means we move on, we develop, we improve!” a gentleman who described himself as an “old Vranje citizen” told bne IntelliNews.

“We, as a family, like to come to Vranje once a week. We like to come early in the morning and have breakfast and coffee, then go shopping. I adore Extreme Intimo underwear. It’s a little pricy but it’s phenomenal so I first go there to get my weekly supply. Then we have lunch in one of the local kafanas. Food here is so good for such affordable prices! That lunch sometimes lasts until it’s time for dinner…” laughed a lady from Kumanovo, while standing in line in front of the Extreme Intimo shop in Vranje’s main street. Extreme Intimo is produced by Jasmil, which has been manufacturing cotton products in Arilje, western Serbia, for the last 30 years.

Another excuse to come to Vranje is the Geox factory outlet where the Italian shoe manufacturer — which opened a factory Vranje in January 2016 with a €15.8mn investment — sells off shoes with small faults that can’t be exported to the EU.

“Baba Linda” aka Lidl in Serbia

But Lidl is now the main attraction in Vranje, where it occupies part of the Zona retail park recently built by Czech company Immobalcan, on what has been renamed Prague street.

The German retailer entered the Serbian market in October 2018 when opened it 16 stores at once, of which five were in Belgrade. Announced by Serbian President Aleksandar Vucic as a €205mn investment, the openings were long awaited by thousands of citizens as huge sales were announced. Fights broke out at many of the newly opened stores over frozen chickens on sale for only RSD119.99 (€1).

A video of an older lady from a village near Leskovac, around 100km from Vranje, went viral when she broke into song as she enthused about coming in on the early morning train for the “Linda opening”, a mispronunciation of Lidl. The video went viral and Lidl in Serbia got its affectionate nickname: “baba Linda” (grandma Linda).

Compared to other large retail chains in the country, Lidl still has lower prices; for example, currently Lidl has a promo price for chicken breasts of RSD249.99 while the regular price is RSD329.99. In Maxi, part of Belgium Delhaize, one kilogram of fresh chicken breast costs RSD508.31. In Idea, owned by Croatian Fortenova Group, the same product costs RSD499.

“Baba Linda” in Serbia now employs 2,200 people in its 46 stores throughout the country, where it offers more than 400 products from local vendors.

As in other countries around the world, the pandemic and official measures to restrict movement have resulted in a slump in tourism. But with its new attraction in the form of the German retailer’s latest outlet, Vranje is managing to defy that trend.

The country no longer has a choice, the president says.