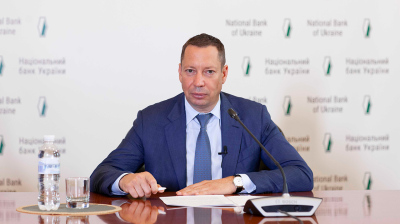 The governor of the National Bank of Ukraine, Kyrylo Shevchenko, said there will be no more IMF money for Ukraine this year after spending a week in Washington in meetings with the fund / wiki
By bne IntelliNews November 14, 2020

Ukraine will not receive its second scheduled International Monetary Fund (IMF) tranche of $700mn before the end of this year, analysts concluded after Governor of the National Bank of Ukraine (NBU) Kyrylo Shevchenko returned from a week of meetings with the multilateral lender in Washington.

Ukraine’s co-operation with its key donor has been de facto suspended since the Constitutional Court of Ukraine (CCU) cancelled key anti-corruption legislation on October 28, including a mandatory electronic income declaration and penalties for lying on the form, effectively decriminalising corruption.

The decision quickly went from scandal to crisis and has left Ukrainian President Volodymyr Zelenskiy scrambling to undo the damage. The president has called for the 15 judges – five of which are already under investigation for corruption – to be sacked and for the anti-corruption laws to be replaced. However, as neither the president nor the parliament have the power to sack or appoint judges on the CCU the whole affair threatens to blow up into a constitutional crisis.

There has been a temporary respite after several of the judges said they were suspending their work due to the scandal, which has effectively closed the court down for the meantime.

And on November 13 it was reported that the court has effectively been shut down by the coronavirus (COVID-19). The majority of the 15-member court is reportedly “either sick or awaiting test results because they have symptoms of coronavirus,” a source told Interfax-Ukraine. One of the judges, Ihor Slidenko, told the news agency: “I am reliably aware of two cases of COVID-19 among judges of the Constitutional Court.”

The IMF is unlikely to restart its $5bn stand-by agreement (SBA) programme, from which Ukraine has already received $2.1bn in June, until the affair is settled and the anti-corruption laws are back in place.

Shevchenko travelled to Washington to meet the IMF this week and made an attempt to rescue the situation; this has obviously failed.

“The National Bank of Ukraine (NBU) has concluded a series of constructive high-level meetings with the International Monetary Fund (IMF) in Washington DC. For the NBU Governor Kyrylo Shevchenko it was the first visit to the IMF since assuming his role in July 2020,” the NBU said in a statement emailed to bne IntelliNews.

“During the meetings, Governor Shevchenko reaffirmed the NBU’s commitment to its independence, as well as the continued implementation of its reform agenda and conditions laid out by the IMF in relation to its current funding to Ukraine. The meetings provided the opportunity to discuss the COVID-19 economic crisis, monetary policy and progress in Ukraine’s financial and anti-corruption reform agenda. The NBU met with senior IMF officials, including Head of the IMF’s Mission in Ukraine, Ivanna Vladkova-Hollar, Executive Director Paul Hilbers and Director of the IMF’s European Department Alfred Kammer,” the NBU added in an attempt to put an upbeat spin on the trip.

But the talks were obviously painful. Shevchenko listed three issues that are being currently discussed between the IMF and the Ukrainian government, including: the decisions of the CCU; the 2021 draft state budget; and the independence of the National Bank.

“If the ways to resolve the issues are being worked out and we are moving ahead from both sides, then I am an optimist – Ukraine has all the chances to host the IMF mission by the end of this year,” Shevchenko said.

That is unlikely to happen before the Christmas break. An IMF assessment team was due in Kyiv over the summer, but failed to come. No team has been in the capital now for eight months and tranches cannot be released until the assessment team has done its work. With only four or five working weeks of the year left it is very unlikely any mission will visit Kyiv until after the long winter break is over at the end of January.

The government still has some wiggle room but its reserves are painfully low. Ukraine’s gross international reserves dropped 1.5% month on month, or $0.4bn, to $26.1bn in October after declining 8.7% m/m in September, the NBU reported on November 6. That is more than the minimum three months of import cover economists say is the minimum a country should have, but the margin is small.

Moreover, up to $10bn in financing from other donors such as the EU and the World Bank are tied to the IMF deal and also won't be released until the IMF signs off on Ukraine’s compliance with its terms.

“This is a sobering statement from the NBU head, which means that not only is an IMF tranche unlikely (or impossible) in 2020, but it's optimistic even to expect this year an IMF mission to discuss the tranche. This is in line with our base-case scenario of no IMF tranche in 2020, meaning IMF-related financing of Ukraine’s 2020 budget deficit (from the fund, the EU and the World Bank) for a total amount of up to $2.5bn won’t arrive this year,” Alexander Paraschiy of Concorde Capital said in a note. “Therefore, the only viable way for Ukraine to try to fill its budget gap without such money is a massive issue of international Eurobonds. As soon as it becomes apparent to the government that no IMF-related money will come soon, it will be high time for Ukraine to prepare for the new bond issue.”