Nazarbayev steps down after three decades as president 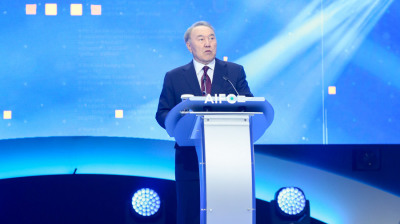 As Nazarbayev officially resigns, the era of former Soviet presidents comes to an end.
By Nizom Khodjayev in Astana March 19, 2019

Kazakhstan’s long-ruling President Nursultan Nazarbayev announced on March 19 that he is stepping down. But it’s not as simple as that, for he won’t truly be giving up power.

The 78-year-old has ruled over Kazakhstan as president for 30 years, and since before the collapse of the Soviet Union. Growing rumours about him preparing to officially step down while maintaining his grip on power have circulated in the country for several months.

In 2010, the parliament voted unanimously to declare him “Leader of the Nation” for life. That move granted him powers to manage the country after his resignation, while last year he was also made the head of Kazakhstan’s Security Council for life. In February, Kazakhstan watchers sat up when Nazarbayev requested that the country's Constitutional Council clarify what powers he would hold on leaving office. He asked for an “official interpretation of paragraph 3 article 42 of the Constitution”.

Surprise televised address
In a surprise televised public address on March 19, Nazarbayev said: "I have decided to terminate my powers as president. This year marks 30 years since I entered the highest position. The people gave me the opportunity to be the first president of the independent Kazakhstan."

He added that the decision was “not easy” but he wanted to assist “a new generation of leaders”.

In line with the Constitution, the powers of Nazarbayev for the remainder of his term will be transferred to the chairman of the Senate of Parliament, Kasym-Zhomart Tokayev, seen as a loyal presidential lieutenant.

Nazarbayev, who will turn 79 in July, took the helm two years before Kazakhstan gained its independence in 1991. In the last election he faced, in 2015, the official result gave him 98% of the vote, although many observers take issue with whether or not elections in Central Asia’s economically dominant nation offer a real choice or are free and fair.

Death of Karimov
The succession question centred on “Leader of the Nation” Nazarbayev gained sharper focus after the death in September 2016 of Uzbek autocrat Islam Karimov, who passed away at the age of 78. He, like Nazarbayev, came to power in his country in 1989.

Political risks stemming from the lack of a clear plan for a successor to Nazarbayev have constrained S&P Global Ratings and Fitch Ratings’ debt ratings on Kazakhstan. It did not help that rumours of Nazarbayev’s deteriorating health have been cropping up in the news nearly every year for several years now.

Though he is officially stepping down, Nazarbayev’s status as “Leader of the Nation” and his control over the national security council will ensure that all the real levers of power will ultimately remain in his hands behind the scenes.

In March 2017, the parliament approved amendments to the country’s constitution to reduce the presidential powers in favour of lawmakers and the cabinet. Some believe the amendments will function to help Nazarbayev's chosen successor obtain power.

Nazarbayev’s daughter Dinara Kulibayeva shares control of the country’s largest bank by assets, Halyk Bank, with her husband Timur Kulibayev, who himself has been seen as the potential next president.

Rumours circulating online among opposition-minded journalists and ordinary Kazakhs have largely focused on Nazarbayev’s great nephew, Samat Abish, the son of Nazarbayev’s nephew Bolat Satybaldy. A youtube channel run by Kazakh opposition journalists in-exile, Aydos Sadykov and Natalia Sadykova, posited earlier today that that the appointment on March 18 of the new prosecutor general, Gizat Nurdauletov, was a move in Abish’s favour. Nurdauletov is supposedly a close associate of Abish’s father. Labelling Abish a “Kazakh Putin”, the Sadykovs argue that Dariga’s and Kulibayev’s clans may not find his candidacy favourable and suggest that Nazarbayev made Karim Massimov as chief of the National Security Committee (KNB) in 2017 in order to guarantee Abish’s smooth transition to the presidency.

That theory echoes that of other analysts who in 2017 wrote that Massimov was given control over the state security services to secure an emulation of the Uzbek succession model. The Uzbek case saw security services head Rustam Inoyatov help bring current Uzbek president Shavkat Mirziyoyev to power following the death of Karimov.

Samat Abish has served as the deputy chief of the KNB since 2015.

The accuracy of the rumours and speculation circulated by Kazakh journalists and experts will be tested in 2020, when the country is scheduled to hold a presidential election.

Nazarbayev’s (un)popularity
Nazarbayev is publicly relinquishing the throne at a time when the country is still deep in conversation about public protests that broke out across Kazakhstan in February as demonstrators complained about quality of life issues facing Kazakh citizens. Ordinary Kazakhs have generally not been able to feel the benefits of the recovering Kazakh economy. The protests, some of which were met with crackdowns, led Nazarbayev to demonstratively sack the Kazakh government, replacing the cabinet with others loyal to him.

The move was accompanied by a statement in which he blamed the cabinet for failing to reduce the Kazakh economy’s over-reliance on commodities exports or improve the livelihoods of Kazakh citizens. The statement claimed the new government would focus on improving the lives of Kazakhs, and social programmes would be implemented to raise the quality of life and support low-income citizens and socially vulnerable groups. Regional development policy would be “drastically” revised, it promised.

Nazarbayev subsequently ordered the Kazakh government on February 27 to tap into the national ‘rainy day’ fund for $3.6bn to boost public sector salaries and social aid and develop housing and infrastructure.

The recent protests did not go unnoticed it seems. The European Parliament issued new resolution on March 14 urging the Kazakh government to "respect human rights and fundamental freedoms".

Kazakhstan has been attempting to diversify its economy away from oil export-dependence in the past year by betting on foreign investment, most of which has come from China. The big opening up of Uzbekistan following the death of Karimov may have also played a role in making Kazakh officials hurry to enact their own investor-friendly reforms and attempt to attract foreign companies.

Karimov’s death left Nazarbayev as the only remaining leader who came to power in the USSR before it collapsed. As Nazarbayev officially resigns, the era of former Soviet presidents comes to an end.