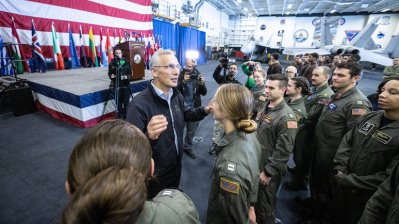 Nato’s secretary general Jens Stoltenberg urged Serbia and Kosovo on November 7 to refrain from any unilateral actions that would trigger an escalation in northern Kosovo.

The message was sent after Stoltenberg held phone conversations with Serbian President Aleksandar Vucic and Kosovo’s PM Albin Kurti following recent tensions in Kosovo sparked by Pristina’s new rules on the replacement of car plates issued by Serbia with Kosovan ones.

“Dialogue is the only way forward,” Stoltenberg said in a tweet, underlying that Nato’s KFOR mission will remain vigilant.

In the meantime, Kosovo’s PM Albin Kurti said that Serbia is clearly interested in sabotaging the dialogue, and accused Belgrade of trying to destabilise Kosovo by supporting Serbs, who decided to abandon state institutions.

"Their path is not one of peace and cooperation, or building good neighbourly relations," Kurti was cited by broadcaster RTK. Kurti also urged Serbs in Kosovo not to boycott the state institutions.

On the other hand, Serbian President Aleksandar Vucic pointed out that Pristina is violating the Brussels Agreement with its unilateral moves, such as the decision on car re-registration and by refusing to allow the formation of the Union of Serbian Municipalities (ZSO), Serbian news agency Tanjug reported.

According to Tanjug, reported KFOR did not deploy additional troops in the north of Kosovo after Serbian policemen left the Kosovan police.

KFOR commander Angelo Ristuccia said he was in contact with Pristina’s authorities and that the KFOR troops remain vigilant and are monitoring the situation on the ground.