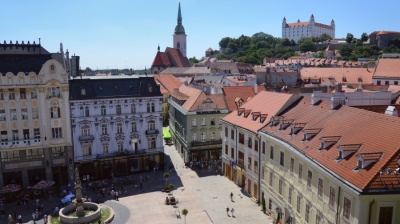 Slovakia saw the region's biggest GDP contraction in Q1 as the car industry was hit by the lockdown.
By bne IntelliNews May 18, 2020

Statistics offices across most of the EU members of Central and Southeast Europe have now released estimates of their Q1 GDP growth, which was badly affected by the coronavirus (COVID-19) pandemic and lockdowns introduced during March.

Of the countries that have released data so far, performance ranges from a contraction of 5.4% q/q in Slovakia to growth of 0.3% q/q in Bulgaria and Romania.

Raiffeisen analysts say that the contractions in GDP in the region are “somewhat less than expected”, as most took a smaller hit than the average 3.8% q/q or 3.2% y/y in the eurozone, with the exception of Slovakia, where GDP slumped by -5.4% q/q.

“The data was slightly more positive for several CEE markets than the analyst’s consensus and we expected. With lockdown measures starting in mid-March for many CEE countries, only Q2 data will show the full effect of the anti-coronavirus measures enforced, and GDP could drop by around 10% or even more in several countries. In Q1 the first two months were still unaffected by the crisis in many countries, while retail sales might have profited from panic buying ahead of the lockdowns,” Raiffeisen analysts wrote.

“April PMI (flash estimates in the euro area already this week) will provide the next information on the economies. For the time being, we maintain our economic projections of recessions in CEE in a range of -4 to -8% for 2020.” 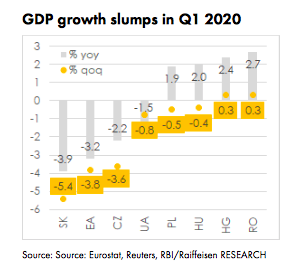 Commenting on the situation in CEE’s worst-hit economy, the Statistical Office of the Slovak Republic wrote on May 15: “The unfavourable economic development is due to the decline in value added in key industries, especially in car production and in several service sectors. External demand made a significant contribution to the decreasing GDP, and the dynamics of its year-on-year decline accelerated. Due to the current situation, the growth of domestic demand is insufficient, with final consumption expenditures in the general government sector growing the most.”

Neighbouring Czechia was also badly affected by the crisis in Q1, reporting the biggest 1Q decrease in GDP since the economic crisis in 2009 at -2.2% y/y and -3.6% q/q.

This was caused mainly by a decrease in external demand and by lower capital formation, shows data released by the Czech Statistics Office (CSO) on May 15. Industrial production saw a record decline of 8.7% y/y in March, while in 1Q20 it decreased by 4.6% y/y.

“Industrial production was heading for a cyclical slowdown already last year and the dynamics did not change much in January and February. However, during March, in response to measures to mitigate the coronavirus outbreak, a number of companies reduced or suspended their production. Therefore, production in the automotive industry fell by more than a quarter and the nearest subcontractor sectors fell by a tenth,” said the chairman of the Czech Statistical Office Marek Rojicek.

In Poland, the performance in quarterly terms was even worse than during the 2008-2009 financial crisis, marking the expected start of a recession with a drop of 0.5%, a flash estimate released by the Central Statistical Office (GUS) on May 15 showed. Meanwhile, GDP grew by a seasonally adjusted 1.6% y/y in the fourth quarter, easing 1.9pp against the adjusted expansion rate recorded in the fourth quarter of 2019.

The reason for the slowdown is clear: the coronavirus pandemic that has kept the Polish economy in lockdown since mid-March. The Law and Justice (PiS) government only began easing some of the restrictions in late April with the process to continue throughout May unless the number of new cases rises again.

GUS does not provide details on the structure of growth but “on the basis of available high-frequency data, we expect a slowdown in both consumption and investment. Net exports, on the other hand, had a positive contribution to GDP growth, although much lower than in [the fourth quarter],” Bank Millennium said in a comment.

“The pandemic will have a destructive impact on the economy in Q2,[as] reflected in our expected GDP decline of 10% y/y, or even more. Indicators point to a sharp collapse in both consumption and investment. On the supply side, a significant reduction in activity applies to both the industry and, above all, the service sector … affected by the effects of social isolation,” the bank added.

“The figures for Q2 will be much worse. Consumer confidence has collapsed in Poland and survey measures point to job losses on a scale not seen before,” said Capital Economics.

The fallout from the lockdown impacted Hungary’s economic performance in Q1, but to a lesser degree than analysts had projected, according to preliminary figures by the Central Statistics Office (KSH) on May 15.

Hungary's annualised Q1 GDP growth slowed 2.2% from 4.5% in the previous quarter, as the coronavirus crisis had a negative impact on most economic sectors in March. Calendar-year adjusted data show GDP rising by 1.8% in the first three months, the slowest growth rate since Q4 2016. On a quarterly basis, GDP contracted 0.4% after a 0.7% increase in Q4. The latter figure was revised down on Friday from 1%. Annual growth in the base period was 5.3% while for the entire last year it came to 4.9%.

The KSH said the lockdown had a negative impact on all sectors, but Hungary’s industry, accounting for a third of GDP remained the engine of growth during the period and market-based services also contributed to growth, albeit at a modest pace.

Despite the shutdown of major car manufacturers, Hungarian industry managed to grow 0.1% in Q1. Hungary’s growth compares favourably to other countries and exceeds the EU average by 5pp and Eurozone growth by 5.6pp, Finance Minister Mihaly Varga commented.

In Southeast Europe, modest growth was reported in q/q terms in both Romania and Bulgaria.

Romania’s GDP increased by 2.4% y/y, in Q1, according to the flash estimate released by the statistics office INS on May 15. The performance, the strongest among EU member states according to Eurostat, encourages the government to continue with the fiscal stimulus and advocate for an accommodating monetary policy as well with the aim of avoiding a technical recession.

Romania's economy needs more fiscal and monetary stimuli to recover in June the ground that it has most likely lost during April and May, Finance Minister Florin Citu said. Citu expressed hopes of avoiding a technical recession.

Bulgaria’s GDP grew by 2.4% y/y in the first quarter of this year, according to a flash estimate from the National Statistical Institute (NSI) released on May 15. However, Bulgaria’s GDP is seen contracting significantly in 2020 due to the coronavirus outbreak, by up to 7%, but is expected to return to growth in 2021.

Russia’s PPI inflation up 1.5% to 28.6% in August
54 minutes ago
Montenegro’s economy posts strong 19% y/y growth in 2Q21, higher than EU average
1 day ago
Russia’s Duma elections statistics: the comet effect and the Moscow blob
3 days ago
Romania and Latvia's car ownership rates among lowest in Europe
3 days ago
Bank lending in Romania gradually returns to retail-driven pre-crisis pattern
3 days ago