Moscow Exchange CEO changed but strategy to remain the same 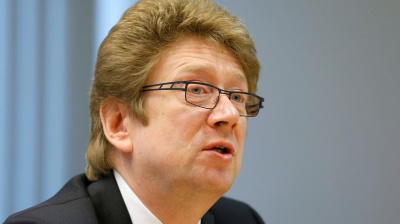 Alexander Afanasiev is stepping down as CEO of the Moscow Exchange
By Ben Aris in Berlin April 17, 2019

The CEO of the Moscow Exchange (MOEX) Alexander Afanasiev has stepped down a year early and will be replaced by Yury Denisov, another capital markets professional, Russia’s biggest bourse announced on April 17.

Afanasiev has led the exchange for seven years and overseen a revolutionary change in Russia’s capital markets, which have some trillion dollars of assets under management.

The biggest change was the merging of the dollar denominated Russia Trading System (RTS) and ruble denominated Moscow Exchange Index (MOEX) into one hosted on the same platform, although the ruble and dollar indexes remain distinct. At the same time the two associated depositories were merged and a single central depository created to clear and settle all trades. Finally, Afanasiev oversaw hooking Russia’s exchanges into the Clearstream and Euroclear international payment and settlements systems, allowing international investors direct access to Russia’s stocks and bonds from dealing desks around the world.

The tie up with the international settlement services had a radical effect on Russia’s financial markets, as billions of dollars flooded into the Russian bond market and today foreigners account for 30% of all the outstanding OFZ treasury bills.

The ease of access for foreign investors also effectively killed off many of the independent investment banks, which used to earn fat fees from trading on the Russian exchanges on their clients' behalf. Stephen Jennings, the former CEO of Renaissance Capital talked about a “killing zone” in between the barbell weights of the really big banks and really small banks, assuming Renaissance was at the big end, only to fall victim in the killing zone himself. Ruben Vadanian’s Troika Dialog was sold to state-owned Sberbank to become its investment arm Sberbank CIB.

Today the Russian stock market plays an important role as a source of funding for the government as it can now increasingly tap international capital by issuing ruble-denominated bonds and thus reduce its exposure to FX risk. That has been a boon and allowed the Ministry of Finance to keep its Eurobond issues, the usual way for emerging market governments to raise international capital, to a minimum.

The markets are also an important source of capital for companies that have raised money to fund their growth. Shoe retailer Obuv Rossii, that caters to Russia’s middle classes living in the regions, raised $105mn with an IPO in October 2017 to fund the ongoing rollout of new stores and has seen its business grow steadily since.

And the domestic exchanges will underpin the development of  Russia’s pension and insurance businesses, which still largely lays ahead of the domestic financial industry.

MOEX' board of directors have proposed Denisov to replace Afanasiev, though the appointment must still be approved by the government. MOEX said the reason for Afanasiev’s departure is he has achieved most of the goals on his agenda ahead of time.

Denisov will take over the company’s new five-year strategy, which he helped draw up, that will be presented in early July. Denisov has over 25 years of experience of working in Russia’s capital markets.

From 2002-10, he was senior vice president and head of Treasury at VTB. In 2010-11, he was deputy CEO at Moscow Exchange. During this time, he was involved in the development of new financial instruments and services, and was responsible for the establishment of a fully-fledged central counterparty and financial risk-management function, as well as the development of the group’s cash management system. Most recently, Denisov has been a member of the supervisory board, from 2008 to 2011 and again from 2013 until the present, reports VTBC.

The markets welcomed Denisov’s appointment, saying he will continue to develop the market, and his long experience of working with MOEX ensures continuity.

“The new five-year strategy is scheduled for presentation in July. As the departing and the new CEO were deeply involved in its preparation, we expect continuity. Our key focus will be on improving operating efficiency and addressing the still negative operating jaws, as well as on capital allocation, including an updated dividend policy,” Svetlana Aslanova of VTB Capital (VTBC) said in a note.