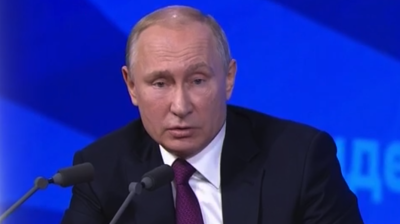 If Putin loses on the battlefield then there is a real chance he will face a palace coup and be ousted. / bne IntelliNews
By Ben Aris September 21, 2022
President Vladimir Putin announced a partial mobilisation in a pre-recorded television announcement on the morning of September 21, upping the ante in the war with Ukraine and bringing a direct conflict between the West and Russia one step closer.
Putin needed to do something. The military campaign in Ukraine had not been going well before Kyiv launched its spectacularly successful counter-offensive two weeks ago, which swept Russian forces out of the Kharikiv region and in the last few days has retaken villages in the Luhansk region too, which had been fully occupied by Russia.
The incursions into Luhansk are a major strategic blow, as the only war goal Putin has set publically is the “liberation” of the Donbas region, which includes Donestsk and Luhansk. Undermanned and with morale low, the war is going badly for Putin. And it is an existential fight for the Russian strongman. If he loses on the battlefield then there is a real chance he will face a palace coup and be ousted.
By declaring a mobilisation Putin has upped the ante and hopes to change the narrative. The practical result is that the armed forces can draw on a pool of 2mn military reservists and solve its manpower problem. But Defence Minister Sergei Shoigu announced the same day that the Kremlin will call up only 300,000 of these men, those with most experience, and groups such as students are exempt.
The decision is an extreme one and carries real political risks. Most Russian back the war, but only passively. Few are actually prepared to go to Ukraine and fight, according to the polls. That is the reason for the partial mobilisation – to keep the numbers down to a manageable level and avoid provoking a political backlash a general mobilisation could cause.
The mobilisation comes one day after the Duma significantly stiffened the punishments for avoiding national service to a maximum 15-year prison sentence, which comes into effect on Wednesday.
The same day, the various Kremlin proxies in Donetsk and Luhansk and other occupied Ukrainian regions announced a snap referendum on seceding from Ukraine and joining the Russian Federation. Those in the Donbas will happen this weekend and the region could be part of Russia by Monday. The other regions, including Kherson, will hold their votes next week.
If Donbas joins Russia then that changes the narrative from a “special military operation” in another country to “protect” Russian citizens living there, to “Nato-backed Ukraine is attacking Russian sovereign territory”.
Under the Russian security manifesto if an attack on Russia is deemed to be an “existential threat” to the country then the Kremlin is authorised to use nuclear weapons. Putin brought exactly this point up during his morning broadcast and added the conclusion: “This is not a bluff.”
Putin usually always means what he says, even if his subordinates constantly lie or prevaricate, and this threat needs to be taken seriously. The remarkable thing with this conflict is that Putin has shown repeatedly that at each stage he is prepared to go to shocking extremes – starting with the invasion itself.
He sees the issue of Ukraine as an existential question of securing Russia’s national security and is prepared to go to any lengths to achieve this. Ironically this means wrecking the Russian economy and undoing almost any material progress he has overseen in the last two decades. It has also united Nato forces against him and driven Sweden and Finland into the arms of Nato. But Putin doesn't seem to care about that. As Ukraine borders the European part of Russia where 80% of the population live, settling the Ukraine status issue has become an idee fixe for the Russian president.
Nato will have to tread more cautiously now, as Putin has laid the groundwork for the claim that the West is indirectly attacking not just Russian soldiers by sending Kyiv powerful weapons, but that the West is now attacking Russian sovereign territory in the Donbas, via its Ukrainian proxy, and that is an act of war by the West.
Will the mobilisation turn the tide of battle in Donbas? It could, but the new recruits will take time to arrive and deploy and in the meantime Kyiv’s soldiers continue to recapture more territory. However, with so much territory still under Russian control it seems unlikely that Ukraine meet its goal of driving Russian forces out of its country before these new reinforcements arrive.
The mobilisation decision shows that Putin will do whatever he thinks it will take to achieve his goals, no matter the cost to Russia, Ukraine or the peoples of either country.