MOSCOW BLOG: Putin backs the FSB in the Calvey case because he needs to 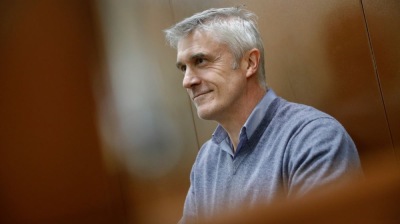 Putin is in a trap of his own making. Russia’s investment community is in furore as the liberal fraction of the Kremlin, that actually runs the macroeconomic and reform processes, called on the president to intercede following the arrest of US fund manager Michael Calvey, Russia’s best known and most successful foreign investor, on February 14.

Hopes that Putin would step in and let Calvey out of jail took a heavy blow this week after a Bloomberg report revealed that Putin backed the Federal Security Service (FSB) investigation in comments made in a private meeting last week.

The case has done yet more damage to Russia’s already tattered investment image and Calvey is almost certainly in prison on trumped up charges that are a result of a shareholders dispute with Baring Vostok Capital Partners’ (BVCP’s) Russian partners in the Orient Express Bank (OEB, aka Vostochniy bank).

And the affair is starting to cost Russia money. As bne IntelliNews reported this morning, international investors withdrew some $130mn from Russian equities last week — the biggest weekly outflow in almost ten years. That outflow probably has more to do with the looming new US sanctions, but clearly Calvey’s case hasn't helped sentiment.

Why is Putin supporting the FSB and why won’t he answer calls by respected liberals and leading fund managers to step in? What is remarkable about this case is the number of leading lights – both Russian and foreign – that have come out very publically and very strongly to call for the Kremlin to do something about Calvey’s incarceration and the charges against him.

This week in an open letter Baring called on Putin to personally step in to oversee the case and ensure there was a thorough and clean investigation. Adding to the growing list of dedicated Russia investment professionals who have put their heads above the parapet in support of Calvey – a decision not lightly made in Russia’s politicised business environment – were Prosperity Capital Management (PCM) founders and managers Matthias Westman and Alexander Branis, who have the same blue-blood pedigree in Russia as Calvey does.

The PCM managers have added their names to the list of VIPs that have come out in support of Calvey including: Russian Fund for Direct Investment (RDIF) chairman and Kremlin insider Kirill Dmitriev, presidential Ombudsman for Business Boris Titov, Sberbank CEO and the most important banker in Russia German Gref, and former finance minister and co-head of the presidential council Alexei Kudrin, who called the case an “emergency” for Russia.

Putin had to back the FSB. This is not the first time Putin has been called on to personally intervene in a high profile case, but he has always taken the line that the courts are independent and the Kremlin can’t interfere in a case even if it wanted to. To act now would be to show that sham up for the lie it is and set a dangerous precedent for the Kremlin. As I have argued elsewhere, Putin has to maintain the myth that the courts work and be seen to let the legal system run its course. If anything is going to be done then after a respectable amount of time has passed some “technical” fix can be found and Calvey could be released.

That’s the hope. If the case goes to trial and Calvey and his colleagues are convicted as charged — they face a possible 10 years in jail — that would be game over for Russia’s chances of ever attracting any serious investor again.

But there is more going on here than just play-acting at the rule of law.

Russia has a hybrid democracy. In elections like those of last March, Putin needs to genuinely win voters over and he was successful last year, taking 77% of the vote. However, there is always some manipulation as not only does Putin need to win, he needs to win by a lot. The Kremlin makes sure not just of a victory, but that it also gets over the various constitutional thresholds. The most important one is to win a clear majority as that gives Putin and the ruling United Russia party clear control of all the Duma committees and de facto complete control of the lawmaking and political process — in other words, complete control of the government machine.

Putin personally needs a big margin as that is the basis of his political power. Putin’s most important constituents are not the people, but the Russian elite.

Putin’s sky-high popularity makes him unassailable and impervious to political attack by the elites. In a regular democracy it would be enough to win the vote in the second round of presidential elections, as looks very likely to happen in Ukraine’s elections at the end of March. But Putin has to win the presidential elections, and convincingly, in the first round. If the race went to a second round then there would be a second pillar of potential political power any would-be opponents could use to attack and oust him.

So Putin has to be careful to nurse his power and his popularity ratings. The population is pissed off by the falling standards of living and Putin’s disapproval ratings have been creeping up – a potentially job-threatening development. He acted decisively in his state of the nation speech this month, offering a cornucopia of social spending programmes to head off rising dissent.

Putin has also been careful to set up rivalries amongst the doyens of state-owned enterprises. There are pairs of powerful companies in most of the strategically important sectors: VTB Bank vs Sberbank, Gazprom vs Rosneft, Sukhoi vs MiG, etc. This is partly a hybrid market model where the commercial competition between ultimately state-owned entities is supposed to engender some element of efficiency. But politically it also ensures no one can build too powerful an empire.

The FSB is a vital part of his system (and is also in competition with the Investigation Committee that reports directly to Putin and is run by his loyal ally Alexander Bastrykin). Putin ran the securities services for president Boris Yeltsin when he first came to Moscow in 1996 and keeps it close as a daunting weapon to deter any potential rivals.

The FSB has been roped into the Calvey case as one of Baring’s Russian partners, Artem Avetisyan, is reportedly close to Dmitry Patrushev, now Russia’s agricultural minister and son of the former head of the FSB Nikolai Patrushev.

Putin is clearly unwilling to simply squash the Calvey case as that would be a serious embarrassment for the security services and undermine its power. He needs to find some face-saving solution that doesn't damage his own standing at the centre of his spider’s web.

This is classic Russia: Russia’s investment image has received yet another bloody nose, but Putin is more concerned about the balance of power amongst the elites. He is trying to play a delicate balancing game of shoring up the supporters that make up his power base before he can do anything to placate the liberal calls to fix a problem that is damaging the country. Putin always choses to prioritise the domestic agenda over Russia’s international reputation in these cases. And that might mean Calvey and his colleagues will have to go to jail.