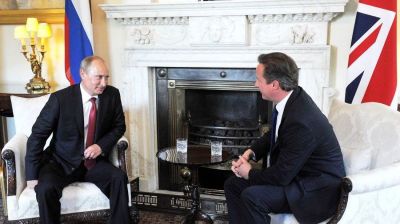 Brexit - a divorce of convenience for Russia?
By Ben Aris in Moscow May 23, 2016

Does Vladimir Putin want the UK to leave the EU? On the face of it, Russia's leader should be pleased by the cracks opening in the EU as his economy struggles to cope under the strain of sanctions, which are hampering trade. Longer term, though, the increasing prickly Putin has said repeatedly that his country's future is in a 'Greater Europe' extending from Lisbon to Vladivostok.

Any such entity is hard to imagine at the moment with tensions so inextricably fraught. Ukraine's new finance minister, Oleksandr Danylyuk, told bne IntelliNews in his first post-appointment interview with the Western press that he doesn't believe relations with Russia and Ukraine can be repaired until after Putin leaves office.

"There will be a future change in power in Russia and the global market – two neighbours can't ignore each other," Danylyuk said during the EBRD's annual general meeting in London on May 12. But many other European countries would like to kiss and make up a lot sooner than that.

The German business lobby is haranguing German Chancellor Angela Merkel to drop sanctions as soon as possible, as they are missing out on fat profits that their Russian subsidiaries were earning: Germany has ten times more companies registered in Russia than its next closest competitors from France and Italy. But Merkel flatly refuses to budge on the issue of sanctions until the Minsk II peace deal for Ukraine is fulfilled as a point of principle. The US is also implacable on the issue of lifting sanctions.

Italy and Hungary, two of the Kremlin's closest allies in Europe, are a lot less committed. Italy said on March 10 that the extension of sanctions on Russia would not be automatic, in the most public sign yet of fraying unity on how to deal with Moscow. "We cannot take for granted any decision at this stage," Italian Foreign Minister Paolo Gentiloni told reporters after a meeting with his EU peers in Brussels, where Russia's EU policy was discussed for the first time in more than a year.

In this context a Brexit would be a huge win for Putin. EU unity is already crumbling, so to remove one of Europe's anchor countries from the alliance facing down the Kremlin would only weaken Brussels' hand further and knock the Russia issue out of focus. The Kremlin has actively been fuelling the discord by financing nationalist groups such as France's National Front leader Marine Le Pen and Britain's UK Independence Party (UKIP) is also suspected of taking the Russian coin. The Kremlin has also stoked the refugee crisis during its Syrian campaign last year, piling up more pressure on Europe. It is actively pursuing a "divide and rule" policy and the task has been made easier by the economic downturn that makes countries more vulnerable to the Kremlin's economic bribes in the form of cheap power stations or lower gas tariffs.

So far, the Kremlin has kept its views quiet on the looming Brexit vote. But on May 18, Putin's spokesman Dmitry Peskov raised his eyebrows about Prime Minister David Cameron's statements that the Russian leader "might be happy" with a British withdrawal from the EU.

"We have already got accustomed to that the Russian factor is one of the persistent tools in the US election campaign. But the use of the Russian factor or the factor of President Putin in the Brexit issue is new for us," Peskov said.

In terms of Kremlin policy toward the issue, Peskov only recalled that Putin has stated many times that Moscow is interested in building a partnership and mutually beneficial relations with the EU countries - both with the Union itself and "individually".

Prima facie it is hard to see how relations between Russia and Ukraine, and by extension with the rest of Europe, can ever be fixed after Russia annexed Crimea in 2014 and piled its resources behind the Donbas separatists shortly after. More than 9,000 people have died in the conflict, according to the UN.

Indeed, despite the recent slight warming of relations between Moscow and Brussels, made easier by the pig's ear that Ukrainian President Petro Poroshenko's administration has made of reforming his country, sanctions will very likely be renewed at the EU summit on June 28 for six more months, as the terms of the Minsk II accord have clearly not been fulfilled by either side.

For its part, the Kremlin clearly wants to get sanctions lifted, as they have come at a high economic cost at a time when oil prices have collapsed, badly wounding the Russian bear.

However, in the long run lifting sanctions should not be an insurmountable problem, provided the Russian economy recovers. If Brexit happens, this will also play to Russia's advantage; it is precisely the loose-but-close relationship the UK would have to seek with the rest of Europe after leaving the EU that Russia is aiming for.

Meanwhile, thanks to the increasing corporatisation of politics, countries are happy to put aside their moral qualms if the potential profits are big enough. This is what allows the US State Department to maintain such close ties with such nasty regimes as Saudi Arabia, Turkey and Uzbekistan, or London with Kazakhstan and Azerbaijan. Even the Queen got caught up in a scandal over Azerbaijan's sponsorship of her 90th birthday celebrations. All of these countries are at least as bad as Russia on a variety of hot-button issues like democratic and media freedoms, human rights, homophobia and so on.

Putin is fixated on the idea of a 'Greater Europe', which has become a bit of a foreign policy trope for him. Putin has said over and over again that, "Europe is Russia's natural partner", starting with the now infamous speech he gave at the Munich Security Council speech in 2007. Russia's current "pivot to the East" is nothing more than a marriage of convenience. Russia and China have never been, and will never be, close friends. For Russia, the overarching concern is not which way Ukraine will go, but the rise of China.

Ukraine is neverthless important, as apart from the emotive 1,000-year old economic and cultural ties Russia wants a buffer zone on its western border. Russia's great military weakness is that the borderlands to the west are flat and fertile, which has allowed invading armies to always just walk into the country.

But the much bigger problem is Russia has a much longer border with China that stretches a tenth of the world's circumference. And the Chinese economy is growing extremely fast. Russia accounts for about 3.6% of global GDP despite being the ninth largest economy on the planet. China has already overtaken the US to become the biggest economy in the world with 16.32% of global GDP and a PwC report last year predicted China's share of the global economy will peak at 20% in 2050, while the EU's share will fall from the current 33% to 25%.

If Russia were to tie up with Europe, then it would be part of a mega-bloc that accounts for nearly a third of global GDP. If it doesn't, it will become little more than a raw materials appendage to the rest of the world.

Putin has plenty of time to put this plan into operation. The beauty of debasing the democratic process at home is that he has freed himself from the need to act quickly and decisively as per four-year Western election cycles. And if a week is a long time in politics, then Putin's ongoing succession of terms backed by a staunchly loyal electorate is akin to a geological age.

However, all this only works if Russia Inc is a viable concern and there is money on the table. No one will be willing to make a deal with Russia unless there is a payoff. At its peak, just the Russian consumer market was worth more than $660bn – seven times the size of the entire Ukrainian economy, a fact that Russia's European business partners are well aware of – and was the biggest consumer market in Europe in many product groups.

With the collapse of oil prices and Putin's adaptation of the 'state capture' model – where corruption is the system and power is derived from handing out freebies to a small inner circle of economical powerful buddies – there is a big question mark hanging over Russia's future prosperity. The country is rapidly sliding from recession to Latin America-style stagnation and that makes Putin's system inherently unstable. If that happens, then it doesn't matter if the UK leaves the EU or not – Russia will have made itself irrelevant to the rest of the continent, except as that raw material appendage.