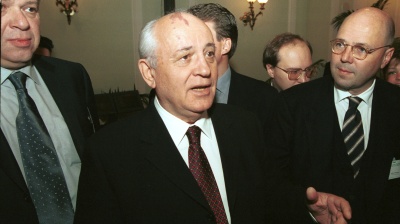 Mikhail Gorbachev died at the age of 91 but his legacy and mistakes still colour Russia's fate today / bne IntelliNews
By Ben Aris in Berlin August 31, 2022

I met Mikhail Gorbachev only once at a Renaissance Capital investment conference in the heart of Moscow in 2004, but it was a captivating experience. He was surrounded by a gaggle of investment bankers, who were fidgeting with excitement, as it was the financiers' equivalent of meeting a rock star, and was holding forth on the changes that still needed to be made to the Russian economy.

He had that magnetic charisma that most successful politicians possess. When he turned to talk to me you felt that hypnotic power that makes you feel you are the only person on the planet while he was talking. He cut a jolly and slightly chubby figure that didn’t seem to quite fit on the TV reports from the 1980s I watched as a child and was set in relief by his glamourous wife Raisa, whom he clearly loved with a passion. But up close you quickly understood how he had become the supreme leader of one of the world’s two superpowers.

The setting was telling. Rencap was one of the leading and Western-owned investment banks in the country at the time and a boom had clearly started. Oil prices were starting to climb, and the stock market was increasing by half every year. Investors were flooding into Moscow as the story became increasingly exciting. Money was being made by everyone. Gorby was basking in the limelight, as his failure to transform the Soviet Union gradually didn’t seem like such a bad mistake any more. As my picture from that day shows, he was still youthful, a bundle of energy and happily engaging with all the bankers around him.

Russian President Vladimir Putin was just about to be re-elected for his second term and while he had arrested oligarch-turned-dissident Mikhail Khodorkovsky the previous autumn, setting in motion his demonetisation by the international press, the investors were a lot more sanguine. Bankers care little about democracy and the freedom of speech and a lot more about an open capital account, ROIs and the ongoing privatisation process, and Russia had all of that.

Of course, Gorby has left a mixed legacy. The Russian people remain ambivalent about his role and the collapse of the Soviet Union, which brought to an end their superpower status – a deeply humiliating event for most Russians. However, Boris Yeltsin took the blame for the pain of the 1990s and Gorby remained a critic of the changes under way at the time and since. He also never stopped being a Party apparatchik even if he did succumb to the realities of modern Russia by famously appearing in adverts for Pizza Hut and Louis Vuitton luggage. A friend of mine sold his apartment for him a few years later that netted him several million dollars. She has a picture of herself posing with her children standing next to Gorby in a luxurious apartment on Romansky Pereulok, one block away from the Kremlin.

His place in history also remains confused and continues to have an impact on politics today. One of the most significant events of his career was a series of meetings he had in February 1990 with German Chancellor Helmut Kohl, US Secretary of State James Baker and several other top Western leaders where he was promised that Nato would not expand “one inch” to the east.

The verbal promises made to Gorbachev then by multiple Western leaders are now a matter of historical record after the meetings from that month were declassified several years ago, but oddly Gorbachev himself has denied they were made in at least one interview in the Russian press. I never understood this, and I can only ascribe it to embarrassment, as they were only verbal promises and so carry no weight in diplomacy. He should have asked for them in writing and accepting a spoken promise in retrospect seems naïve now.

These promises have remained an issue as they have formed the basis for Putin’s drive to get them in writing that were at the core of the January diplomacy this year with the US ahead of the war in Ukraine. Putin brought them up multiple times and the core of his demands on Washington during the first round of meetings in Switzerland was for “legally binding guarantees” that Ukraine would never join Nato, as he tried to undo Gorby’s mistake.

However, the even more profound effect that Gorby had on Putin was the failure of perestroika to transform Russia into a modernised version of the Worker’s Paradise.

In a little remembered speech from early in his first term Putin addressed Gorby’s reforms directly and said that his mistake was to put the political reforms ahead of the economic reforms. Putin watched from the sidelines as that political liberalisation quickly ran out of control. Protests sapped the Party of its power, leading to chaos and the collapse of the Soviet Union, the “greatest geopolitical tragedy of the twentieth century,” as Putin so famously said.

Poorly remembered now, the beginning of the end started with demonstrations in Riga in 1986, quickly followed by Estonia, where thousands took to the streets to protest against pollution. The Party allowed these demonstrations to happen, as it didn’t regard environmental issues as “political,” but they quickly became political. By 1988 the protests had formed into an organised reform wing that brought back the Estonia language by 1989 and similar legislation was passed in Lithuania and Latvia shortly afterwards. Estonia called for its re-establishment as a sovereign nation in 1988 and the other two demanded the same a year later. The demonstrations became very large with 2mn people joining hands to link the three capitals in 1989. Gorby dithered over sending in the troops.

The end of the Soviet Union began with Lithuania declaring its independence in March 1990 and Latvia in May 1990. At this point Gorby intervened and sent in the troops, resulting in “Vilnius massacre" and "The Barricades” in the two countries in January 1991. But it was already too late. Estonia broke away and declared independence in August 1991 just before Gorby went on that fateful summer holiday in his dacha. By December the president of Russia, Boris Yeltsin, was in Brest in Belarus with his counterparts Ukraine’s Leonid Kravchuk and Belarus’ Stanislav Shushkevich to sign the Soviet Union into the dustbin of history. Gorbachev became the leader of a Union that no longer existed, and power transferred inexorably to Yeltsin. On Christmas Day in 1991 Gorby completed the process, signing himself out of power.

All of this has had a huge impact on Putin. In his second and third terms he presided over a transformation that saw Russia’s economy double in size and lifted the average man out of poverty and created a middle class with an income on a par with the lower end of the EU.

While Putin is mostly remembered now for his jailing of Khodorkovsky in 2003, at the time as bne IntelliNews reported, there were two Putins: the “Political Putin” that was even then showing authoritarian traits as he dealt harshly with oligarchs that dared to openly oppose him, and the “Economic Putin” that completely rewrote the labour code, introduced a radical flat tax system and put Russia’s finances on a solid footing for the first time since 1991.

With Putin the pendulum has swung too far in the other direction. His economic reforms have been a huge success. He also dealt effectively with Russia’s demographic crisis as bne IntelliNews featured in Putin’s babies, which was his top priority from day one in the job as president.

But Putin has always been interested in making Russia “great” again, rather than just “prosperous”, and resents the loss of superpower status as keenly as the rest of the population. More importantly, Russia lost its Cold War security guarantees that its superpower status came with following the US’ decision to unilaterally withdraw from the ABM missile treaty in 2002 that started with Gorby’s failures.

As Putin worked towards re-establishing Russia’s place at the top table and a “no Nato” guarantee from Ukraine, Putin has also ratcheted up his intolerance of the protests that brought Gorby down. He went into full repression mode in January 2021 after the return and arrest of opposition anti-corruption activist Alexei Navalny. And now he has gone to war with Ukraine and definitively broken with the West to achieve these goals. For Gorbachev this must have been a bitter moment, but tellingly he supported the annexation of the Crimea and has not spoken out against Putin’s invasion of Ukraine, even if he made it clear he never approved of Putin’s rule.

Gorbachev died at the age of 91 in the afternoon of August 30 in a Moscow hospital after a long battle with a “serious illness.”

"Mikhail Gorbachev passed away tonight after a serious and protracted disease," said Russia's Central Clinical Hospital in a statement.

Putin expressed "his deepest condolences", Kremlin spokesman Dmitry Peskov told Interfax. "Tomorrow he will send a telegram of condolences to his family and friends," he said.

World leaders were quick to pay tribute. European Commission chief Ursula von der Leyen said Gorbachev, who was awarded the Nobel Peace Prize in 1990, had opened the way for a free Europe.

US President Joe Biden said he had believed in "glasnost and perestroika – openness and restructuring – not as mere slogans, but as the path forward for the people of the Soviet Union after so many years of isolation and deprivation,” Reuters reports.