It was easily the most anticipated retail event of the year. After eight years of renovation, the Soviet-era shopping legend reopened its doors to the public on March 31. Detski Mir (Children's World) is the largest toy store in Europe and every Russian kid's dream – Santa's Grotto merged with the Hansel and Gretel witch's house, covered in powdered sugar and wrapped in golden paper with a huge bow on top.

The store has a special place in the hearts of Russians since it opened in 1957. During the shortages of the Brezhnev-era, the queue around the enormous building that stands on Lubyanka square in central Moscow could wind around the building up to eight times. Parents would literally stand for days in the queue to get something special for their children.

In the early days of Boris Yeltsin's Russia the store was a magnet for the first rash of ambitious traders and the obvious premium retail forum in Moscow to showcase the latest imported wares. In 1993 Cadillacs and Humvees stood incongruously in the main hall between the shelves of teddy bears and Christmas baubles, supplied by Trinity Motors, one of the first companies set up by David Iakobachvili and his partners, who went on to found the juice and dairy giant Wimm-Bill-Dann that was sold to Pepsi Co for a reported $3.8bn in 2010.

Even during the chaos and hardship of economic collapse and hyperinflation of the 1990s Detski Mir always felt like a refuge from the storm, with wide-eyed children wandering the aisles that were overflowing with delights, clutching the distinctive and much loved Soviet-era ice cream in a waffle cup.

The ice cream cups were back for the grand reopening of the store on March 31, handed out for free by the same white-coated babushki that have always held this job. A select audience were let in early to listen to speeches from Moscow's all-powerful mayor, Sergei Sobyanin, and the CEO of VTB Group, Andrei Kostin, whose bank took over ownership of the store after the previous owner Sistema Hals went bust in the 2008 crisis.

"Crises come and go, but we will always have our children and we do more for them than anyone else in the world," said Kostin, who has at least five children of his own and was surrounded by a crowd of kids that rushed forward at the appointed time to press a big white bottom to start the famous Detski World clock on the back wall of the main foyer.

The building is beautiful. It has more than 100 shop fronts in the alcoves of the seven tiers spread over 73,000 square metres that rise around the central atrium. This is topped by a spectacular domed glass roof painted with famous scenes from the iconic woodcuts by Ivan Bilibin – the Slavic Beatrix Potter, whose images of the witch Baba Yaga or Prince Sadko are as familiar to Russian children as Peter Rabbit and Jemima Puddleduck are to British kids.

The store has had a roller coaster ride. The Detski Mir brand was taken over by the AFK Sistema conglomerate in 1996 during the boom years and turned into a brand. But the main store came a cropper in the 2008 crisis when the conglomerate's real estate development arm, Sistema Hals, went bust and had to pass ownership of the flagship store to the state-owned VTB, its major creditor. By that time the store had already been shuttered for a major renovation, which stood still for the best part of the last six years until new financing of RUB8bn ($137m) could be put in place to complete the work.

The store caused a minor scandal in the run-up to its relaunch with a controversial advertising campaign. The adverts featured two children harshly interrogating their parents and ordering them to take them to Lubyanka – a play on the association with the square's other resident, the headquarters of the Russia's Federal Security Services (FSB, the successor to the KGB). 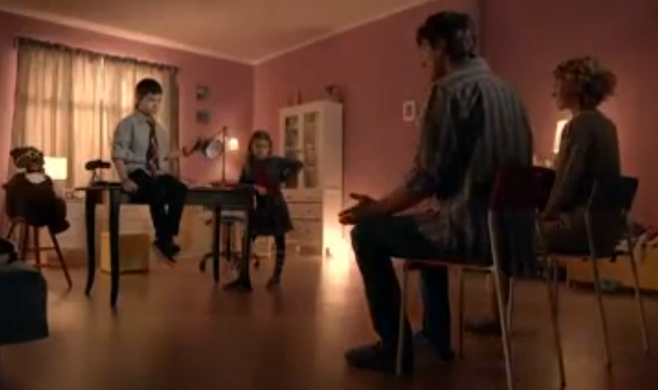 The prison on the square was made famous in the 1930s "Red Terror", when Stalin's victims were taken to the ornate building that dominates the square and disappeared into its basement cells, most never to be seen again.

Initially, three segments (one with the boy wielding a hammer) were uploaded to YouTube in an attempt to produce a viral marketing campaign. The segment closes with the logo for the reopening of the Detski Mir store. However, it appears the campaign backfired, going a little too close to the bone for comfort.

The store has a mixed outlook. It reopens at a time when Russia is sliding into a period of economic stagnation that could last five years, former finance minster Alexei Kudrin said on the same day at a separate event. But Detski Mir's saving grace is that it sells toys – a segment that has been consistently a top retail performer in recent years.

Still the market is tough. The slump in Russia's retail trade intensified in the first months of this year, as trade volume contracted 4.5% on year in January and 7.7% in February – the worst result since 2009. Both food and non-food sales performed rather poorly, with non-food sales falling by 3.5% on year, down from a 10.5% year-on-year increase a month earlier during panic buying and the holiday season.

The outlook for retail in 2015 remains poor as real wages fall for the first time since Vladimir Putin came on the scene. Retail turnover declined 9.9% on year in February and 9.1% in the first two months after real disposable incomes contracted by 0.6% on year in February and 0.8% in January after shrinking 6.2% in December. Uralsib expects a steep 8.2% contraction in real incomes in 2015 and the New Economic School also says real wages growth is likely to stay in negative territory for 2015, averaging around -6% during the year. This marks the weakest period for wages growth since the early noughties.

However, in 2014 Russia became the largest market for toys and children's products in Europe, and the market has been growing in double digits for nearly a decade. Marketing surveys have found that Russians may cut quality corners on their food and clothes, but rarely in goods for their children.

Toys are probably the most promising of all the retail subsectors; the market expanded by 76% between 2009 and 2014, driven by the import of French and German products. Moscow takes a huge 25% share of all sales catering to the country's 22mn children under the age of 14, says marketing agency PMR's Katarzyna Twardzik.

The value of Russia's children's goods market should have overtaken that of Germany in 2014, formerly the biggest market in Europe, to reach $11.3bn, according to the RBC Market Research consultancy, if it were not for the Ukraine crisis-related sanctions. By contrast, Germany posted $10.5bn of sales in 2009, but the toy market is only growing by a compound annual growth rate (CAGR) of 1.5%, while the UK market grew by 2.5% in the same period, and both Italy and Spain were in decline last year, with -0.5% and -4.2% respectively. In Russia, toy sales have been growing at a CAGR of about 11% in recently years and the Detski Mir brand has been growing twice as fast as the rest of the sector, according to Sistema.

Poor demand and empty pockets have already impacted bottom lines. Corporate profits as a whole were down 10% in 2014, but surprisingly Rosstat reports that the major retailers saw sales fall but mostly remain in profit.

Sistema launched a chain of some 300 stores across the country on the back of the fame of the main one on Lubyanka. And sales there have been strong despite the crisis, with revenues in 2014 on the order of RUB30bn (around $1bn at then exchange rates), up by a quarter on the previous year. The challenge for the company now is to source more toys in Russia, as only 17% of the products in its stores last year were domestically produced.

Despite the torpid retail market, the new Central Detski Mir store had no shortage of tenants. Hamley's, which owns the largest toy store in the UK on Regent's Street, took the anchor slot on the first and second floors, and has been actively investing into Russia. Other key tenants include Mothercare (which failed to have its main store ready in time for the grand opening), as well as a host of smaller stores belonging to most of the well-known European children's goods purveyors, but notably relatively few Russian ones.