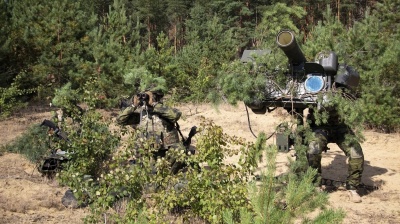 The Czech government has approved the sending of up to 650 soldiers to Slovakia. This decision needs to be approved also by the parliament.

"I am confident that the mandate will be approved as soon as possible. In light of [Russian President Vladimir] Putin's unprecedented invasion of Ukraine, there is no time for delays. We want to help our Slovak partners to build a battlegroup, which we would also command, as soon as possible," said Czech Defence Minister Jana Cernochova.

Most of the soldiers will serve with a multinational Nato unit in Slovakia which will be led by the Czech Army. The mandate will be valid until June 30, 2023, and the cost is estimated at around CZK540mn (€21.3mn). The soldiers will also Slovakia handle the refugee wave from Ukraine.

The detachment of Czech soldiers will also set up a camp to shelter 400 Ukrainian refugees near Liptovsky Mikulas in the Zilina region, the Czech Army added on Twitter.

The creation of the battle group (up to 2,000 soldiers) in Slovakia is part of Nato´s efforts to strengthen its Eastern Flank. If Ukraine were also to become a satellite of Moscow, this would then also make Nato members Slovakia, Hungary and Romania frontline states.

Poland, Slovenia and the US are also expected to join the Slovak battlegroup, while Germany and the Netherlands have promised to provide air defence, including the sending of the Patriot system.

Similar units should also be set up in Western Hungary, Romania and Bulgaria.

The decision to station Nato troops has been controversial in Slovakia but has been made more palatable by the battlegroup being led by the Czech Republic, a country that Slovakia maintains strong ties with since the division of Czechoslakia in 1993.

The Slovak government also okayed the strengthening of Nato's forward presence in Slovakia on March 9. The proposal still needs to be approved by the Slovak parliament.

"The aim is to demonstrate cohesion and declare readiness to defend jointly against any threat. Nato member states are also confirming via this activity that a possible attack on one member will be considered an attack on all," said spokeswoman for the Slovak Defence Ministry Martina Koval Kakascikova, as quoted by the Slovak News Agency.

"I believe that the current reality that Russia has created for the whole world by its aggression towards a sovereign state without any pretext will be sufficient reason ... because it has grossly violated international law and is attacking civilian targets – these are facts. Therefore, I sincerely hope that the proposal to strengthen the security of our territory and the population alongside the Allies will receive clear support across parliament," said Defence Minister Jaroslav Nad.

Slovak Prime Minister Eduard Heger said it's necessary to reinforce the entire Europe and not just the Eastern Flank of Nato, following the summit of Central European countries and Great Britain in London this week.

However, earlier this month the Slovak government rejected Poland's proposal that Bratislava should send its ageing MiG-29 fighter jets to Ukraine. Slovakia is in the process of replacing these fighters with US-made F-16 jets, which are due to arrive in 2023, but it needs to keep them to protect its airspace until then. The US has also rejected the proposal as it said it risked dragging Nato into the Ukraine conflict.

Opinion polls have shown that the Slovak public is swinging behind Ukraine and against Russia, and is more amenable to the stationing of foreign troops on its soil.

Before, three quarters of Slovaks (74.1%) believed the US and Nato were responsible for the increasing tension between Ukraine and Russia and more than 50% of citizens considered Russia a strategic partner; now half of the population would agree to station Nato troops in the country, 61% of Slovaks believe that Slovakia's membership in Nato is a good thing for their country, and more than 77% of Slovaks see Russia's actions in Ukraine as an act of aggression.

Slovaks are traditionally among the most sympathetic to Russia in the region, and the least enthusiastic about Nato membership. This is partly a product of the rapid industrialisation carried out in the country during the Communist period as well as the longstanding tradition of pan-Slavism.

Leftwing opposition parties have also started to shift their positions. According to former prime minister Peter Pellegrini, his party Voice-SD will agree with the presence of Nato troops in Slovakia “if they are not tasked with attacking, but protecting a Nato member state, and thus the whole of Nato".

"We are in Nato, we share our rights and duties," he noted, adding that Slovakia needs to increase the country's defence expenditure.