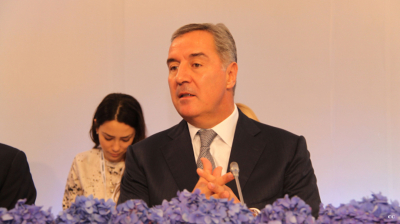 Milo Djukanovic has been either Montenegro's president or prime minister for most of the last three decades.
By Denitsa Koseva in Sofia March 24, 2021

Abazovic is part of the new government led by Prime Minister Zdravko Krivokapic that came to power in December 2020, ending 30 years of rule by Djukanovic’s Democratic Party of Socialists.

Krivokapic’s government has set fighting top level corruption as its priority, and has already revealed several cases involving former politicians. However, the government’s efforts to remove Katnic earned it criticism from the EU, and it later backed down.

In an interview with Euronews, Abazovic said Katnic is blocking at least four corruption probes involving the president, though he gave no further details.

Abazovic claimed that the four corruption cases are “on Katnic’s desk” but he has not opened them, and that there might be future corruption investigations that could also involve Djukanovic.

The politician told Euronews that fighting corruption is not possible with the current prosecutor and urged European lawmakers not to tie the new government’s hands as it attempts to undo three decades of the DPS' rule in Montenegro.

Corruption is undoubtedly a problem in Montenegro; the European Commission’s latest progress report on the EU candidate country stated that: “Corruption remains prevalent in many areas and a serious concern. There is a need for strong political will to effectively address this issue of concern, as well as a robust criminal justice response to high-level corruption.” The report adds that Montenegro “still needs to address some fundamental and systemic deficiencies in its criminal justice system, including the way organised crime cases are handled in the courts”.

The new government has pledged to tackle corruption, but its efforts to remove Katnic have raised concerns in Brussels. Katnic led the investigation into the failed 2016 coup plot that resulted in prison sentences for two leaders of the Democratic Front, one of the main parties in the new ruling coalition. Following the change of government, the sentences were overturned.

“[It is] not because we don’t like [Katnic] or we don’t like the concept of the specialist prosecutor but because we need new management of that institution if we want to deliver results. With the same person, we cannot deliver the result,” Abazovic said as quoted by Euronews.

He added that the government needs people who "have the courage to start over".

Djukanovic has ruled Montenegro for most of the last 30 years, serving as either president or prime minister except for brief periods when he stepped out of politics, and he has always pushed for the small country’s integration in EU and Nato. Although there were many rumours that he has been involved in corruption, so far no investigation has been launched.

However, the new ruling coalition has repeatedly said that would probe anyone regardless of his post if it finds evidence of possible corruption or any other crime. It has already launched several such investigations.

Among other former top politicians, ex-interior minister Mevludin Nuhodzic was named in connection to an investigation into the procurement of border monitoring equipment. In February, Abazovic revealed that the borders with Albania and Croatia are not well protected following alleged fraud in a deal to buy equipment including radar and cameras for border monitoring.

Under Nuhodzic, the ministry acquired border monitoring equipment that was much cheaper than what had been agreed, which led to the embezzlement of over €1mn from a EU grant, Abazovic said. According to the deputy prime minister, the equipment has not worked for more than a year and a half, leaving the borders unprotected.