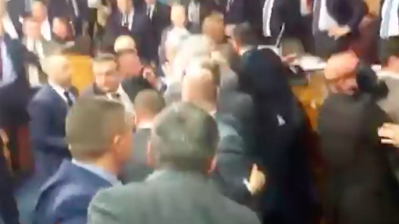 Montenegrin MPs brawl over the new church law. There were similar scenes in the Serbian parliament.
By Denitsa Koseva in Sofia January 5, 2020

A controversial law on religion adopted by the Montenegrin parliament at the end of December has led to numerous protests in the country and in neighbouring Serbia, and mounting tensions between the two countries.

Late in the night on December 27, the Montenegrin parliament passed a bill that, according to its critics, may strip the Serbian Orthodox Church of hundreds of religious sites in Montenegro, including medieval monasteries and churches. The following day, the bill was signed into law by President Milo Djukanovic.

Under the new law, religious communities can only retain ownership of their property if they can show clear evidence that it belongs to them. Otherwise, their property is to become state-owned. This has led to numerous accusations from the Serbian Orthodox Church that the government plans to ‘steal’ many of its holdings.

The government had adopted the bill on religious freedom back in November, and the debates ahead of the law’s adoption were accompanied by protests in Montenegro’s capital Podgorica and in the town of Niksic, which were backed by the opposition Democratic Front, a union of parties that are pro-Serbian and pro-Russian.

The party’s lawmakers created chaos in Montenegro's parliament when they attempted to block the vote, hurling what appeared to be either a tear gas canister or a firecracker ,and also attempting to destroy microphones in the parliament. 22 Democratic Front MPs were arrested.

The Democratic Front is already a controversial force in Montenegrin politics because of its role in a failed 2016 coup plot also involving Serbian paramilitaries and members of the Russian security services.

Following the law’s adoption, protests outside the parliament also turned violent with clashes between the police and protesters, while in the Serbian capital Belgrade several hundred gathered in front of Montenegro’s embassy and attempted to set the Montenegrin flag on fire as reported by vijesti.me.

A fight also broke out in the Serbian parliament when two opposition lawmakers paraded through the chamber carrying banners criticising the authorities for failing to take action.

On January 4, Serbia’s President Aleksandar Vucic cancelled a private visit to Montenegro because of concerns Montenegrin officials might claim his presence fuelled ethnic tensions and jeopardised the country's independence.

A separate Montenegrin Orthodox Church was set up in 1993 but has not been recognised by other Orthodox Christian communities to date. The local branch of the Serbian Orthodox Church controls most holy sites, some of which are popular for tourists and bring significant revenue.

Vucic was supposed to visit Montenegro for the celebration of Orthodox Christmas on January 7.

“I took this decision as I am certain this would provoke clashes and I do not want clashes. Because I know that some [people] would use this to harm the Serb people in Montenegro,” Vucic said.

Meanwhile, the Serb member of the tripartite presidency in neighbouring Bosnia & Herzegovina, Milorad Dodik, has backed the Serbian Orthodox Church’s demands for the law’s cancellation, saying that it is usurping its rights in Montenegro. The Russian Orthodox Church has also objected to  the law’s adoption.