Moldova’s pro-Russian president might have his own government soon, poll shows 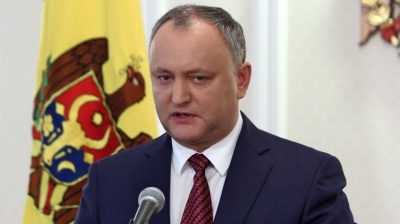 By Iulian Ernst in Bucharest February 6, 2019

The Socialist Party (PSRM) of Moldova’s pro-Russian President Igor Dodon might form a fragile majority in parliament after the February 24 elections, according to a poll conducted by the International Republican Institute (IRI).

The IRI poll shows the PSRM taking 39% of the votes plus another 13pp from the re-distribution of votes given to small parties that fail to meet the electoral threshold. However, the complex electoral process, under which half of the lawmakers are elected through a majority vote and the other half through a proportional vote, might result in surprises.

But assuming the IRI poll is confirmed by the outcome of the elections, the PSRM and three other parties will have lawmakers in parliament. Two of these are the pro-EU opposition parties Action and Solidarity (PAS) of Maia Sandu and Dignity and Truth (PPDA) of Andrei Nastase, who have already formed an electoral alliance. Altogether, they would get 22% of the votes, compared to 39% for the PSRM.

The incumbent ruling party, the Democratic Party of Vlad Plahotniuc, would get 14% of the votes, according to the IRI poll. While it vocally declares itself to be a pro-EU party, the PD is more likely to ally itself Dodon’s PSRM. Such a coalition has been forecast for years, with only the balance of powers remaining to be decided by at the polling stations. The poll indicates Plahotniuc will have to accept Dodon’s victory and this might result in significant changes within the informal structures of the state. This will keep Moldova in limbo, since Dodon has no real plan to dramatically change the country’s orientation to Russia, but the progress towards the far off prospect of accession to the European Union will predictably slow down.

The alternative to a PSRM-PD ruling coalition is a major political crisis, since the chances of the reformist, pro-EU PPDA and PAS winning a majority, even fragile, are slim. Under such a scenario, without firm support from the EU, they will most likely fail to survive the attacks of the Democratic Party, which controls the whole administration.

Hungary’s most powerful oligarch says he is just a lightning rod for attacks on Orban
4 hours ago
US sanctions on Russia’s OFZ local debt come into force
4 hours ago
Moscow back on lockdown as coronavirus infection rate surges again
11 hours ago
Lukashenko pushing illegal Iraqi refugees over the border into Lithuania
11 hours ago
Belarus is the “North Korea” of Europe, says US diplomat
3 days ago