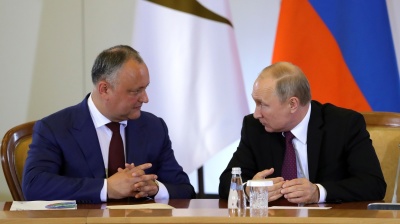 Russian President Vladimir Putin (right) with his Moldova counterpart Igor Dodon in Sochi in 2018.
By Iulian Ernst in Bucharest July 30, 2020

Moldovan President Igor Dodon has signed a decree on the creation of a Commission for Constitutional Reform.

Recently, the Moldovan ambassador to Moscow, Andrei Neguta, said that the Chisinau authorities are already studying the experience of the Russian Federation in amending its constitution.

"We are trying to understand what is possible in the conditions of the political system of Moldova, this is important for us as well. We are also discussing what should be changed in our constitution,” the diplomat underlined.

The subject was discussed by Dodon during a meeting of the head of state with Victor Puscas and Dumitru Pulbere, the ex-presidents of the Constitutional Court.

Dodon outlined several issues that in his view require the creation of the commission. Among them are the “constitutional deadlocks” from 2014-2020 in the president-government-parliament relations. The parliament repeatedly suspended Dodon from his post to pass laws Dodon objected to. Dodon also mentioned the problem of MPs moving from one party to another. His government recently lost its majority in parliament after Democrat MPs pulled out of the party to join the opposition.

The Moldovan president wants the constitution to “include provisions on the balanced foreign policy of the Moldovan state” and ban “public initiatives regarding the opportunity to exclude from the constitution the stipulations, which provide for the possibility of liquidating the state through a referendum” (a hint at the unionists who argue for the country to merge Romania by referendum).

Russia held a referendum on constitutional changes between June 25 and July 1, with the main amendment allowing current President Vladimir Putin to run for another two six-year presidential terms in 2024, though there are numerous other changes including a ban on same-sex marriages.

According to the official results, a resounding 77.93% of Russians voted for the changes on a turnout of 65%, however, evidence later emerged of massive ballot stuffing.