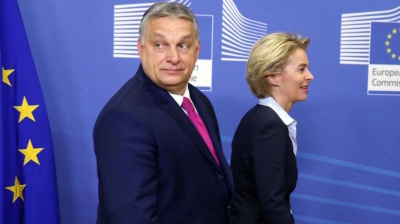 A cumulative US$4.25bn (€3.6bn) was placed through a dollar double tranche (10-year and 30-year maturities), followed by €1bn of a seven-year euro-denominated sovereign eurobond the day after (15 September). According to the Hungarian debt management agency (ÁKK), the change in the funding strategy has been triggered mainly by a possible delay in the disbursement of the “pre-financing payment” in the framework of the EU Recovery and Resilience Fund (RRF).

The disbursement of the pre-financing payments to other EU members already started during the summer. This is aimed at kick-starting the implementation of the investment and reform measures outlined in the respective recovery and resilience plans (RRP). Yet while Hungary’s RRP is still subject to approval, we believe that Hungary’s rush to secure alternative funds was not solely triggered by a possible delay of this pre-payment.

In fact, the amounts that we are talking about are relatively small. In the case of Hungary, the pre-financing payment amounts to 13% of the requested total €7.2bn in grants for projects under the RRF, which would equal €0.94bn in case of full allotment. Needless to say, any new state debt is also not a good alternative to grants from the EU Recovery and Resilience Fund (RRF). The latter do not add to the public debt bill in accounting terms.

So why did Hungarian authorities then rush into this big issue?

We believe the reasons are more or less two-fold, political and market-based. Firstly, we assume that Hungarian policymakers wanted to send a political signal not only to Brussels but also to its electorate. This is nothing new, as ÁKK already once showed its muscles via its smooth access to international debt in a similar situation. Last year, it also lifted its eurobond issuance plans amidst an unfolding spat with the EU and a threat of delayed fund disbursements.

During Fidesz’s 10-year reign the occasional opposition to Brussels has become an efficient tool to impress/mobilise wide parts of the Fidesz electorate in the context of Hungary’s “(economic) fight for freedom”, i.e. the demonstration of its right of self-determination. Fidesz can now sweat out the conflict with the EU easily until the elections, which could bring them additional votes.

As also mentioned by the ÁKK, the fresh funds could be used also for “some government expenditure”, which could be interpreted as a buffer for additional campaign goodies.

Therefore the Hungarian administration seems to be gearing up for a prolonged dispute with the EU, at least until the general elections in spring 2022. The bond issues strengthen somewhat the bargaining position of the Hungarian government in the context of RRF fund disbursements.

Some skirmishes with the EU plus pre-election spending are definitely needed given the fact that we are possibly heading for the most competitive elections in Hungary over the last decade. According to current polls the opposition has a fair chance to win the elections.

Victory for Hungary in the short term

Nevertheless, Hungary’s recent quick-fix on international debt markets is by no means irrational from a market perspective, for the following reasons:

(1) Eurobond funding costs are currently near all-time lows especially in well-established CEE markets, in both dollar and euro segments. In light of the growing prospects of some monetary policy normalisation by leading central banks, it definitely makes sense to lock in the current favourable funding conditions in terms of pre-financing. Regarding the latter Hungary enjoys the comfortable position of facing no eurobond redemption next year.

(2) While this year’s funding progress in Hungary is well on track, its local debt market is getting increasingly expensive in light of an ongoing rate hiking cycle.

(3) As many countries including Hungary are running extraordinarily high “crisis budget deficits” for the second year in a row, the local absorption capacity of its local debt market might be hitting its limits, especially when local currency stability could suffer in case of overstretching local funding sources.

(4) Finally, Hungary’s dollar and euro eurobond markets showed a relatively stronger resilience / less volatility in the past two years when compared to the benchmark markets, not to speak about Hungary’s local currency debt market.

In terms of the composition of the recent deals, finally, the offer was cleverly constructed in our view. Regardless of the relative expensiveness of dollar Eurobond vs euro eurobond funding, to start with a USD dual-tranche ÁKK addressed an investor base that is supposedly not as sensitive to inner-EU political issues as the EUR-based investor base.

Moreover, the dollar EM investor base is much more broad-based and much more familiar with higher-yielding EM sovereigns compared to the international euro market. Therefore, Hungary is possibly here seen more as a high-quality credit and portfolio stabilising element. Moreover, the USD investor base is bigger than the EUR camp and the big international USD deal leaders have huge client bases at their disposal.

It’s also a litmus test to screen overall investor sentiment while flagging a potential second part denominated in EUR the day after incorporated a “first come, first serve” into the USD offers, given the €4.5bn self-imposed limit set by the ÁKK beforehand.

Finally, with Hungary not being in the USD eurobond issuance pipeline since 2014, the high allotments to USD investors definitely cultivates this for a long-time (neglected) client base. With cultivating this client base Hungary increases its re-financing flexibility.

In this context it is worth stressing that since 2019 Hungarian debt management is led by a veteran banker, who is familiar with all the options to optimise the Hungarian market footprint in terms of maturity, market segment resilience and currency structures.

Nevertheless, the recent investor behaviour on the international capital market also leaves a somewhat bitter taste because it shows that the EU's financial whip is not working as expected. So a victory for Hungary in the short term, though we still think that Hungary remains interested in receiving EU funds in the medium and long term and could act a bit more pragmatically after the 2022 elections.

Euro yield curve in yellow, dollar in blue and forint in grey.

Gunter Deuber is the Head of Research at Raiffeisen Bank International in Vienna. Stephan Imre is an economist specialising in CEE fixed income strategy at RBI.

Russian men fleeing the draft are caught between suspected of being pro-Putin and Western closed-door policies
3 days ago
Sanctioned Russian diamonds are reaching the US consumer, but some are getting there legally – for now
5 days ago
EBRD: Reduced gas supplies and inflation to slow growth further in EBRD regions
5 days ago
ING: Eurozone PMI suggests the region may already be in recession
7 days ago
ING: Energy price caps are appealing, but are not without risks
11 days ago