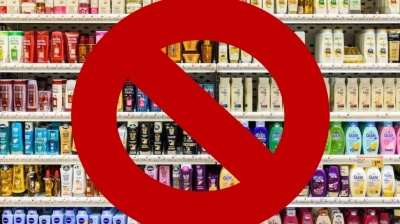 The Minsk local administration Vladymyr Kukharev has ordered goods from western countries that have imposed sanctions on Belarus off the shelves in the latest tit-for-tat measures in the pariah republic’s clash with the West.

“A number of countries have imposed sanctions against Belarus & their goods are on the best shelves in stores..Therefore, I harshly told retailers: either the situation's changing or measures will be taken," the mayor said as cited by Belarus in Sweden, a social media channel run by Belarusian opposition activists.

Western companies and governments have shied away from cutting commercial ties to the regime of Belarus' President Alexander Lukashenko, despite several rounds of some of the harshest sanctions on record and almost universal condemnation, according to a report by Libereco, since the country was plunged into its worst political crisis ever following the disputed presidential elections last year on August 9.

The biggest advertiser is soap powder and household goods manufacturer Procter & Gamble followed by the Swiss-based Nestle. When challenged by activists, Nestle’s PR office said that its advertising budget for Belarus has been “adjusted” but the adverts continue to run.

The advertising caused outrage as they appear in the midst of a regular programme on prime time state TV that profiles opposition leaders and calls for their execution, showing photos of the leaders with a noose imposed on the picture.

The programme has become especially ominous after a Belarusian opposition activist and head of Belarusian House Vitaliy Shishov was  found hanged from a tree in a Kyiv park not far from his home, the National Police Department in Kyiv said on August 3.

According to various reports half a dozen activists and protesters against the Lukashenko regime have been found hanged in the last year.

However, the sanctions regime is targeted and is estimated to have only hurt 5-12% of Belarus’ GDP. Most of the sanctions have targeted the country’s raw materials exports and its ability to raise debt on the international capital markets. Western companies, especially in the FMCG segment, have suffered from no restrictions on their business at all to date.