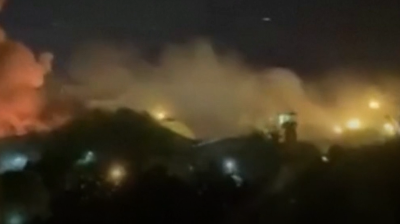 Officials said four prisoners died and 61 were injured during a major fire late on October 15 at Tehran’s notorious Evin prison, a facility where hundreds who have taken part in Iran’s ongoing anti-regime protests have been sent.

BBC Persian reported sources inside the prison as saying the number of casualties was higher.

Videos posted online showed flames and smoke at the site in the Iranian capital, with the sound of gunfire and explosions. Hours after the fire broke out, officials claimed the blaze was extinguished and that calm had been restored throughout the prison.

It was not known whether the fire at the prison, used for the imprisonment of political prisoners, including dual nationals and foreigners, was linked to the demonstrations, now into their fifth week.

State media suggested that the events in Evin prison were not linked to the unrest. An official was quoted as blaming "criminal elements". Speaking to state TV from inside the prison, Tehran's governor said that there was a riot in a prison wing housing petty criminals. Iran's Mizan News said casualties suffered breathing difficulties during a blaze in the prison's sewing workshop.

Fars News Agency initially reported that explosions were caused by mines going off after a prison break when some prisoners, who attempted to escape amid the fire, ended up in a minefield on one side of the prison. Fars later withdrew the report.

BBC Persian said one video posted online appeared to show objects fired into the prison from outside its perimeter, followed by the sound of an explosion.

The unrest that has gripped Iran broke out in mid-September after 22-year-old Iranian-Kurdish woman Mahsa Amini fell into a coma and died in police custody after being arrested by a Tehran morality police patrol for allegedly violating the country’s strict Islamic dress code.

Human rights watchdogs by the weekend concluded that at least 240 people, including around 30 children, have lost their lives amid the unrest. State media said at least 26 members of the security forces had been killed by "rioters".

US President Joe Biden on October 14 called on Iran to “end the violence against its own citizens,” in reference to the deadly crackdown mounted by Iranian security forces against the protests, seen as led by women and young people of Generation Z.

“We stand with the citizens and brave women of Iran,” Biden said. “Women or men should have the right to freedom of expression and assembly,” he added. “Women all over the world are being persecuted in various ways. But they should be able to wear in God’s name what they want to wear, no one should be telling them what to wear.”

Biden also remarked: “It stunned me what it [Amini’s death] awakened in Iran. It’s awakened something that I don’t think will be quieted in a long, long time.”

Also on October 14, a video of anti-riot forces apparently sexually assaulting a female protester while trying to arrest her provoked uproar on social media.

Independent media are not allowed to report from Iran and the authorities have been trying to quell the protests partly by throttling or shutting down the internet.

Verifying the authenticity or otherwise of posted video footage of the unrest is a tall order though some news organisations have put together dedicated teams to do so.