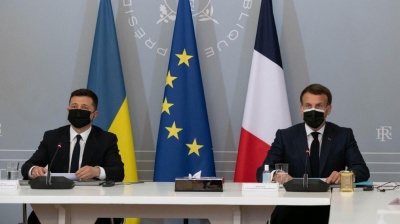 President Macron urged both sides to articulate their conditions for peace. / Image: bne IntelliNews.
By Theo Normanton in Moscow February 6, 2022

French President Emmanuel Macron has called his Ukrainian and Russian counterparts to discuss the future of Ukraine’s breakaway Donbas region. The talks form part of France’s parallel diplomatic effort to rein in Russia, as followed by bne IntelliNews.

Macron held separate talks with President Vladimir Putin of Russia and President Volodymyr Zelenskiy of Ukraine on the night of February 3, as part of an ongoing diplomatic effort to diffuse tensions over the disputed Donbas region.

In its summary of the call, the Elysée Palace said that Macron had highlighted to both sides the importance of articulating the terms of de-escalation and the conditions of a strategic balance in Europe.

He reportedly also stressed the need to accelerate the peace process, stressing the danger posed to European security by the continued troop build-up.

The Kremlin said that the two presidents had discussed "the situation around Ukraine" and Russia's demand for "long-term" security guarantees.

Russia’s demands for peace include a bilateral agreement on European security with Nato which includes guarantees of the “indivisibility of security”. This principle implies that no state should be allowed to reinforce its security at the expense of another state’s security. The USA has expressed a willingness to discuss this principle, according to leaked letters, but Nato has dismissed the idea.

The Kremlin added that Putin "again drew attention to the provocative statements and actions of the Kyiv leadership" in his call with Macron. The Kremlin accuses Ukraine of breaching the Minsk Agreements, which require that Ukraine restores economic ties with the region and liaises with its authorities on ways of achieving peaceful integration with Ukraine.

As one of the members of the Normandy Four, France has an important diplomatic role in the peace negotiations over Ukraine. While America is leading the diplomatic effort on behalf of Nato and the West, France and Germany are expected to stay more neutral in the discussions. This goes some way to explaining why Germany refuses to send military support to Ukraine, and also justifies President Macron’s attempts to play mediator in the conflict rather than allowing the European Union to take up this mantle.

Macron’s talks with Putin have two goals, French government spokesman Gabriel Attal said: “To continue dialogue” and to “push Russia to clarify its position and the aim of (military) manoeuvring.”

Macron plans to visit Moscow and Kyiv on February 7 and 8 respectively, to continue negotiations with both sides.