Many of the headlines about Russia in recent months have quite rightly focused on the geopolitical risks and the sanctions impact on the economy. To that has recently been added the surprisingly abrupt fall in the price of oil and equally precipitous decline in the exchange rate of the ruble. The widely held view is that the Kremlin’s sole priority is the stand-off against the west and the realisation of its political goals in Ukraine, ie that the negative impact on the economy does not matter and that a multi-year period of stagnation is an acceptable price to pay for defending Russia’s national interests.

As always when it comes to Russia, there is some truth in that assumption but much of the conclusion is wrong. Nothing is ever that straightforward in Russia and, in this case, that includes the assumption that the economy will be allowed to stagnate and the people will pay the economic price of the Kremlin’s adventurism.

The evidence of the past nine months of conflict is that (a) President Vladimir Putin has some very clear geopolitical goals which are non-negotiable, no matter what are the consequences, and (b) despite many initially emotionally charged knee-jerk reactions to sanctions imposed by western countries, there has most often been a more moderate or zero follow through on the initial threat. The evidence is of a more pragmatic reflection on the potential damage to the domestic economy and, while not deflecting from the Kremlin’s key goals concerning Ukraine, there has been every effort to mitigate the short and longer term impact on the country’s business and investment climate.

No question, 2015 will be another very tough year for the economy and for the business and investment climate. Overall growth will again be low, if not lower, next year, albeit picking the correct forecast right now is a best guesstimate, given the number of known unknowns still to play out. Inflation and debt service costs will be higher this winter and spending or investment incentives will remain low. Even good news concerning Ukraine is unlikely to bring back investment flows - the required growth catalyst - until next autumn at best.

The more pertinent question is whether President Putin is really interested in repairing the country’s investment credentials and improving the business climate? Are foreign investors and foreign businesses still welcome in Russia and will it again be a country capable of delivering strong growth? Put even more simply, will 2013-15 be viewed as a side-step in Russia’s long-term development or will 2014 be viewed as the start of a long period of growth stagnation and development stasis?

My view is that the former will play out because this suits President Putin’s long held and frequently stated ambition for Russia: to make the country strong and relevant in the international sphere and to slowly but steadily turn the economy into a more diversified and self-sustaining model with greater wealth distribution. We heard this first from him in 2002 and several times since. Whether possible or not, he certainly seems to believe it is and that is a lot more encouraging than the headlines we have been reading for the past nine months.

To explain what I mean I refer to two of Russia’s most important historical figures who have been regularly referred to by Vladimir Putin and whose achievements he seems to want to emulate. Alexander Nevsky lived from 1220 to 1263. He was Grand Prince of Vladimir (a medieval capital of Russia situated 200km east of Moscow) and Grand Prince of Kiev. His military prowess helped defeat the invading German and Swedish forces, while concluding peace deals and paying tribute to the Golden Horde from the east. Piotr Stolypin, who served as prime minister to Tsar Nicholas II from 1905 to 1911, is regarded as the last of the reform leaders in Russia. He is regarded as a major statesman who had strong policy convictions and who undertook major agrarian reforms.

It seems to me that President Putin is trying to balance the achievements and aims of both of these historic leaders, a sort of Nevsky-Stolypin tandem. The graphic below makes some suggestion as to how the different priorities may be separated but, at the same time, occupy an almost equally important place in the president’s priorities. “Almost” because it is clear to all that, right now, the two critical priorities of retaining Crimea and having a “buffer against the west/Nato” in East Ukraine rank above all other considerations. 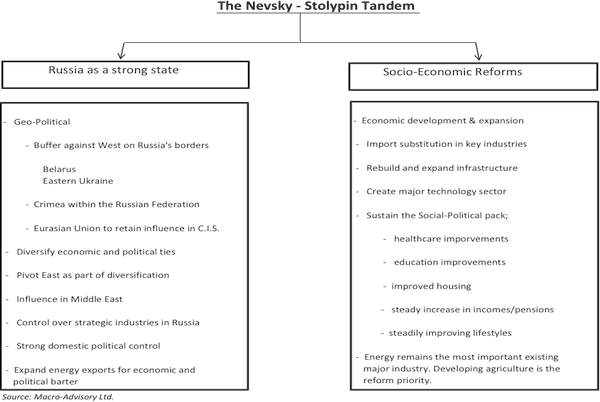 The evidence to support that view - and the view that the Kremlin will do what it can in terms of policy and investment changes once the crisis concerning East Ukraine is eased, to start rebuilding the investment and business case to attract FDI, JVs and PPP investors as well reopen access to international debt markets - is very encouraging even in the midst of the current crisis.

Of course much has to be resolved over the coming months and, as stated, there are plenty of variables still to play out which will determine the macro numbers over the next six to 18 months. But this still looks like a disruption to growth rather than an end. The President’s legacy ambitions suggest he will continue to try and pursue geopolitical and reform priorities with (almost) equal vigor.